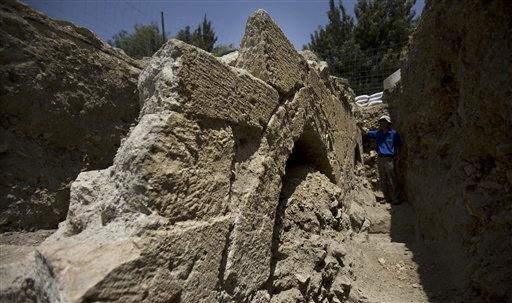 Archeologists said Tuesday they have uncovered a 14th-century aqueduct that supplied water to Jerusalem for almost 600 years along a route dating back to the time of Jesus - but unlike most such finds, this time the experts knew exactly where to look.

Photographs from the late 19th century showed the aqueduct in use by the city's Ottoman rulers, nearly 600 years after its construction in 1320. The photo shows an inscription dating back to the aqueduct's early days.

It was uncovered during repairs to the city's modern-day water system. Public works projects here proceed in cooperation with antiquities officials in a city where turning over a shovel of dirt anywhere can turn back the pages of time, said Yehiel Zelinger, the archeologist in charge of the excavation.

The team has found two of nine arched sections of a bridge about nine feet (three meters) tall on the west side of Jerusalem's Old City, Zelinger said.

Though archeologists knew the aqueduct was there, the find represents the first time they have had a glimpse of the intricate bridge system used for centuries to combat gravity and shuttle water from faraway sources, Zelinger said.

When the population of Jerusalem in biblical times outgrew nearby springs, leaders began to search farther afield, finding a water source near Bethlehem, a winding route of about 14 miles (22 kilometers) away. They built a first aqueduct dating back 2,000 years on the same path of the one found today, Zelinger said.

"It's really amazing and well-preserved," Zelinger said. "This was the source of water for Jerusalem for all the period dating back to the Second Temple," the era of Jesus.

This aqueduct bridge funneled water from Bethlehem and across a valley known as Sultan's Pools into the Old City. It provided the biggest part of Jerusalem's water through the Ottoman period when the city's rulers added a metal pipeline to the stone structure. It was buried shortly after, Zelinger said.

The city hopes to incorporate the find into future construction.