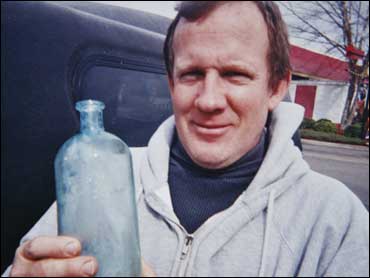 Sam White got hooked on the U.S. Civil War early, digging up rusting bullets and military buttons in the battle-scarred earth of his hometown.

As an adult, he crisscrossed the Virginia countryside in search of wartime relics - 19-century weapons, battle flags, even artillery shells buried in the red clay. He sometimes put on diving gear to feel for treasures hidden in the black muck of river bottoms.

But in February, White's hobby cost him his life: A cannonball he was restoring exploded, killing him in his driveway.

More than 140 years after the end of the war the pitted the North against the South over slavery, the cannonball was still powerful enough to send a chunk of shrapnel through the front porch of a house a quarter-mile from White's home in the leafy Richmond suburb of Chester, Virginia.

"You can't drop these things on the ground and make them go off," said retired Col. John F. Biemeck, formerly of the Army Ordnance Corps.

White, 53, was one of thousands of American hobbyists who comb former battlegrounds for artifacts using metal detectors, pickaxes, shovels and trowels.

"There just aren't many areas in the South in which battlefields aren't located. They're literally under your feet," said Harry Ridgeway, a former relic hunter who has amassed a vast collection. "It's just a huge thrill to pull even a mundane relic out of the ground."

Union troops from the North and Southern Confederate troops lobbed an estimated 1.5 million artillery shells and cannonballs at each other from 1861 to 1865. As many as one in five were duds.

Some of the weapons remain buried in the ground or river bottoms. In late March, a 44-pound, 8-inch mortar shell was uncovered at Petersburg National Battlefield, the site of an epic 292-day battle. The shell was taken to the city landfill and detonated.

White estimated he had worked on about 1,600 shells for collectors and museums. On the day he died, he had 18 cannonballs lined up in his driveway to restore.

White's efforts seldom raised safety concerns. His wife and son Travis sometimes stood in the driveway as he worked.

"Sam knew his stuff, no doubt about it," said Jimmy Blankenship, historian-curator at the Petersburg battleground. "He did know Civil War ordnance."

An investigation by the Bureau of Alcohol, Tobacco and Firearms will not be complete until the end of May, but police who responded to the blast and examined shrapnel concluded that it came from a Civil War explosive.

Experts suspect White was killed while trying to disarm a 9-inch, 75-pound naval cannonball, a particularly potent explosive with a more complex fuse and many times the destructive power of those used by infantry artillery.

Biemeck and Peter George, co-author of a book on Civil War ordnance, believe White was using either a drill or a grinder attached to a drill to remove grit from the cannonball, causing a shower of sparks.

Because of the fuse design, it may have appeared as though the weapon's powder had already been removed, leading even a veteran like White to conclude mistakenly that the ball was inert.

The weapon also had to be waterproof because it was designed to skip over the water at 600 mph to strike at the waterline of an enemy ship. The protection against moisture meant the ball could have remained potent longer than an infantry shell.

Brenda White is convinced her husband was working on a flawed cannonball, and no amount of caution could have prevented his death.

"He had already disarmed the shell," she said. "From what I was told, there was absolutely nothing he had done wrong, that there was a manufacturing defect that no one would have known was there."

After White's death, about two dozen homes were evacuated for two days while explosives experts collected pieces from his collection and detonated them.