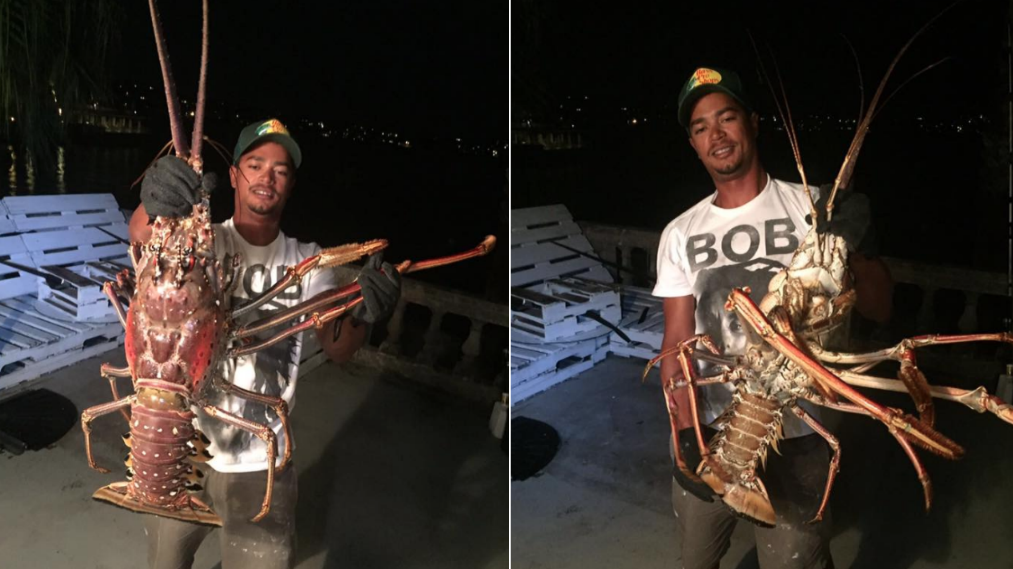 Most people who’ve seen a lobster before would probably say it was about the size of their plate.

But this “sea monster” that a fisherman caught off the coast of Bermuda is a whole lot bigger.

The male lobster weighed in at a whopping 14 pounds, with a four-foot “wingspan.”

Photos of the bright red and maroon lobster went viral online, with many dubbing the creature the “Hurricane Nicole Lobster.”

Lobsters are known to form a chain to come closer to shore a day or two ahead of a storm, Jones explained. So, it’s possible this particular lobster was doing just that.

The day after Hurricane Nicole plowed into Bermuda on Thursday, Jones and his crew hit the water.

Staying close to shore, the group went out in search of gray snappers, which are large predatory fish. Having little luck, aside from catching a bait fish the size of his ring finger, Jones decided to throw in the towel and head home by sunset.

But his friend, Tristan Loescher, a captain with Sanctuary Marine, stayed put, determined to make a decent catch.

In the pitch black, Loescher finally felt his fishing line pull. He jumped forward, pulling up what he hoped would be a gray snapper – and to his surprise, a giant lobster appeared.

Shocked, Loescher snapped some photos with the creature and sent them to Jones.

“It was nuts! It was like, if I had stayed he probably wouldn’t have hooked it, that’s for sure,” Jones joked.

Shortly after showing off his prized catch, Loescher released the lobster back into the water where he belonged.

“We decided it was best to let him go back home,” Jones said.

It’s not the biggest lobster ever recorded – actually, it’s not even close. According to National Geographic, the largest lobster in the world was caught off the coast of Nova Scotia, Canada, and weighed 44.4 lbs.

But it’s still a fun tale to tell, Jones said.

“We were totally surprised that it went viral like this,” Jones said. “We didn’t think any thing of it; it’s nuts.”