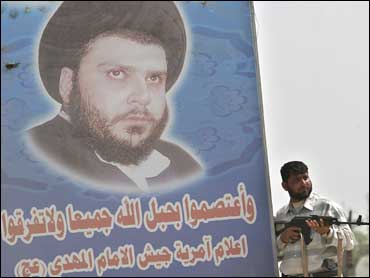 The Iraqi government has dismissed about 1,300 soldiers and policemen who deserted or refused to fight during last month's offensive against Shiite militias and criminal gangs in Basra, officials said Sunday.

The others were dismissed in Kut, one of the Shiite cities where the fight had spread.

But they met fierce resistance and the attack quickly ground to a halt as fighting flared across the Shiite south and Baghdad.

Since then, government officials have revealed that about 1,000 members of the security forces - including an entire infantry battalion - had mutinied, on some cases handing over vehicles and weapons to the militias.

The majority of Iraqi soldiers and police are Shiites.

Speaking in Basra, Khalaf said those dismissed included 421 police officers and 500 soldiers who had not returned to duty in the southern port city and would be tried by military courts.

"Some of them were sympathetic with these lawbreakers, some refused to (go into) battle for political or national or sectarian or religious reasons," Khalaf said.

But he said that those who returned in coming days and could prove they had been prevented from doing so by the militias would be reinstated.

In Kut, a senior police officer said 400 local policemen have been sacked for refusing orders to combat the militias, including the Mahdi Army of anti-American cleric Muqtada al-Sadr.

The officer, who spoke on condition of anonymity because he was not authorized to speak to the media, said the Interior Ministry in Baghdad had ordered the policemen removed from duty on Saturday.

Although fighting in Basra eased in late March, security operations are continuing.

Fighting in Baghdad's Sadr City, a stronghold of al-Sadr's militia, has been ongoing for the past two weeks. Fresh clashes were reported Sunday and at least two rockets or mortar rounds were fired at the capital's Green Zone, which houses diplomatic missions and much of Iraq's government.

A senior military commander said Sunday that Iraqi forces in Basra were expanding their sweep of six neighborhoods, with army and police cordoning off the areas while searching for illegal weapons, ammunition and criminal elements.

Lt. Gen. Mohan al-Fireji said the operation, which started on Saturday, had netted significant amounts of weapons, roadside bombs and drugs. He said a large number of suspects had been detained, but he provided no figures.

Al-Sadr, who is believed to be in Iran, repeated on Saturday his demand for American soldiers to leave the country and urged his fighters not to target fellow Iraqis "unless they are helping the (U.S.) occupation."

Despite the strident rhetoric, however, there were signs that al-Sadr was trying to calm his militia to avoid all-out war with the Americans. Al-Sadr is also under pressure from al-Maliki, also a Shiite, to disband the Mahdi Army or face a ban from politics.

Meanwhile, an Apache helicopter accidentally destroyed a U.S. Humvee in eastern Baghdad when a Hellfire missile missed its target and struck the armored vehicle instead, the military said Sunday.

Two U.S. soldiers and three Iraqi civilians were injured in the incident on Saturday, the statement said.