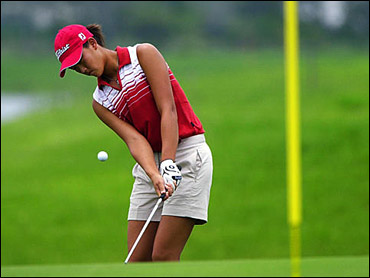 Golfing phenom Michelle Wie now has a national championship to go with her unlimited potential.

The 13-year-old Wie outlasted 21-year-old Virada Nirapathpongporn for a 1-up victory Sunday at Ocean Hammock to become the youngest winner in the 27-year history of the U.S. Women's Amateur Public Links.

Wie tapped in her 2-foot par putt on the 18th green and raised her right arm to celebrate the victory.

"I'm happy out of my mind," said Wie, who graduated from eighth grade last month. "I like beating a lot of people. I'm glad I survived all those matches."

Wie is the youngest player to win any adult U.S. Golf Association event. Laura Baugh was 16 when she won the U.S. Women's Amateur in 1971.

The 5-foot-11 Wie has competed against the men in her home state of Hawaii, trying unsuccessfully to qualify for the Sony Open on the PGA Tour in January. She played in the final group at the Nabisco Championships in March, the first LPGA Tour major of the year.

She will play against the men on the Canadian Tour in August, and on the Nationwide Tour in September.

But this was the longest week of her career - 36 holes of qualifying, followed by five 18-hole matches to reach the finals, and 36 holes against an NCAA champion who gave Wie all she could handle on a sticky, sweltering afternoon along the Atlantic Ocean.

Nirapathpongporn grabbed a 4-up lead after eight holes, nearly holing out from the third fairway and sticking her approaches inside 10 feet.

"I was about to give up," Wie said. "She didn't give me a chance to make birdie."

Wie got back into the match with her awesome length, pounding drives that approached 300 yards and at times putting her some 80 yards ahead of the 21-year-old Thai. She tied the match with an 8-foot birdie on the 14th, and pulled ahead in the final stretch of the last 18 holes.

"In the afternoon, I just didn't make any putts," Nirapathpongporn said. "Michelle played great. She was one shot better. That's why she deserved to win, why she's holding that big trophy."