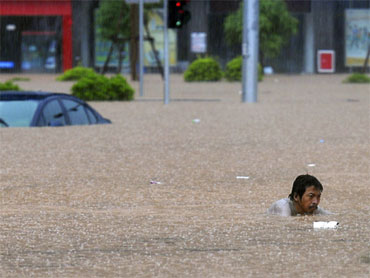 Unusually heavy seasonal flooding in China has killed at least 155 people and forced more than 1 million to flee as water levels in some areas reached at their highest in more than a decade, the government reported Saturday.

Virtually all of the country's major rivers were swollen, while water levels in lakes along the mighty Yangtze River were higher than in 1998, when catastrophic flooding killed about 4,000 people.

The office said 140,000 houses had collapsed and more than 1.3 million people had been moved to temporary shelter. Overall losses were about four times what they were last year, it said.

Heavy rain has been falling since April, with 13 torrential storms on record already this season.

Flooding strikes along the Yangtze almost every summer, although authorities had claimed that construction of the massive Three Gorges Dam along the river's upper reaches would help modulate water levels and prevent major losses.

The office did not say what if any role the dam had played in controlling flood waters, although it said officials responsible for anti-flooding measures had been ordered to monitor and adjust levels wherever possible.