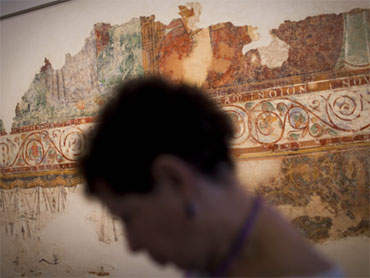 A rare Crusader-era fresco from Jerusalem's Garden of Gethsemane has been unveiled to the public for the first time.

The fresco depicts the Deisis, a famous Biblical scene featuring Jesus, Mary and John the Baptist praying. It was discovered by chance in 1999 as officials worked to preserve sites affected by winter flooding.

Curators at the Israel Museum believe the full 12th-century fresco was about 30 feet tall. Only the bottom section, showing feet, now remains.

The fresco went on display Monday when the museum reopened after a renovation.

Only two similar frescoes have been found near Jerusalem. Archaeologists say all others were destroyed by Saladin when his troops captured Jerusalem in the name of Islam in 1187.