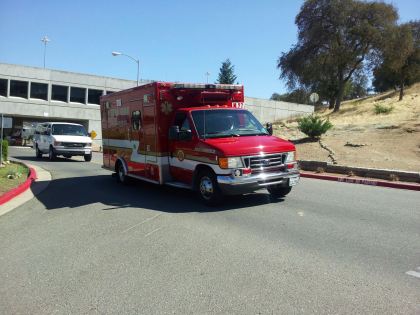 (CBS/AP) FOLSOM, Calif. - A riot Wednesday at a California prison holding many of the state's most hardened criminals left 11 inmates hospitalized, including one who was shot by correctional officers.

The disturbance inside a yard at the California State Prison, Sacramento in Folsom involved an unknown number of inmates after it broke out shortly after 11 a.m., said Terry Thornton, a spokeswoman for the California Department of Corrections and Rehabilitation.

In addition to the inmate who was shot, at least 10 were either stabbed or slashed during the riot, Thornton said. Their conditions have not been released and no other injuries have been reported.

Prison officials still don't know how many inmates were involved nor a possible motive, Thornton added.

"To our knowledge there has been no tension on the yard," said state corrections Lt. Tony Quinn, CBS Station KOVR Sacramento reported. He also added: "Just based on the injuries, we know that they were stabbing-type devices, ice-pick style weapons."

On the question of whether the riot was brought on by gang retaliation, Quinn said it would take some days to sort it out. "We'll go over the surveillance video. Sometimes in these riots guys are just trying to get out of the way. They're not really involved, so it takes a day or two to try and figure out who was actually involved and who was just a victim of wrong place, wrong time."

It is at least the second known incident within a year at the 2,800-inmate maximum-security facility that opened in 1986 commonly known as New Folsom, due to its proximity to the more well-known Folsom State Prison, located 20 miles east of Sacramento.

Eleven inmates were hospitalized, including one shot by officers, after a riot that involved 150 inmates in December. One officer was injured during the confrontation.

The fight occurred in the exercise yard of a housing unit.

The same prison that mostly houses inmates serving long sentences and has a sizable prison gang population was also the scene of a riot in May 2011 that sent six inmates to outside hospitals, two with serious injuries.

It's also located next to the Folsom State Prison, a medium-security prison that opened in 1880 and is the second-oldest prison in California. It houses more than 3,100 inmates.