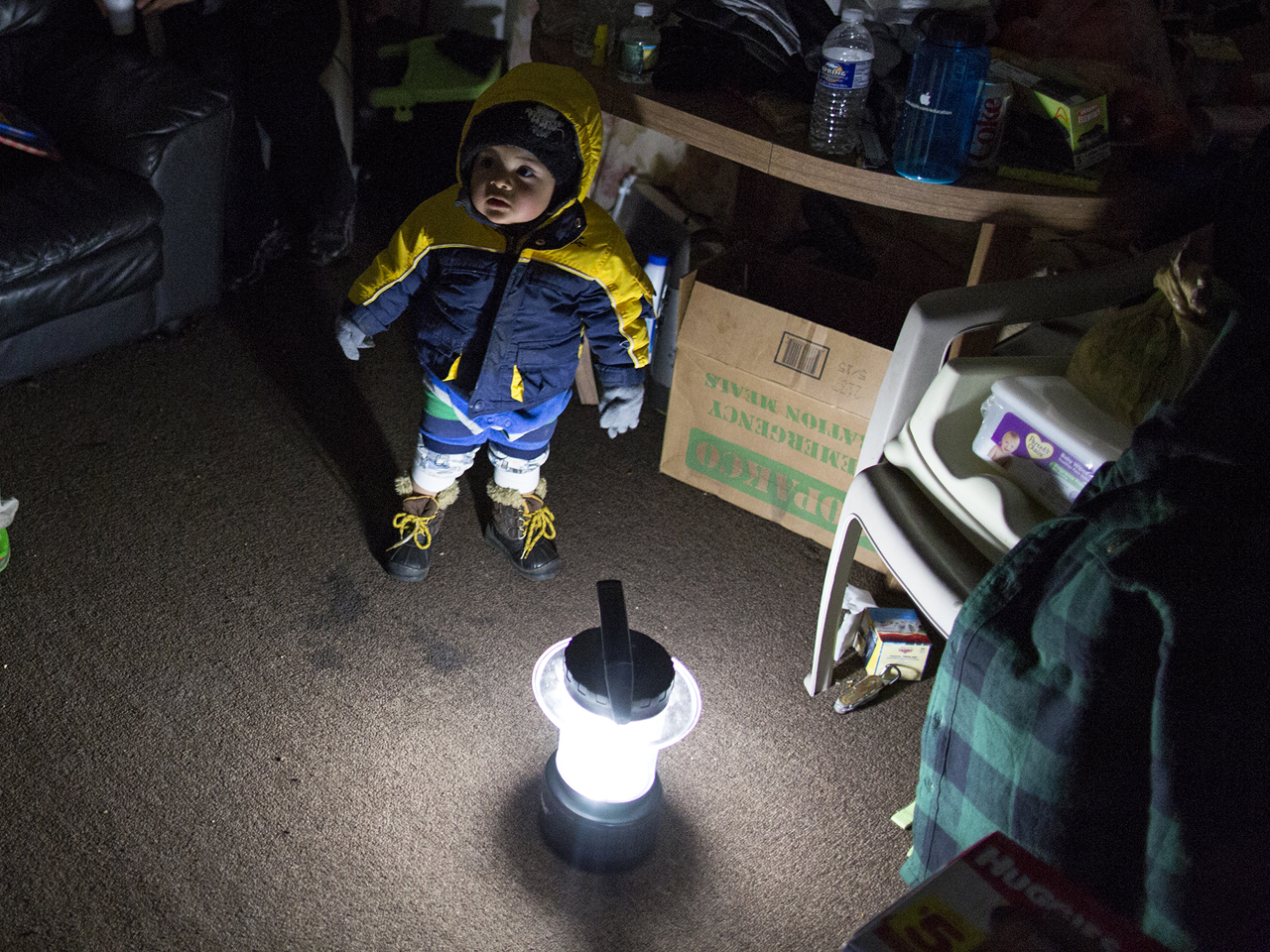 Eleven days after Hurricane Sandy made landfall, hundreds of thousands of utility customers in New York and New Jersey are still without power - and they want answers.

Unfortunately, the answers provided by the power companies have generated even more anger and frustration.

When asked Thursday night when power may be restored, LIPA Chief Operating Officer Michael Hervey told CBS Station WCBS the utility is aiming for the middle of next week. WCBS reports one spokesman suggested power may not be fully restored until Thanksgiving.

On Friday LIPA reported 163,029 customers in Nassau and Suffolk Counties and the Rockaway Peninsula were still without power. That figure includes thousands who had lost power in this week's nor'easter, many of whom have had service restored. Families, the elderly and the disabled have no heat or electricity.

Customers have complained not only about the pace of work being done on Long Island but also about poor communications between LIPA and the public.

In Great Neck, many still don't have power. "Where are the boots on the ground? We keep hearing that there's added crew, there are so many people working. We're not seeing them," Nassau County Legislator Judi Bosworth told WCBS.

Bosworth also complained about LIPA's communication on the crisis. "They can't tell us if we'll have power in two days, in three days, in a week, in two weeks," she said.

Below: Watch WCBS's Jennifer McLogan report on the frustrations of Long Islanders still without power.

On Friday LIPA COO Hervey said the utility lost two days of progress in the restoration because of damage and further outages caused by the nor'easter.

Wednesday's storm caused more than 120,000 outages, by Hervey said power to half of those customers has been restored.

"It was fairly devastating," Hervey said.

The utility also said it has more than 14,000 workers dedicated to the restoration effort, including more than 8,200 field crews from across the country and Canada - and another 1,200 linemen are expected to join the effort today.

Many Long Islanders went to the Island Park FEMA Center Thursday night for food and supplies, but Elyse Schwartz of Oceanside told WCBS she and her two kids needed a place to stay.

"It's a nightmare, and I'm just living each minute. We don't know what's gonna happen the next minute," Schwartz said.

At the Merrick Library, which is being used as a warming center, Nassau County Executive Ed Mangano got an earful from frustrated homeowners on Thursday.

Homeowner Richard Feldman called the recovery effort a failure. "There are tens of thousands of people out there, like me, with no home," Feldman said.

Tempers flared when Mangano tried to explain that LIPA is controlled by the state, not the county.

"So where is the state representative that is demanding LIPA give some answers to people? Where have they been for 11 days?" one woman asked.

"I share your frustration," Mangano said - to which the woman quickly replied, "You have power in your house, you don't share my frustration."

Customers were further angered by word that homeowners living in Long Island's flood zone - from the Moriches to the Rockaways - were told by LIPA they need an electrician to certify it is safe to turn the power back on before the utility will restore service - even for homes that suffered no water damage, CBS correspondent Jennifer McLogan reported.

"I was told now that if you don't get that certificate that LIPA's going to come around and take your meter off your house, and then you'll have to pay a licensed electrician to come back and give you a new meter," Oceanside homeowner Renato Scaglione said.

New York Newsday now reports that two county executives on Long Island - Mangano and Suffolk County Executive Steve Bellone - announced that LIPA will scrap its policy requiring homeowners obtain new electrical evaluations before they can get their power turned back on.

Newsday also reports LIPA has been criticized for failing to implement recommendations made in a 2006 report that may have better prepared the utility for the massive storm.

Plainview resident Al Gerstein told WCBS that his housing development lost power at 6 p.m. on Oct. 29, and has been in the dark ever since.

"We have called every elected official in the area, we filed a formal complaint with the public service commission, no one is getting back to us," Gerstein said. "LIPA has a recording on with no information concerning our area. We have not gotten one answer. It's been a disaster."

Gov. Andrew Cuomo has demanded investigations of utilities that aren't working quickly enough. He called LIPA archaic and in need of an immediate overhaul.

"We paid them and we gave them a franchise because they represented themselves as experts in doing this and they failed - and they should be held accountable for their failure," Cuomo said.

Cuomo said the region will need a long-term recovery plan, but many residents said they only worry about where they will sleep, or their next meal.

Residents said they are at the end of their ropes.

"I'm very frustrated. We have no electricity. I haven't seen one LIPA truck, no help from everyone. I can't believe this is America. This is the richest country in the world and we help everybody. Where is everybody to help us?" Esther Ackerman of Oceanside told WCBS correspondent Dick Brennan.

"Something has to be done, we have elderly people on this block," said Lucy Capicchioni of New Hyde Park.

Con Ed has also been harshly criticized for its post-storm response but the utility said that won't keep them from seeking a rate increase, WCBS reports. The company hasn't said how big a hike it wants, but it would take effect next October.

Repair crews yesterday were fixing cable service in Chappaqua, N.Y., but some say Con Ed workers were nowhere to be seen as they suffered through the 11th day without power.

Burke said Con Ed can tell people what day their power will be restored now.

In New Jersey about 210,000 customers are still without power.

In Connecticut, however, nearly all residents and businesses have their power back on.