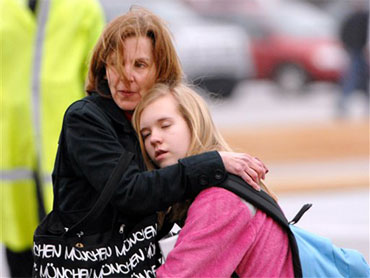 A short-circuit caused by an overheated refrigerator motor sparked a fire Monday that quickly ate its way through an overcrowded cell block in a northern Honduras prison Monday, suffocating or burning to death 103 gang members.

Hundreds of concerned relatives rushed to the prison desperately seeking information as prison officials placed the bodies of dead gang members in rows on the ground, their elaborate signature tattoos visible on exposed chests and arms. The bodies were later removed and transported in refrigerated trucks to other sites.

Vice President Vicente Williams and the defense and interior secretaries immediately traveled to the prison in San Pedro Sula, 180 kilometers (110 miles) north of the capital, Tegucigalpa.

President Ricardo Maduro told an Associated Press reporter Monday in Rome that he would cut short a European state visit in response to the fire, the latest tragedy to overwhelm the country's outdated and vastly overcrowded prisons.

A little less than a year ago, a violent clash between imprisoned gang members left nearly 70 people dead, including guards and visitors.

Monday's fire broke out after a refrigerator motor overheated, causing a short-circuit and subsequent explosion in a cell block housing 186 gang members, Police Commissioner Wilmer Torres said. The prisoners had two small refrigerators for soft drinks in the cell block, he said.

At least 103 prisoners were either burned to death or died from smoke inhalation while 25 others were taken to area hospitals with injuries. Torres said there were no prisoner escapes. Most inmates were asleep when the fire broke out about 1:30 a.m. (1830 GMT).

"Everything happened fast," prisoner Jose Mauricio Lopez told a Honduran radio station from his hospital bed. "We woke up with our clothes and our beds in flames."

Another prisoner, identified as Antonio Flores, said he heard an explosion "and then the cell block caught immediately on fire."

As word of the blaze spread, hundreds of the inmates' family members began gathering outside. Authorities closed off all streets near the prison as police, rescue crews and army troops worked to control the situation.

Firefighters brought the blaze under control quickly, but it already had consumed a large part of the jail when they arrived.

Prison spokesman Commissioner Jose Bustillo said many of the gang members started to attack the firefighters when they arrived, prompting guards to fire in the air "to prevent a massive prisoner escape."

One of the surviving prisoners, Pablo Cardona, however, claimed that guards "fired at us repeatedly from outside the cell block to stop us from leaving, despite our cries for help."

Many of the imprisoned gang members were detained during the country's recent crackdown on gang violence. In August, Maduro succeeding in passing legislation outlawing gangs and establishing minimum sentences of 12 years for gang members.

The new law has seriously exacerbated already severe overcrowding in the country's jails. Honduras' penitentiaries consist of 27 old buildings housing 13,000 prisoners, twice their capacity. The prison in San Pedro has room for 800 prisoners, but held 1,960 at the time of the fire, Torres said.

"This is a horrible tragedy," San Pedro Sula's Auxiliary Archbishop Msgr. Romulo Emiliani said when he arrived at the jail. "And the situation is worse because there are too many people in a single cell. ... This shouldn't happen."

Human rights groups who have pushed for alternatives to jail terms for young gang members demanded a serious investigation.

"In Honduras, there is a government policy that tends to result in the deaths of young people," said Bertha Oliva, director of the non-governmental association Committee of Families of the Disappeared. Oliva was referring to the more than 2,000 gang members who have been killed in the past five years and whose alleged crimes have not been fully explained by the police.

"What happened in the San Pedro Sula jail is painful and terrible," said Jose Manuel Capellin, of the humanitarian group Casa Alianza. "There is repression against the gang members. The government only offers them jail."

Maduro said his administration was trying to improve prison overcrowding. "We've already taken steps in this direction," he told the AP on Monday. "We already knew we had a problem with overpopulation."

All of the prisoners in the affected cell block belonged to the Mara Salvatrucha, one of the most violent of Central America's gangs.

There are more than 100,000 gang members belonging to 500 different gangs in Honduras. Most of the members are between 8 and 35 years old.