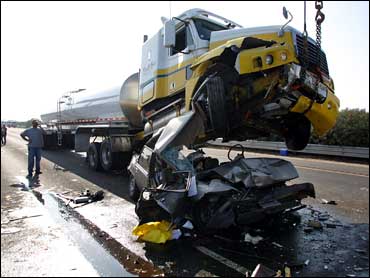 Dense fog along a busy highway was blamed for a massive pileup of as many as 100 cars, killing two people and injuring dozens, the California Highway Patrol said.

At least nine big rigs were involved in the pileup on northbound Highway 99 just south of Fresno, CHP officials said. No hazardous materials were spilled.

"It looked like something out of a movie, walking up and seeing all the cars mangled and crushed," said CHP Officer Paul Solorzano, Jr.

A 5-year-old boy and a 26-year-old man traveling in separate vehicles were killed in the chain-reaction collisions around 7:45 a.m., he said.

"There was probably two-foot visibility in the fog when I got here. It was really bad," said Mike Bowman, a spokesman for the California Department of Forestry and Fire Protection. "It looked like chaos. Cars were backed up on top of each other."

"Everybody was trying to miss everybody, but it was impossible not to get hit," said Cindy Ramirez, 21, of Selma, whose purple Mazda pickup truck was rear-ended. "I'm fine physically, but I keep thinking about all of the things that could have happened."

Hours after the accident, the freeway was littered with smashed cars and trucks, broken gas, auto parts and blood. A big rig carrying stacked crates of live turkeys was stranded on the normally busy highway.

Crash victims sat near the wreckage, waiting to be interviewed by investigators.

The freeway's northbound lanes were shut down indefinitely as investigators worked to determine the cause of the crash. Traffic backed up for miles south of the wreckage. Southbound lanes remained opened.

The California Highway Patrol arrested one of the drivers involved in the pileup. He's charged with drunken driving, although police don't think he caused the crash.

Thick seasonal fog known as "Tule fog" typically occurs in Central California in the late fall and winter. A stretch of the highway several miles south was the scene of an autumn 74-car pileup nearly a decade ago that left two people dead.