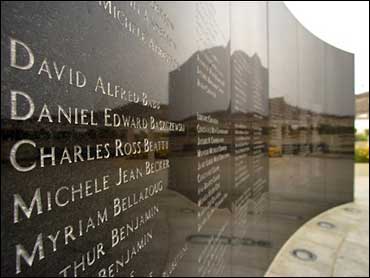 The families of those lost aboard TWA Flight 800 remembered their loved ones Monday on the 10th anniversary of the crash, leaning on each other for strength as they tried to cope with the emotions brought on by the day.

"The families are embracing one another, taking solace and strength from each other as they have done over the last 10 years," said John Seaman, head of the TWA Flight 800 family association and the uncle of victim Michele Seaman, 19, of St. Petersburg, Fla.

"They have come together to mark this milestone, so precious in their lives," said Seaman.

Seaman was among the first to arrive at a memorial at a white, sandy beach near where 230 people lost their lives on the Paris-bound flight. Later in the day, hundreds of relatives, friends and rescue workers were expected to mark the anniversary there.

Only minutes after taking off from Kennedy Airport on July 17, 1996, TWA Flight 800 exploded in a fireball, raining down carnage on the Atlantic Ocean off Long Island.

Initially, investigators were not sure if the calamity that killed all 230 people aboard the flight was caused by a bomb, a missile or mechanical failure. Following an exhaustive investigation that lasted four years, officials determined that TWA 800 was destroyed by a center fuel-tank explosion — likely caused by a spark from a short-circuit in the Boeing 747's wiring that ignited the tank's volatile vapors.

Despite the finding, conspiracy theories linger. A lawsuit was filed last week by the East Falmouth, Mass.-based Flight 800 Independent Researchers Organization, which claims federal investigators found a key piece of debris proving a missile brought down the aircraft and are now concealing evidence of its existence.

"There may be entertainment value but each time there's a show on conspiracies their healing wounds are ripped apart," Seaman said earlier.

"I guess when anything like this happens ... there will always be a segment — although this segment is pretty small — of people who for whatever reasons, they like to keep their names in the news or whatever, who honestly believe in these conspiracy theories," said Robert Francis, the former vice chairman of the National Transportation Board, who led the investigation.

Francis said in a telephone interview that he planned to attend Monday's memorial service at Smith Point County Park, along with various dignitaries.

Former New York City Mayor Rudolph Giuliani, who won praise for his leadership and compassion in the days following the disaster, has a scheduling conflict and is not expected, his spokeswoman said Friday.

The memorial garden features stone benches and massive black stone tablets that tell the story of the victims and their rescuers. It honors the 230 people from 14 countries who perished, as well as the hundreds of police officers, firefighters, rescue workers and boaters who raced to the fiery scene.

In addition to the dedication of the recently completed memorial at 3 p.m., there will be a prayer service at 7:30 p.m. followed by a candlelight ceremony culminating with a U.S. Coast Guard aircraft fly-by and the placement of a memorial wreath in the ocean, said Frank Lombardi, a spokesman for the memorial organizing committee.