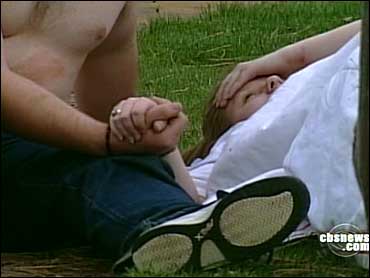 Residents of Littleton, Colo. are holding a candlelight vigil tonight on the eve of the 10th anniversary of the Columbine High School massacre.

The school will be closed all day tomorrow as the town remembers the gunfire that took 13 innocent lives, as CBS news correspondent Mark Strassmann reports.

Ten years later, the Columbine community still grapples with the ghosts of that terrible day.

Principal Frank DeAngelis also found his entire school in the crosshairs of two rampaging Columbine students: Dylan Klebold and Eric Harris. They massacred 12 schoolmates and one teacher, before killing themselves.

"We will never be normal. I mean get back to normal," DeAngelis said. "We just had to redefine what normal is."

No one more than grieving Columbine parents like Dawn Anna, who lost her daughter Lauren Townsend that day.

"That hole in my heart is as big as it was then. The loss of Lauren, that hole never gets smaller," Anna said. "You try to make your heart bigger. So the hole doesn't seem so huge."

And ever since Columbine, millions of Americans have worried more about safety gaps in their own kids' schools.

What happened at Columbine was a defining moment for America. But 10 years later, many people in the Littleton community refuse to let it that awful day define them.

"It's much more notorious away from here," said Doug Bell, editor of the weekly Columbine Courier.

In this bedrock suburb of Denver, residents no longer dwell on the shootings.

"They've moved on very well. But will they ever forget it? No," Bell said.

Of all the images from that day, one stands out. A boy struggling out of a shattered window, pulled down by a SWAT team meber on top of a truck, tumbling to safety. That boy was Patrick Ireland.

"My entire instinct was for survival. Get out. As quickly as you can," he recalled.

Ireland had been shot twice in the head. He had to relearn how to walk and talk. Now he is a successful financial planner.

"I feel very grateful and very proud of what we as a community - and me as an individual - have been able to overcome and achieve," he said.