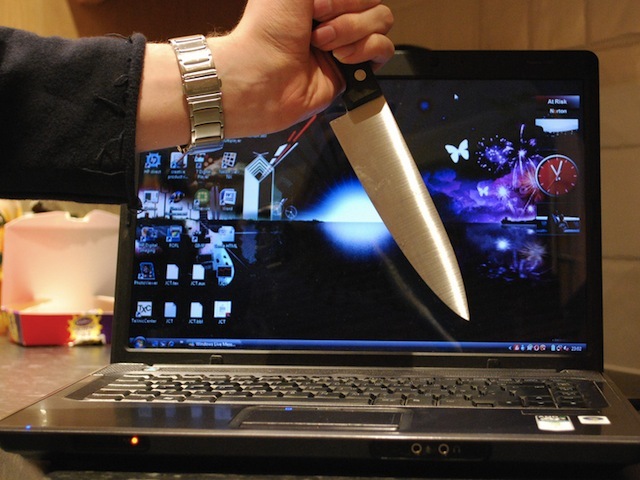 (MoneyWatch) COMMENTARY I'm always telling people that the easiest way to shoot yourself in the foot and screw up big-time is by opening up your big mouth and blurting out something you shouldn't to your boss, a big customer or the media.

These days, I think the computer has surpassed the mouth as the most common instrument of work-related self-destruction. I don't know why, but some of the most embarrassing, compromising and just plain dumb things I've ever seen or done at work involved a computer.

Not only did these "10 things you should never do with your computer" come to mind all-too-easily, I bet each and every one of you can come up with at least as many. And just so you know, it isn't easy to come out of the closet with some of this stuff so I hope you appreciate the hard-earned lessons.

Hit "reply all." We all have horror stories about inadvertently hitting "reply all" on an email, but the most embarrassing one I know is one I received, not one I sent. It was from a fed-up executive to one of his managers where he candidly named several employees the manager should consider firing. He sent it to the entire group, including the "losers." No, I wasn't one of them.

Forget to save a critical presentation. I once opened a Powerpoint file from an email attachment and used it as a template for a really critical presentation. Over the course of a week I worked on it, edited it, and saved it -- unknowingly to a temporary file. When I shut down the PC, the whole pitch was lost. It was for an executive meeting the following day.

Mix it with alcohol. Computers and booze just don't mix, and I mean that literally as well as figuratively. The worst feeling is reading an email or message you sent when you were "over the limit" the previous night. And trust me when I tell you that sophisticated semiconductor chips don't like wine, red or white. Also, don't even think about taking it to a party to show off some pictures or a video. Big mistake.

Leave it unattended anywhere. I know this sounds obvious, but according to ZDNet, a laptop is stolen every 53 seconds, 97 percent are never recovered and one in 10 are stolen within the first year of purchase. I know people who've had their notebooks stolen out of a car while pumping gas and while going through the X-ray checkpoint at the airport. And definitely don't leave it unattended when you pick up your grande cappuccino at Starbucks.

Send or post anything you wouldn't want to appear on the Yahoo home page. Privacy is more or less an illusion these days. You'll live a far happier and less stressful life if you just assume that anything you send or post -- email, video, picture, tweet, anything -- might end up as public information.

Destroy your boss's data. Back in the day when it was all-too-easy to do this, I accidentally formatted the hard drive of my boss's laptop and wiped out everything. I mean everything. As soon as I hit "return," I knew what I'd done and my heart sank. No, I didn't get fired, but my boss couldn't talk to me for a day or two.

Drop it. When I used to travel constantly, I had a notebook that was dropped so many times the LCD screen became unhinged from the rest of the PC except for a couple of ribbon cables holding it together. I brought it to IT and, when we tried to boot it up, all it would do was let out a series of beeps. It was the same pattern, over and over. It took a while but we eventually figured out it was beeping Morse code for SOS.

Let it know you're in a time crunch. Don't ask me how it happens, but it'll crash, act up, or start doing something bizarre you'd swear it's never done before just so you miss your deadline. It's one of the great mysteries of the universe.

Throw it. Nobody in his right mind would admit this, but throwing small appliances in a fit of rage is certainly nothing new. If it's nearby and not attached to anything, it's fair game. I actually know a guy who got really angry -- I mean over-the-top, seeing red angry -- and threw his laptop at someone at work. He missed and it hit the wall but he still got fired. Personally, I think the guy's nuts but who knows.