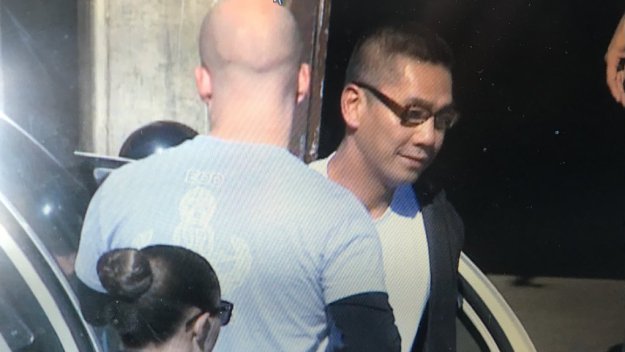 SANTA ANA, Calif. -- The Orange County Sheriff's Department has confirmed that 43-year-old Bac Duong has been captured one week after he and two others staged a daring escape from a California jail.

Duong allegedly contacted a witness and said he wanted to turn himself in, according to the Orange County Sheriff's Department.

Duong was arrested in an industrial area of Santa Ana, Calif., and CBS radio affiliate KNX reports that law enforcement was continuing to search the area after Duong's midday arrest.

Duong escaped with cellmates Hossain Nayeri, 44, and Jonathan Tieu, 20, one week ago. Authorities believe they used a power tool to cut their way through a steel grate in their cell, climbed through plumbing tunnels -- cutting through as many as four more barriers -- and made their way to the jail's roof. Once there, they used a rope made of braided bedsheets to rappel four stories to freedom from the roof of the Orange County Central Men's Jail.

They had been held in a dormitory with about 65 other men in Santa Ana, about 30 miles southeast of Los Angeles.

Duong told investigators he had been with the other two fugitives in San Jose on Thursday and that the men may be headed to Fresno, Orange County Sheriff's Lt. Jeff Hallock said. It was unclear how Duong got back to Southern California.

"If they are watching, we want them to understand that we are pressing forward, and we are coming after them," Hallock said at a news conference Friday evening, addressing the escapees directly for the first time. "We will take you back into custody."

CBS Los Angeles reported the escapees may be living out of a stolen 2008 white GMC Savana utility van, now possibly with tinted windows, according to Hallock. The vehicle had paper license plates that read: 8U66466, but Hallock said the plates have been removed and replaced.

Hallock said Thursday that investigators believed Duong stole the vehicle from someone after responding to a sales ad and taking it for a test drive.

Duong's capture comes one day after teacher Nooshfarin Ravaghi, 44, was arrested for allegedly giving Nayeri a Google Maps satellite image of the jail, which may have played a central role in the Jan. 22 escape.

Ravaghi is facing a charge of accessory to a felony, and prosecutors plan to request her bail be set at $500,000, according to Orange County sheriff's Lt. Jeff Hallock. Ravaghi will be arraigned Monday, Hallock said at a press conference today.

Nayeri attended several of Ravaghi's English as a second language classes in the Orange County Central Men's Jail, Hallock said. Ravaghi worked for the Rancho Santiago Community College District and taught at the jail for about 18 months, according to Hallock.

It is not clear why Nayeri, a 44-year-old former U.S. Marine who grew up in central California, was in Rayaghi's class.

Hallock described Ravaghi's relationship with Nayeri as, "Much closer and much more personal than it should have been."

Ravaghi allegedly acknowledged to investigators that she gave Nayeri a printout of a Google Maps satellite image that showed the jail complex and surrounding area.

Hallock said the ongoing manhunt has led to about 10 arrests so far, in addition to Duong's capture, with several other arrests made in connection with unrelated arrest warrants or probation violations. None of those arrests were of jail employees.

The investigation has centered on a Vietnamese gang in the nearby cities of Westminster and Garden Grove with ties to two of the inmates.

On Thursday night, authorities served warrants at a residence and a warehouse in Westminster, but Hallock said no arrests were made.

Tieu, Duong and Nayeri had all been awaiting trial for unrelated violent crimes.

Tieu is a 20-year-old who is accused of murder and attempted murder. Court documents obtained by 48 Hours' Crimesider allege that Tieu is in a gang known as "TRG," or "Tiny Rascal Gang." Prosecutors say he shot and killed one man, and injured a juvenile, after a March 2011 fight that involved several gangs. More than 10 people were arrested in raids following the murder. Tieu was being held on $1 million bond in the case.

Duong is accused of shooting and badly injuring a man in November 2015. He was being held without bond since last month on charges of attempted murder, assault with a deadly weapon, shooting at an inhabited dwelling and being an ex-felon in possession of a firearm. Duong is also believed to be associated with a gang, Hallock said.

Nayeri had been held without bond since September 2014 on charges of kidnapping, torture, aggravated mayhem and burglary. Nayeri and three other men are accused of kidnapping a California marijuana dispensary owner in 2012. They allegedly drove the dispensary owner to a desert spot where they believed he had hidden money and then tortured him using fire and bleach, before cutting off his penis, authorities said.

The man was allegedly left for dead in the desert, but survived.

Police say Nayeri fled the U.S. to his native Iran, where he remained for several months. But in 2014, investigatory say they used a ruse to get Nayeri to the Czech Republic, which has a strong extradition relationship with the U.S. He was arrested in Prague as he was changing flights from Iran to Spain to visit family.