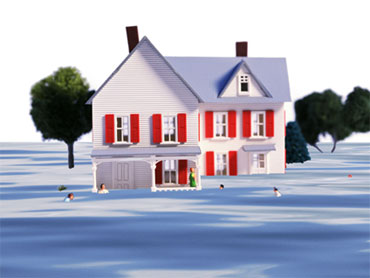 Nearly a quarter of U.S. mortgage holders owe more on their loans than their houses are worth, according to a report today in the Wall Street Journal.

Data from First American CoreLogic, a Santa Ana, Calif.-based real-estate information company, shows that in the third quarter of 2009 almost 10.7 million households had negative equity in their homes.

Despite good news on the house resales front - it was reported Monday that home resales far exceeded expectations last month, climbing to the highest level in 2½ years, due in part to a first-time buyers' tax credit - the Journal's Ruth Simon and James R. Hagerty write that this swelling of "underwater mortgages" threatens the prospects of a sustained housing recovery.

These properties are more likely to fall into foreclosure, ultimately being dumped by banks and mortgage holders onto an already-saturated market, depressing falling house prices even further.

The First American report said that more than 520,000 of borrowers whose mortgages are at least 20% higher than their home's value have received a default notice.

Negative equity "is an outstanding risk hanging over the mortgage market," Mark Fleming, chief economist of First American Core Logic, told the Journal. "It lowers homeowners' mobility because they can't sell, even if they want to move to get a new job."

According to the analysis, homeowners in Nevada, Arizona, Florida and California are more likely to be deeply underwater. In Nevada, for example, nearly 30% of borrowers owe 50% or more on their mortgage than their home is worth, said First American.

For more read the complete article at wsj.com, and check out the Journal's Interactive Map: State-by-State Data on "Underwater Borrowers."