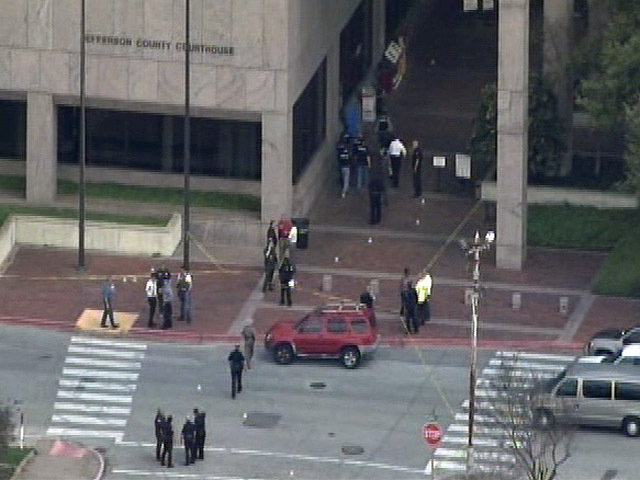 (CBS/AP) BEAUMONT, Texas - A man on his way to court with family members opened fire outside a Southeast Texas courthouse Wednesday, killing one person and wounding at least three others, police said.

The gunman had been inside the Jefferson County Courthouse in Beaumont but went out to his pickup truck shortly after 11 a.m., drew a weapon and began shooting, police said.

A detective outside the courthouse fired back. He quickly was joined by law enforcement officers from nearby buildings, police said.

The gunman retreated to his truck and, still firing, ran over one of the people who had been shot as he drove away. He drove about three blocks and abandoned his truck in the middle of the street before entering a nearby business, police said.

With hostages inside, the gunman spoke by phone to police and told them he was wounded. He eventually surrendered and was taken to an area hospital, where he remained in custody Wednesday afternoon but had not been formally charged.

"It was crazy," Beaumont Police Chief Jimmy Singletary said. "He was shooting. Our guys were shooting. It was a classic shootout."

A pickup truck riddled with at least a dozen bullet holes remained in the middle of the street Wednesday afternoon. Authorities were still picking up fired shell casings from the scene.

Authorities did not say why the suspect was at the courthouse Wednesday morning. They declined to identify the victims or the type of weapon the gunman used.

Judge John Stevens spoke to CBS affiliate KFDM Beaumont that the suspect, Bartholomew Granger, was on trial in his court on aggravated sexual assault of a child charges.

"It was pandemonium," Judge Larry Gist, whose office is across the street from the main courthouse building, said as he described how law enforcement flooded the scene as soon as the shots rang out.

Ricky Gandy said he went to the window of his office at LJA Engineering, which overlooks the parking lot next to the Beaumont Police department, after hearing a "pop, pop, pop."

He saw police shooting at a pickup truck as it came out of the parking lot, but the driver "never really got in a hurry."

"Once it started, it was kind of like the Fourth of July," Gandy added. "Several shots, I imagine, I'm guessing at least 30 shots all together."