FALCON HEIGHTS, Minn. (WCCO) – A quick look at Linda Paulsen's works in the crop art exhibit at the Minnesota State Fair is all it takes to see that she has a sharp eye for color, texture and detail.

Ask Paulsen about her art, and the 71-year-old will tell you that she "sees seeds" in the world around her, from details on people's faces to patterns in dish towels.

"I have more ideas than I'll ever have time to make," Paulsen said.

If she's lucky, the artist has enough free time to create about three works a year from her home near Hackensack.

Each piece takes weeks of meticulous labor. First she conceptualizes an image, then sketches an outline and finally glues hundreds of seeds on a surface using toothpicks, spoons and tweezers.

Once finished, a piece of hers has a high chance of ending up in the competition at the Minnesota State Fair. She's submitted work for nearly 46 years and won a hefty share of blue ribbons over the decades.

"I've gotten best of the show 10 times," she said. "I've gotten the next highest five times."

To be in the State Fair competition, the work has to have seeds grown in Minnesota. That's what makes it crop art, instead of just seed art.

This year, Paulsen's submitted work depicted an idyllic country house, surrounded by bushes and trees. The piece featured more than 17 seeds of various shapes and colors, and it won first place in the advanced dried plant parts section. 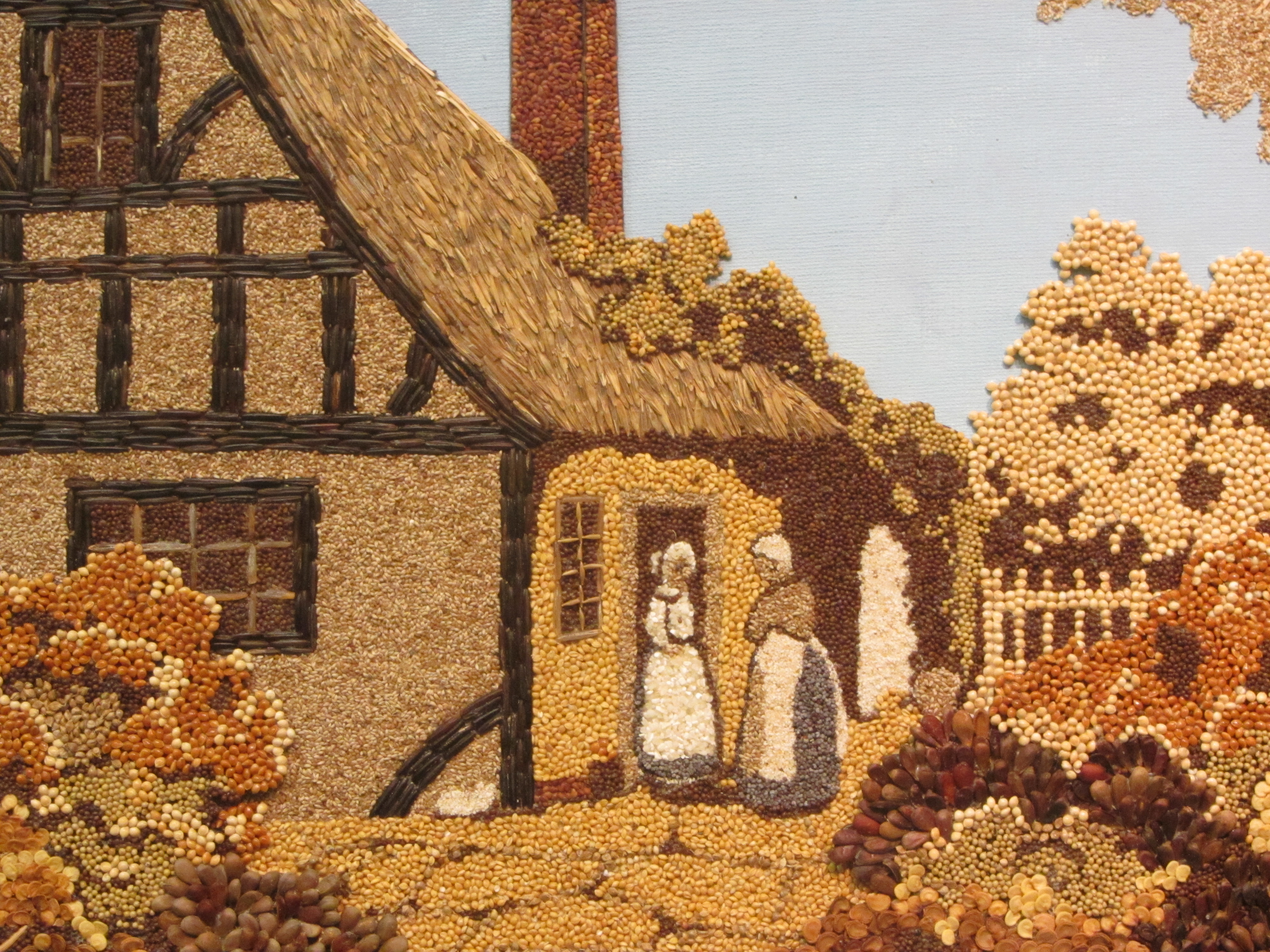 A blue ribbon means Paulsen gets to pocket $30, prize money that meant a lot more when competitions first started in the 1960s.

Yet, the fair isn't really about ribbons and prize money for Paulsen. It's about meeting people and sharing her craft.

Every afternoon at the fair, she demonstrates her process and talks with fairgoers in the Agriculture-Horticulture building. Behind her workstation, on a wall separate from the competition, are a few of her masterpieces from over the years.

One is a striking portrait of Lucille Ball, her hair made of curly dry pine needles. Another is a lion with a brilliant mane.

Her mother, Lillian Colton, saw the very first crop art display from the fair 50 years ago. The next year, she entered the competition. She went on to be a crop art picasso, nicknamed "The Seed Queen."

By the time the fair's third crop art competition came around, Colton had gotten her daughter to submit a piece. The rest is history. Paulsen has only missed a few years in between then and now due to issues with her back.

Since its inception 50 years ago, crop art has taken off at the fair. It's something now synonymous with the Great Minnesota's Get-Together. 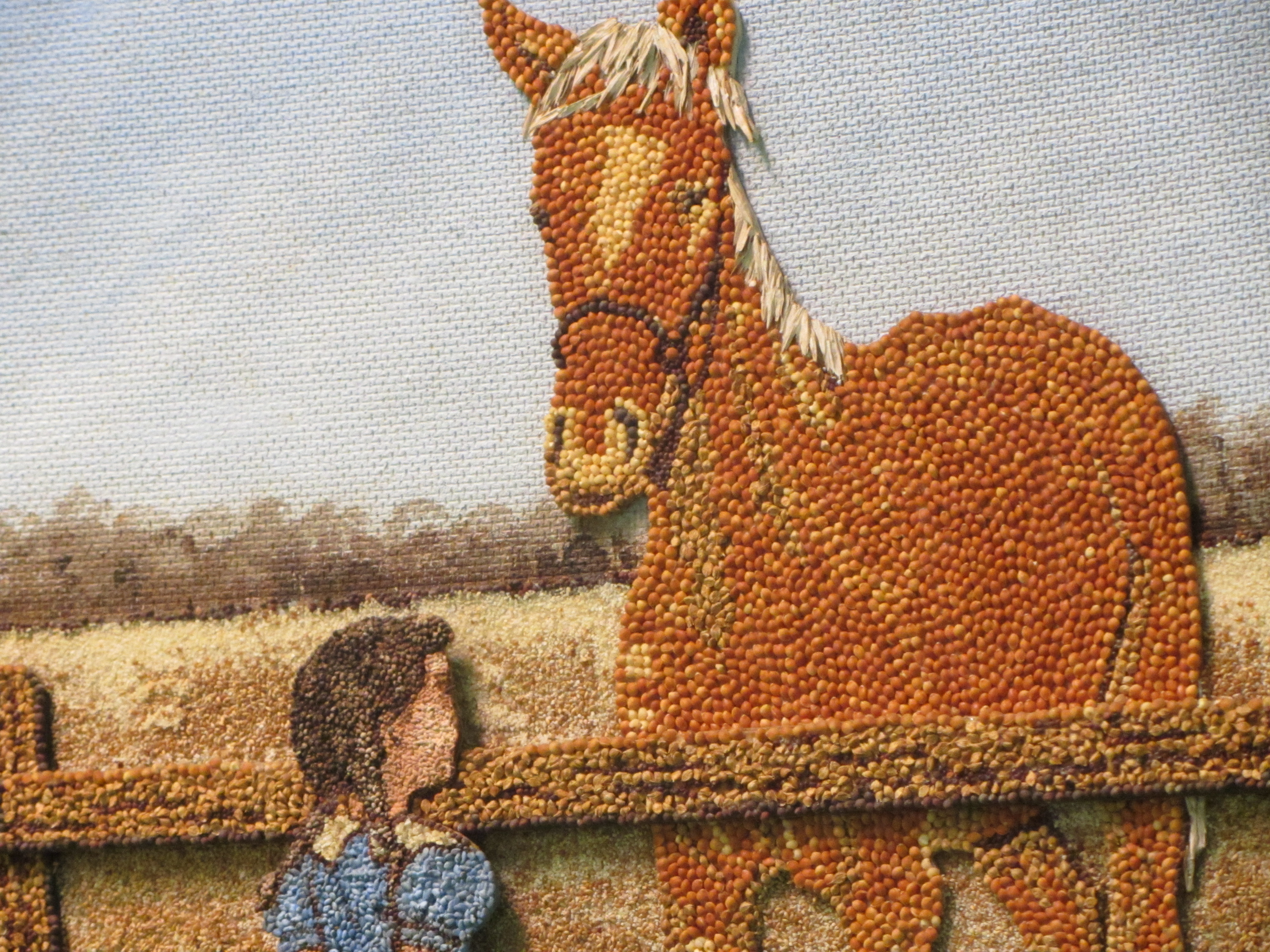 Ron Kelsey, the superintendent of the seed section in the Agriculture-Horticulture building, said about 150 pieces of art were part of this year's competition -- that's 40 more than last year.

Some of this year's pieces even grabbed headlines.

One caused a stir because it showed an image of Bill Cosby made with rapeseed. It was taken down after a day, in part, because rapeseed in the United States is just called canola.

Another piece was used in a marriage proposal. A man commissioned an image of a diamond ring, with text saying: "Hey Betsy, here's a ring you don't have to wear. Will ya?"

The man brought his girlfriend to the exhibit on the first day of the fair. She said yes.

The consistent quality of the work keeps fairgoers coming back year after year, and Kelsey said that other states are seriously considering starting up their own crop art competitions.

Still, with half a century of experience in Minnesota and artists like Paulsen spreading their knowledge, the crop art here is hard to hold a candle to.

"When you leave Minnesota, you don't say, 'I think I saw crop art,'" Kelsey said. "You're impressed with what you saw. It's the greatest state fair in the country, and, of course, it's got the greatest seed art."

On Wednesday morning, there'll be 50 year anniversary celebration in the Agriculture-Horticulture building. Paulsen and other artists will speak, and Kelsey said there'll be cake and "edible seeds."