MINNEAPOLIS (WCCO) -- Alex Rodriguez, future majority owner of the Minnesota Timberwolves, said on Instagram Tuesday he plans to keep the team in its home state.

In the comments of a video showing Rodriguez with his business partner Marc Lore, who is also part of the purchase of the Timberwolves and Minnesota Lynx, someone demanded the former New York Yankees star keep the Wolves in their home state. 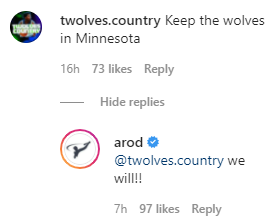 "We will!" Rodriguez replied.

Last month, the Wolves announced current owner Glen Taylor reached an agreement with Lore and Rodriguez to begin the "transition of ownership" of Minnesota's two professional basketball teams. Taylor will remain majority owner for two years before Rodriguez and Lore take over.

Minority owner Meyer Orbach sued Taylor after the deal was announced, alleging the sale violates the franchise partnership agreement and accusing Taylor of making misleading public statements about the contractual requirement that Lore and Rodriguez keep the Timberwolves in Minnesota.

"I stand by my prior statements and commitment to keeping the Timberwolves and Lynx in Minnesota," Taylor said in response to the lawsuit.