It's a little difficult to recommend today's selection if you aren't already familiar with the films of South Korean master Hong Sang-soo. Like many auteurists' pet faves (including, but not limited to, Yasujiro Ozu), he tends to allow elements, actors, themes and suppositions to flow freely between his films, and the result is a body of work that's greater than the sum of its parts.

But it's also that characteristic that in many ways makes Nobody's Daughter Haewon, his fourteenth film (the fifteenth, Our Sunhi, has already played a number of festivals as well), an oddly perfect introduction to his works. The title character is often drifting herself between multiple states of presence and non-presence, freshly approximating the attitudes of a director whose seemingly casual characters help him mask a high degree of self-reflexivity.

Haewon's tale is told through three diary entries. The first of them recounts the day her mother left South Korea to live with Haewon's brother in Canada. That afternoon, Haewon (Jung Eun-chae) dreams she meets French entertainer Jane Birkin. After giving Haewon an autograph, Birkin tells her how much she resembles her own daughter Charlotte Gainsbourg. The dream segues into the long, meandering goodbye shared between Haewon and her waking-life mother, an extended encounter that is not significantly less dramatic than the dream meeting. Haewon is theatrical, awkward, capricious, emotional, and loveless. She is everything at once, and usually seems to be the wrong thing at the right time.

The remainder of the film susses out the nature of her relationship with Lee Seong-joon (frequent Hong player Lee Sun-kyun), one of Haewon's college professors who also has worked as a film director. Though he's married, the two have been lovers in the past and seem on the verge of rekindling their affair in the near future. But the film's elliptical nature makes it difficult to tell who feels what for the other, and whether it's all not just another fleeting daydream like that chance encounter with Birkin.

Hong doesn't come off as the most assertive director in some ways, but there's a playfulness to how he double underlines the movie's internal repetitions and object recalls (such as a discarded cigarette) intended to call into question what's real and what's fanciful. Real life is not a puzzle to be solved, but one can often feel like they're missing some solitary vital clue that would allow them a happily ever after, and not a grim sense of déjà vu like Haewon and Lee no doubt feel on that Namhan Fortress park bench. Not everyone has a taste for theme and variations, but Nobody's Daughter Haewon works as an exemplary demonstration of the form, both in isolation and within Hong's greater canon.

Nobody's Daughter Haewon plays at St. Anthony Main Theater tonight at 9:20 p.m. It is the only screening scheduled for the film. 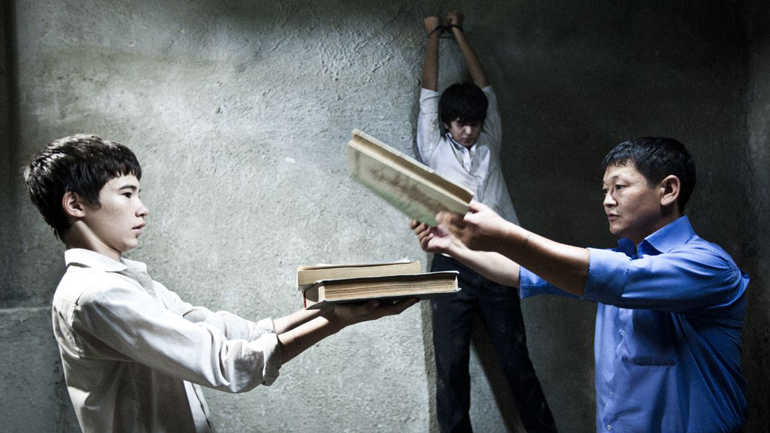 Jouir de la Vie (Cole Seidl; U.S./France) Certainly this counts as one of the most eyebrow-raising synopses of this year's fest: "A young painter begins suffering from a bizarre ailment: He dies every time he has sex. He sets off to France in hopes discovering why." I guess it's not for nothing that the French euphemism for "orgasm" translates to "little death." (7 p.m.)

Harmony Lessons (Emir Baigazin; Kazakhstan) This slow-burn from Kazakhstan has earned strong notices at Tribeca and Berlin, and depicts in dog-eat-dog fashion the long debasement of good student Aslan and his turn of the tables. (5 p.m.)

The Rocket (Kim Mordaunt; Australia) Submitted but not nominated for this year's best foreign film Oscar, this uplifting slice of Australian magical realism has been charming audiences everywhere. (It won the audience award at Tribeca.) The Rocket tells the story of a boy who decides to end his string of bad luck by entering in an annual rocket-building competition. (4:45 p.m.)