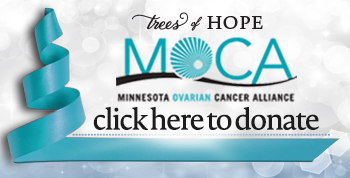 MINNEAPOLIS (WCCO) -- There are no early detection tests for ovarian cancer, and 56 percent of women diagnosed with the disease die within five years.

That's why the Minnesota Ovarian Cancer Alliance (MOCA) spends most of their budget on funding research. WCCO's Susan-Elizabeth Littlefield took a look inside the Mayo Clinic to see where some of that money goes.

There are a lot of important things going on at this international hub for health. Inside one lab, Dr. Matthew Block is in charge of one of them. He works to "either reduce the curable rate or improve the cure rate or delay occupancies."

Block admitted it can be a bit jumbled to explain, but he's on a mission to save people from ovarian cancer. It's a cause that's not just professional -- it's personal. He and his family lost a close friend named Jayne.

"We struggled with her as she dealt with ovarian cancer for four years, and unfortunately she passed away," Block said.

With the disease's 85 percent mortality rate, he's lost a number of patients as well.

"Working with my patients fuels the passion," he said. "We've got to learn to do things better than we're doing them currently."

That's why Block is managing a study at the Mayo.

Most women who develop ovarian cancer have a bout and go into remission, but then it recurs. Block is trying to come up with a vaccine for survivors using a woman's own cells, so that their cancer won't come back.

"In ovarian cancer, we have seen that we can generate immune responses that recognize the cancer like they would recognize a virus," Block said.

The level of funding by the federal government is often not enough to accomplish these types of trials, so groups like MOCA have stood in the gap. About $100,000 came from MOCA, through donations to the teal-themed small non-profit.

Block said his gratitude to the group isn't just about money.

"While I do my best to try and explain things to the patients so they understand what's going on -- what to expect, what our plans are as treatments -- it's often nice to have someone outside the medical field whom she can relate to, and MOCA's provided that for many through their support," Block said.

To make a donation to MOCA, click here. More information about ovarian cancer can be found here.