The former Brooklyn Center police officer is charged with manslaughter in the death of Daunte Wright during a traffic stop last April. She says she meant to use her Taser, not her gun.

There was a lot of technical testimony about processing evidence at the scene, but the highlight was each side battling to convince the jury of either the differences or the similarities between Potter's Taser and firearm.

Sam McGinnis, an agent with the Minnesota Bureau of Criminal Apprehension, turned on a Taser on the witness stand to show the jury how the light and laser get activated. He also testified to the differences between a Taser and a Glock pistol, which Potter says she mistook for each other when she shot Wright.

"The Taser's yellow, the firearm is black. The Taser has a stocky body to it compared to the Glock handgun. The grip of the Taser is shorter and wider than the Glock," McGinnis said.

The prosecution pointed out the weight difference in the weapons. Potter's lawyers pointed out the similarities, including the trigger mechanisms and general shape of both weapons.

The judge would not let the jurors hold the Taser in the courtroom. She said they can have access to Potter's Taser and handgun in the deliberation room.

Other BCA employees testified Monday, too. In Agent Brent Peterson's review of video from the case, he noted that Potter adjusted her firearm holster as she approached Wright's vehicle.

In the morning session, Wright's cause of death was established: a gunshot wound to the chest. The jury heard testimony regarding Wright's autopsy.

The man who performed it, Hennepin County Assistant Medical Examiner Dr. Lorren Jackson, detailed for the jury the damage that Potter's bullet did to his body.

"The combined volume from both sides of the chest, so around the right and left lungs and the heart, were over 3 liters of blood," Jackson said.

Autopsy photos weren't shown publicly out of respect to Wright's family. The manner of death was found to be homicide, which is a medical term, not a criminal one. It means death occurred at the hands of another.

In cross-examination, Potter's attorney established with Jackson that Wright could have stayed conscious for up to a minute after losing that much blood and driven away. He also asked about the THC found in Wright's system during toxicology.

"It's on the high end of numbers that I see," Jackson said.

The doctor testified the THC was insignificant to Wright's cause of death.

The state also filed two motions Monday, one of which would prevent police officers from offering opinions about whether they thought Potter could use deadly force. Her sergeant testified last week that state law allowed her to use deadly force.

The other motion would allow prosecutors to present witnesses to talk about Potter's role as union president in Brooklyn Center. They believe her elevated status gives her a level of respect and admiration that make fellow union police officers bias in her favor. Those motions will be settled Tuesday morning.

The Minnesota Public Employees Association did not take kindly to that motion suggesting union membership caused bias. They denounced it, noting that the Hennepin County Attorney's Office is unionized.

HOW TO WATCH: The trial resumes Tuesday morning at 9 a.m. with live coverage on CBSN Minnesota. You can also follow our social channels for more coverage: Facebook and Twitter. WCCO's David Schuman is also providing updates on Twitter.

Below are updates of the day's events as they happened.

UPDATE (3:50 p.m.): Judge Regina Chu adjourns court early for the day, but assures the jury that the trial is still on schedule. It will resume 9 a.m. Tuesday, when Chu says they will discuss two motions filed by the state Monday.

One involves the state's desire to question Brooklyn Center police officers about their union membership in order to determine any possible bias, since Potter was president of the department's union.

The other motion seeks to limit the opinions of witnesses who aren't experts.

UPDATE (3:30 p.m.): State's final witness of the day is Travis Melland, forensic scientist with the Minnesota BCA who specializes in firearms. He is asked about the mechanics of what happens when a gun is fired.

Melland testifies that he examined Potter's service firearm, the single bullet she fired at Wright, and the bullet's corresponding discharged casing. He is also asked about her weapon's "trigger pull," which is the amount of force needed to successfully discharge the weapon. He says after testing her firearm, he determined the necessary force to pull the trigger fell within the normal range of 3lbs-9lbs of force.

UPDATE (2:30 p.m.): During cross-examination, Potter's attorney said the Taser was a new model and Potter was the only one in the department who had it. The defense also pointed out that the handles and tops are both black.

BCA agent's corrected the defense's lawyer a couple times for saying gun when he means Taser, lawyer says there's confusion between the two.

Defense asks BCA agent if he ever contacted Taser manufacture to ask why they shaped it like a gun. He answers no. 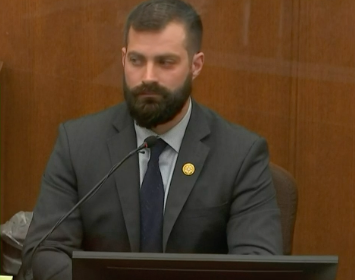 State is asking him questions about Taser usage and protocol. At one point, he showed how a Taser, when activated, will turn a light on and have laser indicators to help officers aim the Taser shot.

McGinnis talks about Potter's duty belt, with the gun holstered on the dominant right side, Taser on the non-dominant left. Both are drawn after snapping back a security/safety mechanism on the holster.

When asked by the state if the firearm weighs more than twice the amount as the Taser, McGinnis agreed. He also described the many differences between the two pieces of equipment. 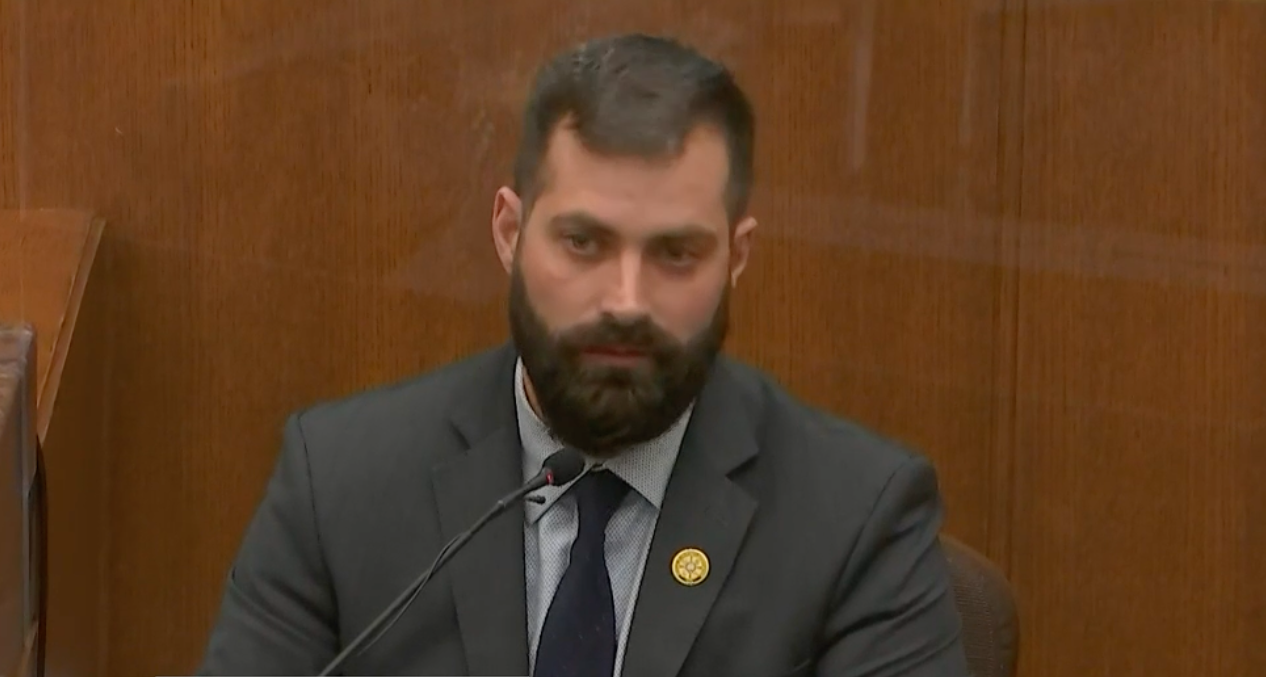 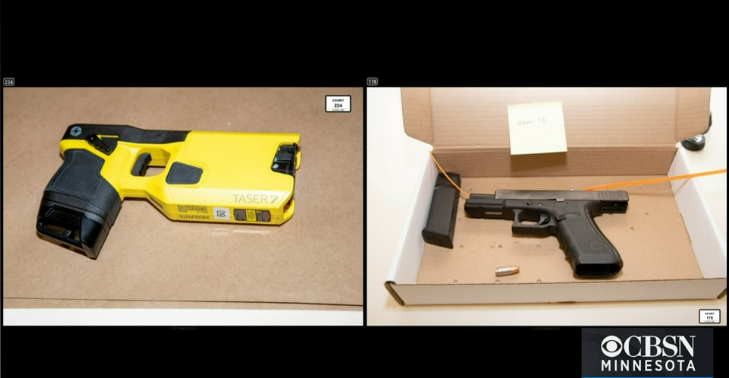 UPDATE (12:30 p.m.): Counsel returned to court after a 15-minute break and immediately entered a sidebar.

After the sidebar, Judge Regina Chu noted an objection from the defense was sustained.

Petersen noted a "manipulation" of Potter's holster. He said when he wore a similar holster on patrol, he would sometimes unlatch the first level of protection in order to make drawing the firearm easier.

The state asked several questions about the position of Officer Anthony Luckey, who attempted to handcuff Daunte Wright during the traffic stop. The defense objected to the questioning, and court entered another sidebar.

UPDATE (11:20 a.m.): The state's next witness is BCA agent Brent Peterson. He is testifying about his review of relevant body camera video in the case.

Prosecution indicates they intend to show a still image and the defense objects. After a sidebar, Judge Regina Chu overrules the defense's objection.

Prosecution calls for another sidebar. Court goes into short 15-minute break after a shorter segment of testimony.

MOTIONS (11 a.m.): The state has filed two important motions in the trial. The first is to strike testimony given last week that Kim Potter's use of force was justified "by statute." The motion says that testimony concerning matters of law shouldn't be given by non-experts, like police officers.

The second motion is to allow for questioning about officers' union membership to establish their possible bias in favor of Potter.

UPDATE (10:01 a.m.): State calls its next witness to the stand, Melissa Loren, a forensic scientist with the Minnesota Bureau of Criminal Apprehension.

Loren leads a team of forensic scientists who process crime scenes. She has been an expert witness in court before.

Loren is describing processing the evidence at the scene, including the discharged bullet casing inside Wright's vehicle.

The state is also questioning Loren about the firearms recovered on the scene from Kim Potter and Sgt. Johnson.

When asked about the THC levels in Wright's body, Jackson said it's tough to say whether Wright was a regular or frequent user of marijuana. He said the THC level was higher than the usual amounts he sees.

After short cross-examination, state comes up for redirect. On redirect, the prosecution is asking Jackson about what happens physiologically when someone is shot in the heart and loses a significant amount of blood. Follows the defense asking about whether Wright could have been conscious and driven off after being shot.

Defense comes up quickly to clarify that they were not asking about THC levels contributing to Wright's death. Jackson agrees.

Jackson is excused from the stand.

UPDATE (9 a.m.): The prosecution calls Dr. Jackson to the stand. He's been the assistant medical examiner for 12 years.

Jackson specializes in determining cause and manner of death, particularly in "unusual, unexpected or violent" deaths. He went to the scene of the incident in Brooklyn Center as part of his investigation. He performed an autopsy the day after the incident, on April 12.

Several pictures are being shown in court of Daunte Wright's body at the scene, as well as during the autopsy the next day. The entrance and exit wounds from the gunshot are on opposite sides of his chest.

These pictures are not being livestreamed out of respect for Wright's family.

In addition to the gunshot wound, Wright also had injuries to his face and body that are related to the crash and him being taken out of the vehicle. Jackson said they are mostly superficial and not significant factors in his death.

Jackson described the basic path of the bullet with a graphic being shown in court and livestreamed. Wright's lungs were slightly damaged, but Jackson said that the heart suffered the most damage -- and that there was a lot of internal blood loss as a result.

Jackson said, in his expert opinion, that the injury was not survivable and that the particular injury is fatal enough to cause death in seconds to minutes. He said if blood supply is cut to the brain, consciousness would be lost in seconds.

In a blood test, Jackson said that marijuana cannabinoids were discovered, but wasn't significant in Wright's cause of death. Jackson said the examination found no other health issues.

Jackson determined that Wright died by homicide due to examination of the wound and information that he had been shot by another individual. Cause of death: gunshot wound of the chest.

The footage showed Potter distraught after the shooting, she even talked about killing herself. Potter's supervisor, Mychal Johnson, made sure Potter didn't have a loaded gun, after making those comments.

Johnson told defense attorneys he could have been hurt or killed during the struggle with Wright, and Potter had the right to use deadly force.

Last week's testimony also featured emotional testimony from Wright's mother and the woman who was in the car with him when he was shot.