MINNEAPOLIS (WCCO) – The chair of the Republican Party of Minnesota appeared on WCCO Sunday Morning, days after the party had to apologize for an anti-Muslim Facebook post attacking Congressman Keith Ellison.

The offensive post featured racist, off-color comments and an image of Ellison, who is Muslim and black, and was posted on the party's official 7th Congressional District Facebook page. The Facebook post was up for several hours Monday night before it was deleted. The party responsible for the post was not identified, but was asked to resign immediately. 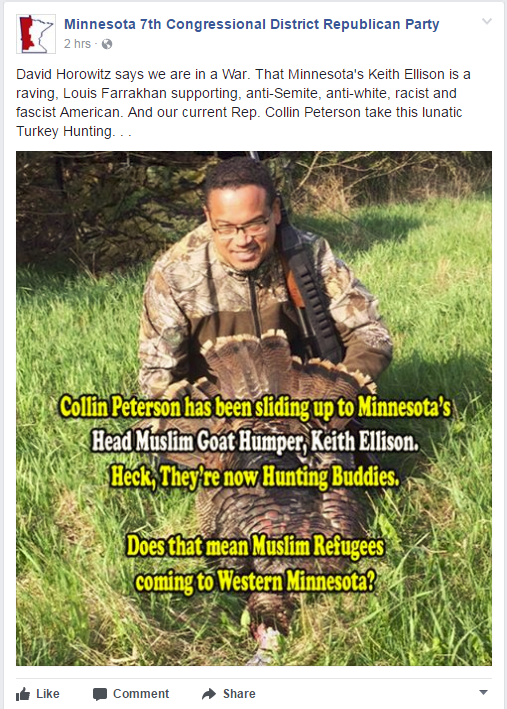 The Facebook post showed Minnesota Congressman Keith Ellison posing with a shotgun and a turkey on a hunting trip with fellow Democratic Congressman Collin Peterson. It called Ellison the "Head Muslim Goat Humper," and slammed Peterson for "sliding up" to him.

The message drew a swift rebuke from the new Minnesota Republican Party Chair Jennifer Carnahan, who called the image "repugnant" and demanded the immediate resignation of the Republican official who posted it.

Carnahan said Sunday the incident was unfortunate, but their response was strong and immediate.

"We don't condone hate speech and repugnant speech like that. It's not reflective of our values as a party or reflective of the values of the 7th Congressional District," Carnahan said. "By getting out and addressing it in a timely manner and asking for the immediate resignation, I think it shows the direction and importance of where our party is headed."

Carnahan also discussed President Donald Trump's victory in the House of Representatives with the American Health Care Act and potential health care reform in Minnesota, and the attempt to maintain Republican power in the Minnesota House and Senate.