MINNEAPOLIS (WCCO) -- The Minnesota Department of Public Safety says a tanker truck driver is in custody after speeding through marchers protesting the death of George Floyd on the Interstate 35W Bridge in Minneapolis Sunday.

WATCH: Video Shows How Truck Progressed Through Crowd On I-35W

At 10 p.m., WCCO confirmed with the Hennepin County Sheriff's Office that the suspect was Bogdan Vechirko, of Otsego. He is currently being held custody on probable cause assault, although it is still yet unclear whether the event was intentional or accidental.

DPS Commissioner John Harrington says it appears that no protesters on the southbound lanes of the interstate were seriously hurt. He estimates that 5,000 to 6,000 people were on the bridge at the time the truck sped through. Harrington says the truck was already on the interstate before the incident, even though it had closed about 40 minutes earlier at 5 p.m. and barriers were in place specifically for the marchers.

"It was one of the most dangerous things I've ever seen," Harrington said.

The driver, who was pulled out of the truck and attacked by protesters, was treated for non-life threatening injuries at Hennepin Healthcare, and is now in the Hennepin County Jail. In several videos of the incident, protesters can be heard and seen trying to stop the attack, and several laid on him to protect him.

The Hennepin County Sheriff's Office said that no one was called out for a water rescue in the incident.

The truck had a Kenan Advantage Group logo on it. The Ohio-based company gave this statement late Sunday evening, which read in part, "Our hearts go out to all those who are grieving the events of this past week. We have been informed of an incident involving one of our independent contractors in Minneapolis, MN during recent protests. Our first and foremost concern is for the safety and security of the public, our employees and our customers."

Police arrived soon after, and began to use chemical spray on protesters, including those who were trying to help the man to the squad car. Gov. Tim Walz later announced at a press conference about 90 minutes later that the police quickly moved onto the bridge and cleared the crowds due to the threat of a possible gas or chemical leak from the tanker.

The police response led to pandemonium on the bridge, with thousands quickly scattering away to the nearest off-ramp.

The DPS announced about three hours after the incident that the Minnesota State Patrol and the Minnesota Bureau of Criminal Apprehension are jointly investigating this as a criminal matter.

Those Minneapolis marchers were part of a "No Bail" march, which began at the U.S. Bank Stadium. At about 4 p.m., the group started to march through the streets of downtown Minneapolis. Their march moved from the stadium over to Hennepin Avenue Bridge, then over to Interstate 35W by about 5:30 p.m., where thousands took a knee and a moment of silence -- just a couple minutes before the tanker arrived.

The incident happened nearly 13 years after 13 people died and 143 were injured when the original Interstate 35W Bridge collapsed.

Meanwhile, a Justice for George Floyd march began with a rally at the Minnesota State Capitol in St. Paul. Midway throughout the afternoon, the march started moving and ultimately made their way onto Interstate 94, where they started marching west. 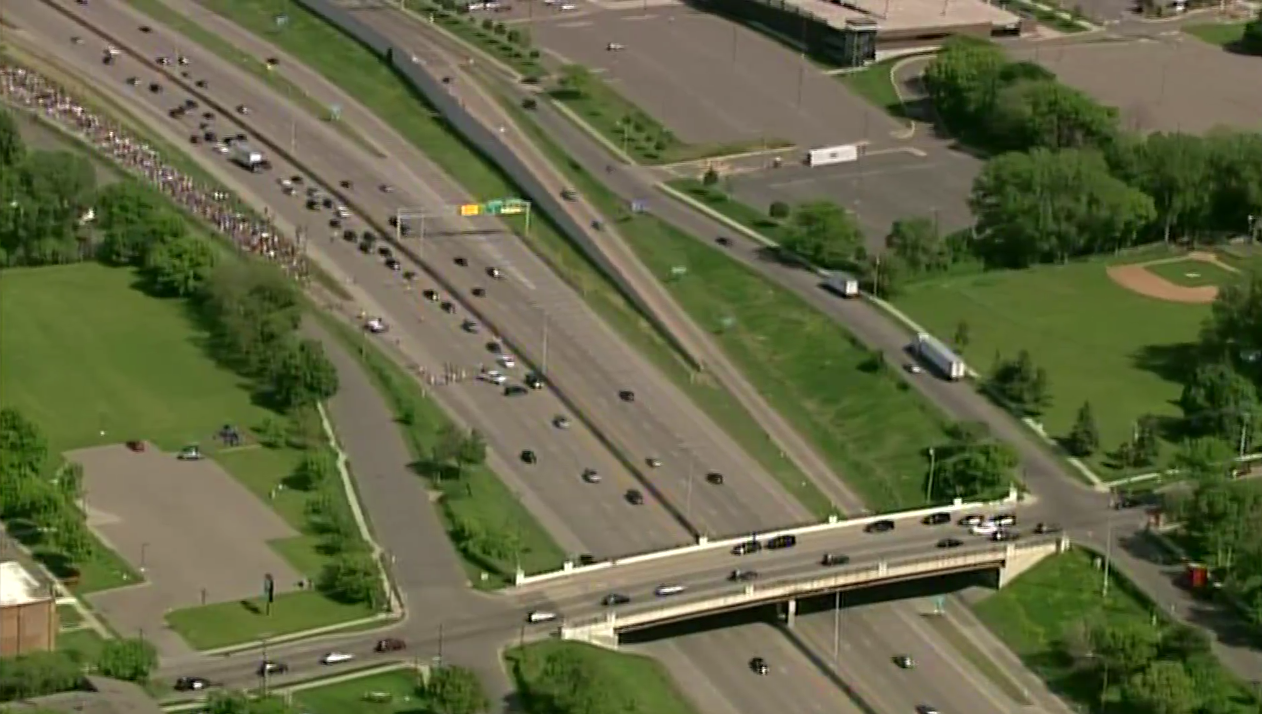 WCCO's David Schuman says that, in relation to the concerns about protests flaring up the spread of COVID-19 in the state and across the country, he observed at least three-quarters of protesters wearing face masks.

Gov. Tim Walz, on Sunday, extended the curfew order, which again goes into effect at 8 p.m. in both cities, along with many other suburbs in the surrounding area. Also, Metro Transit said they were going to continue suspension of all service on buses, LRT and commuter rail through at least Monday, June 1. And many Minneapolis-area highways will once again close through 6 a.m. Monday.