MINNEAPOLIS (WCCO) -- What a difference five years makes. In 2010, December 11th brought one of the biggest snowfalls in recent memory to the Twin Cities, one that ended up felling the roof of the mighty Metrodome.

That storm ended up dropping 17 inches of snow, which brought the season's overall total up to that point to 34 inches. In contrast, the National Weather Service says this year has seen only just over 5 inches of snow.

Below are some of the reports and photos from WCCO's reporting of the event:

Heavy snow and strong winds have created blizzard conditions in parts of South Dakota, Iowa and Minnesota as a winter storm barrels through the Upper Midwest.

Strong north to northwest winds of 25 to 35 miles per hour, with gusts up to 50 miles per hour, have near whiteout conditions on many roads in eastern South Dakota, northwest Iowa and southwest Minnesota, the weather service said.

In Minnesota, transportation officials pulled plows off roads in open areas and told drivers to stay home because of worsening weather in the southern part of the state. 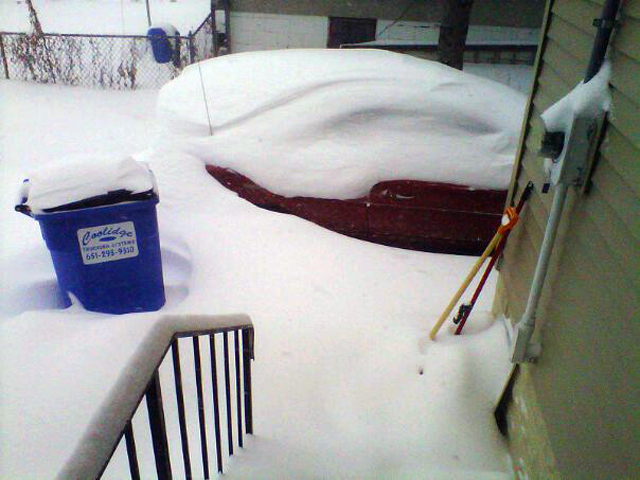 Weather Blog: The Cold After The Storm

Northerly winds on the back side of the low are pulling in cold air from Canada. Windy and cold for your Sunday, then less wind but still cold on Monday and Tuesday.

The storm total at MSP airport is 17.1 inches, which also marks the official Twin Cities total for this storm. That makes it the fifth greatest Twin Cities snowstorm total since official records began in 1891.

The weight of all the snow that fell Saturday has caused the roof of the Metrodome in downtown Minneapolis to partially collapse.

At least three of the panels on the roof are down.

Because of the collapse, the Minnesota Vikings and New York Giants will play at 6:20 p.m. Monday at Ford Field in Detroit.