MIAMI (CBSMiami) – Road rage shootings are on the rise across South Florida and many of them are deadly.

While it's not known yet whether Brianna Sutherland, who remains on life support after being shot multiple times while driving on I-95 early Monday morning is a victim of road rage, the incident highlights the increasing number of shootings on South Florida highways.

"If someone gets hit or a car gets hit that person might lose control of their own car.  That could hurt some other people and so the consequences of this are far reaching," says Alex Piquero, who's the Chair of the University of Miami's Department of Sociology and Criminology.

The victim in this case was traveling northbound when another driver opened fire and took off.  Miami Dade Police are leading the investigation and tell us, the shooter remains on the loose.  We asked them how they plan to stop the highway shootings from happening so frequently?  In response, police tell us working with the community is crucial.  They say, "We need to continue to work with the community to curtail these crimes.  The community is our eyes and ears."

This shooting is the latest in more than a dozen shootings on South Florida highways since last June.  Unfortunately, many are never solved.

"When people are traveling 75mph on the highway and they're taking a couple of shots in the middle of the night, there is not a lot of traffic.  There aren't a lot of bystanders.  It's really hard to see license plates in the thick of nighttime with not a lot of lighting, with not a lot of cameras," explains Piquero.

We asked police if they are working with other law enforcement agencies to prevent the shootings from happening.  They tell us, "Several state agencies patrol our expressways.  We're always in collaboration to ensure our communities are safe."  As for why these shootings are happening, police say the vast majority are targeted or attributed to road rage.

While Miami-Dade police are leading this investigation, they don't patrol our highways.  FHP is the main agency tasked with that.  We've asked FHP all of the same questions, but we haven't heard back yet.

Here are a couple of maps that show how far-reaching these shootings have been in Miami-Dade and Broward Counties in recent months.

Each one of the dots show a different shooting on a highway and these are just the ones that have been reported. 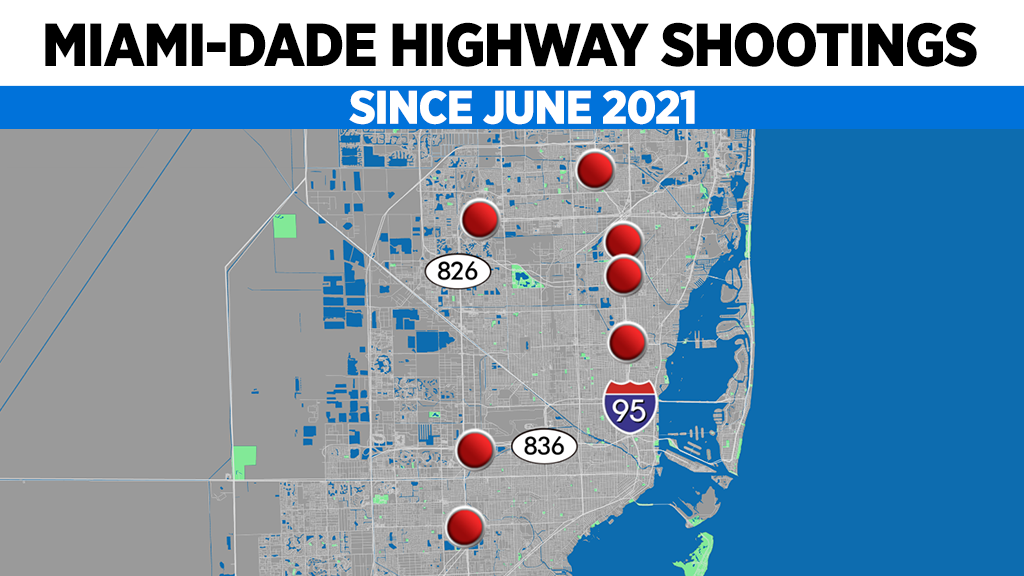 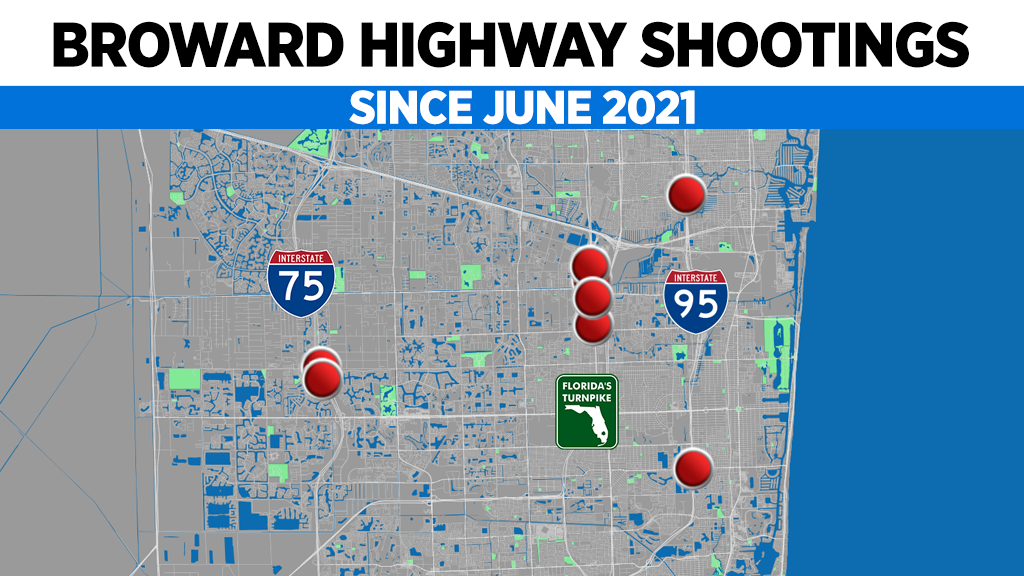 Investigators have called most of the shootings road rage incidents.

According to Gun Violence Archive's database, Everytown Research & Policy determined that the number of road rage injuries and deaths have increased yearly since 2018.  Over the last year, an average of 42 people per month have been shot and killed or wounded in road rage shootings, across the country.

According to the National Highway Traffic Safety Administration:

Everytown Research & Policy states it's not known what's driving the increase in road rage shootings, but the COVID-19 pandemic brought increased stress into people's lives and exacerbated underlying ones. During the pandemic, there was also a record increase in gun sales and a national increase in shootings. This data strongly suggests that these changes have played out on streets and highways, too.