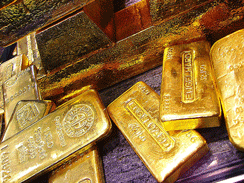 One of the more common questions I receive is, "Should I buy gold as a hedge against inflation?" Many, if not most, investors seem to think of the metal as a good way to protect themselves against unexpected price hikes. And they're dead wrong.

Gold can help offset some economic and geopolitical risks, but it's a poor hedge against inflation, as the following example illustrates.

The inflation rate for the period 1980-2001 was 3.9 percent. A gold investor who was unlucky enough to have bought at that $850 peak not only would have seen the investment fall by 65 percent in nominal terms by the spring of 2002, but also would have experienced a real loss in purchasing power of about 85 percent. Given this abysmal performance, gold cannot possibly be considered a good hedge against inflation.

The rapid rise in the price of gold in the 1970s was fueled by easy monetary policies, with negative real interest rates. When the era of loose money ended, the bubble burst. Easy money is also behind the surging gold prices since 2003. While I'm certainly not predicting that gold prices are set to collapse, it's possible. Just as a change in monetary policy led to a change in gold prices in 1980, a move by central bankers to raise interest rates could cause a repeat performance of that precipitous decline more than three decades ago.

Since that remains well within the realm of possibility, let's look at other investments considered by many to be good inflation hedges.

Investing in a broad basket of commodities futures provides some hedging benefits against the risk of inflation. That is apparent in the correlation of their returns to inflation. Since 1970, the monthly, quarterly, and semiannual correlations of the S&P GSCI (a broad-based commodity index) were 0.17, 0.36, and 0.41, respectively. Because these are lower than the correlations of short-term bonds (0.44, 0.50, and 0.55), we can see that short-term bonds hedge better than commodities, and commodities hedge better than gold. This shouldn't be surprising, because while commodities are a source of inflation, gold isn't. Thus, it shouldn't be surprising that as an inflation hedge, an investment in a broad-based commodity index is superior to an investment in gold.

We should also note that commodities' positive correlation to inflation and their high volatility (almost 25 percent per year) mean that a small allocation to these investments goes a long way in terms of providing an inflation hedge.

Many investors believe that stocks hedge inflation. Unfortunately, this is a myth. We can see that in the correlations. The monthly, quarterly, and semiannual correlations are all negative at -0.09, -0.10, and -0.07, respectively. Despite the data, the myth persists because stocks have outpaced inflation over the long term. However, this is because stocks are riskier, and thus provide an equity risk premium. Because there's risk, you can expect very long periods when stocks provide negative real returns.

A great example is the most recent 12-year period from 2000 through 2011, when the S&P 500 returned 0.6 percent, while inflation increased at a rate of 2.5 percent. As a second example, investors in Japan have seen significant negative real returns for over 20 years. Stocks do have high expected returns, but they're not good inflation hedges.

Just as commodities are a source of inflation, rents are major factor in the return to investments in real estate. In fact, they play a much larger role in the Consumer Price Index than do commodity prices.

This is the logic behind the idea that real estate is a good hedge against inflation. And the correlations are positive, though they're very low. The monthly, quarterly, and semiannual correlations to inflation since 1970 are only 0.01, 0.08, and 0.16, respectively. Thus, we can say that an investment in real estate investment trusts (REITs) does provide some inflation protection. However, you must remember that REITs are stocks (and have a risk premium) and can suffer large losses, just like stocks. Again, a recent example provides all the evidence we need. From 2007 through 2008 REITS provided a negative real return of 28.5 percent per year.

The only good inflation hedge

There's only one true hedge against the risk of unexpected inflation, and that's an investment in Treasury inflation-protected securities. TIPS have a much higher correlation to inflation than do nominal bonds, both short- and long-term.

For example, from their first issuance in April 1997 through December 2011, the quarterly correlation of TIPS to inflation was +0.21.

Consider the correlation of Treasuries:

For investors seeking to guard against inflation, this is compelling evidence that TIPS are a better hedge than short-term Treasuries. If you buy and hold TIPS to maturity, you're also guaranteed to earn at least the real rate of return at which you purchased them. (If there's cumulative deflation, the real rate will be higher as TIPS cannot mature below par.)

There are two other benefits of TIPS. The first is that TIPS are also negatively correlated with stocks. For April 1997-December 2011, the quarterly correlation of TIPS to the S&P 500 was -0.31. A 2004 study found that the standard deviation of an equal-weighted portfolio of stocks and bonds is about 13 percent lower when indexed bonds are used than when conventional bonds are used. And the risk-reduction more than doubles for more conservative portfolios.

The second is that because TIPS fully hedge inflation, you can extend their maturity and earn the term premium without taking inflation risk. This is an important point that many miss.

The bottom line is that there's really only one good hedge of inflation: TIPS. Investing in a broad commodities index may also offer a partial hedge, as might an investment in REITs, although a  much weaker one.

However, these are nowhere near as effective hedges as are TIPS. Finally, short-term bonds offer more protection against inflation than do longer-term bonds. But they, too, aren't very effective at hedging inflation risks. And you have to sacrifice the term premium to obtain that hedge.