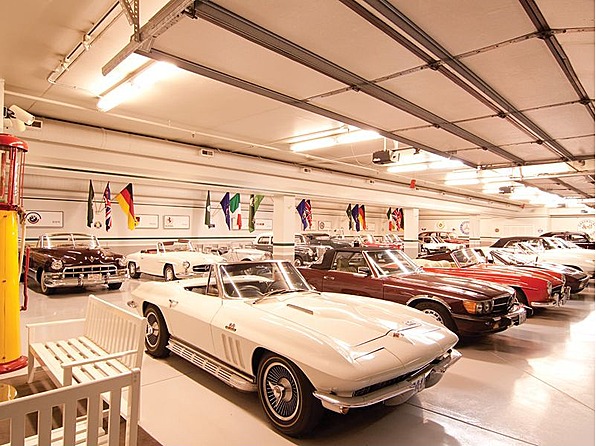 People buy homes for a variety of reasons -- they need more bedrooms, a nicer kitchen or a better neighborhood. But what if you bought a home solely based on its cool custom garage?

It seems like a bad idea, but if you're super wealthy and have an enormous car collection, it might be worth it. After all, if you have that kind of money, you could always remodel the entire house.

These car-crazed celebrities have custom garages any auto enthusiast would love to have. Some of these garages are nicer than entire homes currently for sale.

According to The Smoking Gun, Seinfeld's five-car garage took five years and much more than the original $500,000 the comedian originally budgeted for the project.

The custom car-park features white terrazzo floors, custom cabinetry and an industrial elevator. Everything in the garage is controlled by a touch screen.

Seinfeld also included a "bachelor pad" in his garage, making it the perfect place to get away and enjoy his expensive Porsche collection. The apartment is 844 square feet -- bigger than some studio apartments in NYC -- and features a kitchen, bathroom, pool table and flat screen TVs.

John Travolta's garage has parking for 15 cars, but there's something else that makes it special. The aviation enthusiast also uses the space to house his two planes -- a Gulfstream and a Boeing 707.

Travolta's home is located in the exclusive Jumbolair development of Ocala. It features a 1.4 mile airstrip, jet wash stations and plenty of space for big aircraft. In fact, before any homes were built on the site, it was used as an elephant sanctuary.

Jay Leno is a popular talk show host, but he's also known for his love of cars and motorcycles. Leno is a supporter of Sturgis, the historic motorcycle rally, and recently opened his Big Dog Garage for a tour which aired during the last Barrett-Jackson car auction.

The late-night comedian has a museum quality collection of cars and motorcycles housed in his 17,000 square-foot garage. The space itself is impressive: it features a full machine shop, a full stock of mechanic's tools and a large team of mechanics. It also has more than 200 classic cars.

Adam Carolla is known for his offbeat and often inappropriate sense of humor, but he's also a serious auto enthusiast. According to the folks at Autoblog, Carolla's garage is a classier, larger version of the one many people already have.

The space is large enough to house just under a dozen cars comfortably. The floors are polished concrete, there are industrial-style painted steel beams on the ceiling and the walls are covered in car memorabilia the comedian has collected over the years. The flat-screen TV makes it the perfect place to hang out and tinker with Carolla's fast toys.

According to Complex.com, Ralph Lauren's garage is something to be envied. In fact, the fashion mogul has so many cars he needs three garages to house them all. The garages are color- and brand-coded, ensuring Lauren can find whichever car he feels like driving that day.

The car collection housed within these three garages is arguably one of the most spectacular in the world. Each one of them has been meticulously maintained, and a few of them are estimated to cost anywhere from $30 million to $40 million a piece.