On Wednesday, Supervisor Janice Hahn asked Public Works to investigate, and the county is threatening to red tag the property if millions of dollars in repairs aren't made. Officials said the buildings are deteriorating and in disrepair and residents are worried.

From the air, CBSLA's Desmond Shaw captured footage of cracks on the 50-year-old high-rise buildings, which consist of 600 condo units, many with million dollar views, and 100 apartments.

Some residents in the building have also collected video of cracks on the roof, along with cracks and decay on the ground. In the underground garage, way below street level, concrete  on the ground that looks as if it's been pushed aside actually came from above.

Asked if they're concerned about the Champlain collapse in Florida happening here, at least one resident said it's been keeping them up at night.

"Absolutely, I've been worried ever since it happened. I haven't been able to sleep," Hirano said.

The cause of the Florida collapse still remains undetermined, though reports said that prior inspections showed cracking and failed waterproofing.

A 2018 construction report obtained by CBSLA's investigative reporter David Goldstein refers to the Marina City Club Towers as an aging property, with pictures of waterproofing cracking on the deck and leaking pipes below.

An April 2021 report on the Marina Del Rey condos said, "Nearly all of the waterproofing throughout the property, on the recreation decks and tennis courts, is failing in some way with water penetrating the structure," and adds that "...over time, this can cause significant damage to the building's structural integrity." 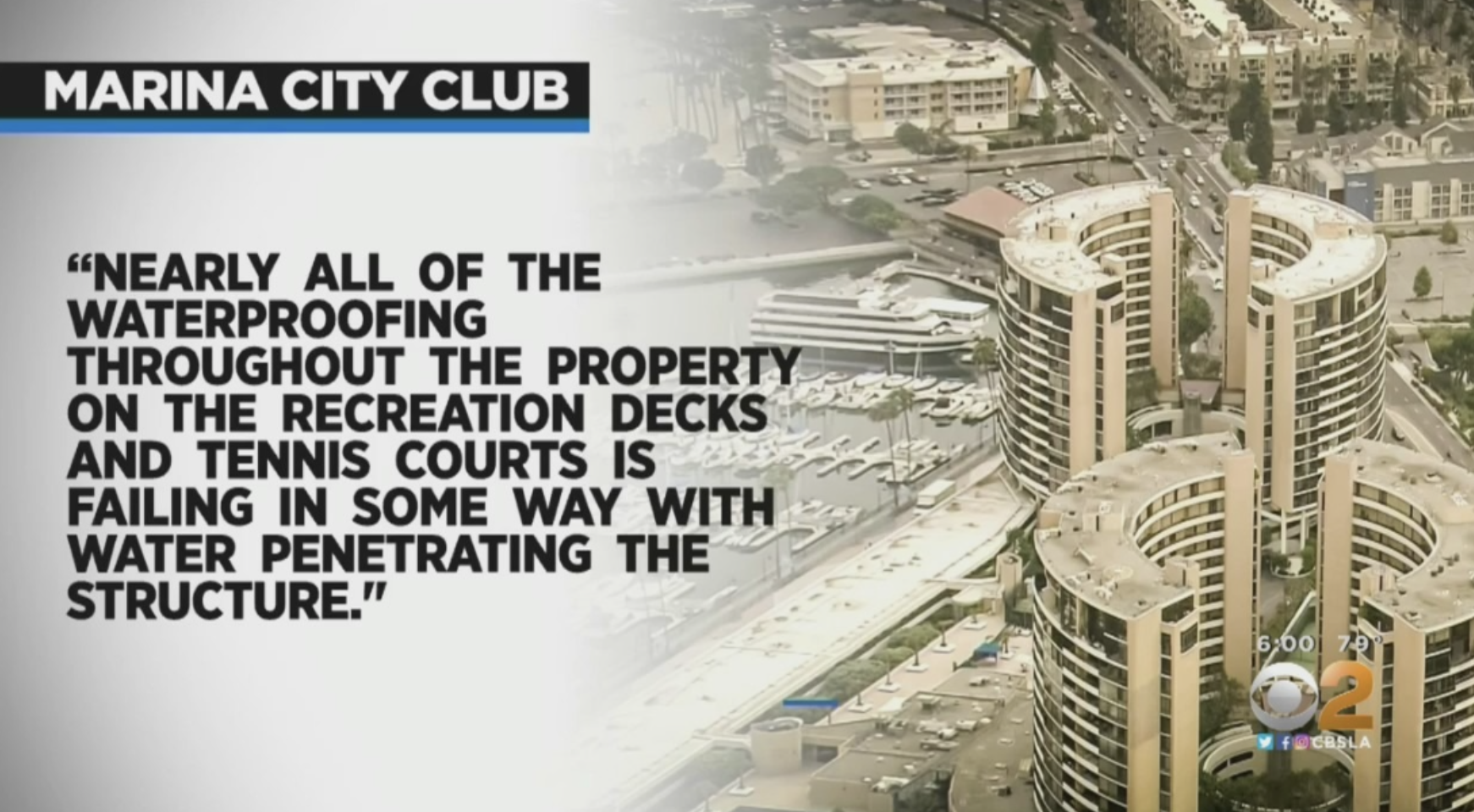 Club Tower resident Elena May said she's been hearing the sound of water dripping and leaks for years.

"The noises, the clinking noises like metal hitting each other has been happening for a long, long time," May said.

The Marina Del Rey property actually sits on leased land from LA County Beaches and Harbors. The department said its been working for years to get the leasee and condo owners to make millions of dollars of repairs, but there's a dispute over just who's going to pay for the construction.

In a memo to condo owners earlier this year, the building's association said the county "has threatened to red tag the development, which would mean the buildings are declared unsafe...unless we begin the process of repairing."

While County Beaches and Harbors wouldn't agree to an on-camera interview, they did release a statement that read, "For red tagging, there must be a structural analysis of the integrity of the three towers. To date, no thorough assessment has been conducted."

However, after the Florida collapse, the county got the leasee to begin that structural engineering study to determine if the buildings are safe.

"I just hope it's not too late. Look at the Champlain Towers, they waited too long," Hirano said.

There's no indication that the building is unsafe, which is what the engineering study will determine. Neither the company that leases the land or the condo association have yet responded to requests for comment.