Welcome to another hot and sticky July, at least in this corner of the world. Even if the weather is beautiful where you are, one can only spend so much time outside communing with Mother Nature. At a certain point, we all just want to go home, flop down on the couch and turn on the game. Except there's nothing to watch.

The second half of July is a sports dead zone, and this week is particularly harsh. The World Cup is over. Baseball is enjoying its all-star break, and will swing back into action this Friday. Football training camps start up in a little over a week. Basketball and hockey are still months away. This might just be the worst sports week of the year. What's a sports fan to do?

Well, I have some ideas:

With 162 games per team in a season, and 81 left, it's really hard to get excited about any one of them. It's even harder when there aren't any actual games involving real teams (or the Phillies). But the baseball All-Star Game actually matters, sort of. Thanks to Bud Selig, the winning league gets home field advantage in the World Series. So there's that to keep it interesting. It will also be Derek Jeter's farewell in a season-long tour of farewells. Okay, well, there's always beer. That should help.

I saw a game of lacrosse once... in college... by accident. I was walking across campus, heard some people yelling and went to see what was happening. A bunch of guys with shoulder pads, helmets and sticks were flinging around a blue ball. Every now and again one of them would body check someone else into next week. I think I enjoyed the game, once I figured out what was happening, but that was many years -- and many braincells -- ago. Who knew those guys would get out of college and start a league? The Northeast, home of Major League Lacrosse and where I went to school, is the cradle of the sport. And all of these teams, barring one, come from this part of the world. So if you live there too, it's worth a stroll through the upper cable channels to find a game.

Alright, now we're getting down to brass tacks. While NFL football can't come soon enough, the Arena League is going strong, with the Arizona Rattlers and Cleveland Gladiators leading their respective conferences. The action is contained in a smaller space, which the rules account for, but it's still very much football. Players score touchdowns, and players get hit... hard. And the teams are already in mid-season form. You may even get to see guys who will one day don an NFL uniform. Kurt Warner and many others have made the jump. 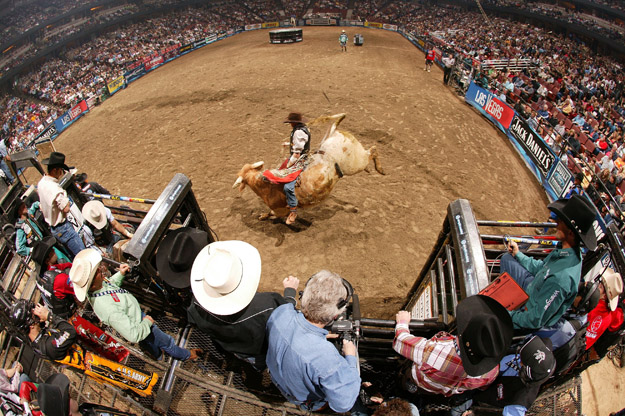 5. Take the Bull by the Horns

Any sport with the acronym PBR (Professional Bull Riders) is definitely doing something right. Beer -- and lots of it -- would be required to get most people on the back of an angry 1700-pound bull. But professional bull riders do it sober, and they do it well. Hence the "professional" part. The sport itself is fairly straightforward: ride the bull and earn a score. The score can vary based on control and style of the rider and the quality of the bull. Best score (or total) wins. Find this on TV and watch it. You'll quickly forget all those other sporting events that aren't on television.

6. Give in to Pro Wrestling

When everything else fails, there's always pro wrestling. Is it ridiculous? Yes. Is it staged? Yes. Is it completely and totally awesome? Yes. And it's always on TV. I've been watching pro wrestling since Jimmy "Superfly" Snuka first launched himself off the top turnbuckle, since Hulk Hogan body slammed Andre the Giant, since Joe Mirto first got his butt kicked on that fateful Sunday morning so long ago. Pro wrestling may not technically be a sport, but it is way more athletic than so many of the endeavors we call sports. And in the dead of summer, when no games at all are on, it's still the best distraction television has to offer.