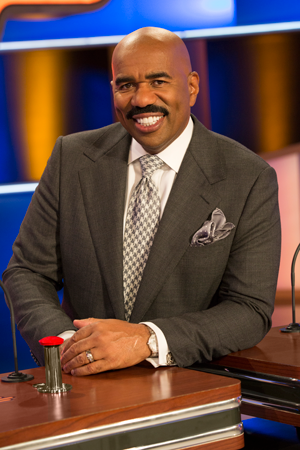 Each weekday, Harvey turns his insightful eye towards the family dynamic with his patented, no holds barred comedic perspective on relatives, relationships and beyond. Whether he is riffing on the current state of family ties or mining the humor to be found in a contestant interview, there is no telling what his one-of-a-kind, wisecracking banter will bring.

Steve Harvey began his successful stand-up comedy career in the mid-80s, which led to a long stint as host of "It's Showtime at the Apollo," as well as multiple TV sitcoms, including "Me and The Boys" (ABC), "The Steve Harvey Show" (The WB) and "Steve Harvey Big Time Challenge" (The WB).

Throughout his television success, Harvey never lost sight of his true passion for stand-up comedy. In 1997, he went on tour as one of the successful "Kings of Comedy" alongside Cedric The Entertainer, the late Bernie Mac and D.L. Hughley, which led to the taping of one of the most successful comedy DVDs in history – "The Original Kings of Comedy" – directed by Spike Lee.

In 2006, Harvey released "Don't Trip… He Ain't Through With Me Yet," a family friendly DVD unlike anything he had ever done before, and "Still Trippin," for fans who more used to his original, cutthroat, tell-it-like-it-is style of comedy.

Harvey also currently hosts his signature, syndicated radio talk show "Steve Harvey Morning Show," which is heard daily by over 7 million listeners in over 64 markets nationwide from 6-10 AM EST. The morning show has also allowed him to share relationship advice with his listeners through its "Strawberry Letter" segment, where he responds to relationship questions.

The overwhelming popularity of the "Strawberry Letter," led Harvey to write his first book entitled "Act Like A Lady, Think Like A Man" (Harper Collins), released on January 27, 2009.  The widely-acclaimed, #1 New York Times Best-Seller is Harvey's ultimate personal guide to unlocking the male mind, understanding his game, anticipating his moves and countering with unstoppable offense and defense.

Taped in front of a live audience, "Family Feud" is produced by FremantleMedia North America. Gaby Johnston is executive producer. Jim Roush is executive in charge of production. Ken Fuchs is director.