(CBS Detroit) - The Michigan Humane Society is seeking animal cruelty charges for those responsible for amputating a dog's leg with garden shears in an at-home procedure. 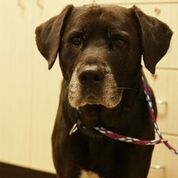 According to the Michigan Humane Society, the incident happened before noon Wednesday morning in the area of Holbrook Avenue and Conant Street in Hamtramck.

A concerned citizen reported the injured dog to the Humane Society. They then took the Dog in for treatment at Mackey Center for Animal Care on Chrysler Drive in Detroit.

The 7-year-old adult male black labrador's back lower right-rear leg was amputated.  The humane society says he's currently in good condition and despite being "grumpy," he can reportedly walk and is expected to live.

A spokesman for the Michigan Humane Society said they can't release many details due to the ongoing investigation, but that the tools used were recovered as evidence. He also said it was the "most horrific act" that CEO Matthew Pepper had seen in his 20 years in animal welfare.

A judge will later decide if the dog will go up for adoption.

© 2018 CBS Broadcasting Inc. All Rights Reserved. This material may not be published, broadcast, rewritten, or redistributed.