Police say 28-year-old Danielle "Dani" Stislicki left her job at MetLife on Telegraph Rd., north of 10 Mile, in Southfield at around 5 p.m. Friday, and was supposed to stop home and then meet a friend for dinner.

However, police say she never showed up for that dinner meeting, didn't make it to work as scheduled the next day, and hasn't been heard from since.

Stislicki's Jeep was found a day later, parked outside her home at the Independence Green apartments in the area of Halsted and Grand River in Farmington Hills. The vehicle was locked, police said, and Stislicki's purse — along with her ID and credit cards — was found inside. Police said they found no signs of a struggle.

Speaking at a news conference on Wednesday, Stislicki's mother and father said its out of character for her to disappear like this, that she's dependable, and that there's just no way she would up and leave without a word.

Her mom suspects she was abducted.

"Our concern is that Danielle is somewhere being held, not by her choice, and wants to come home — and we want to bring her home," she said, with tears in her eyes, issuing an emotional plea to the public for help.

"The way you can help is help spread this across the world, spread this to your family, coworkers, talk about it. I ask you, I plead as a family, as a mother, from the deepest of my heart, help us bring Danielle home...There is a huge community out there that Danielle belongs to and we need to go ahead and bring her home." 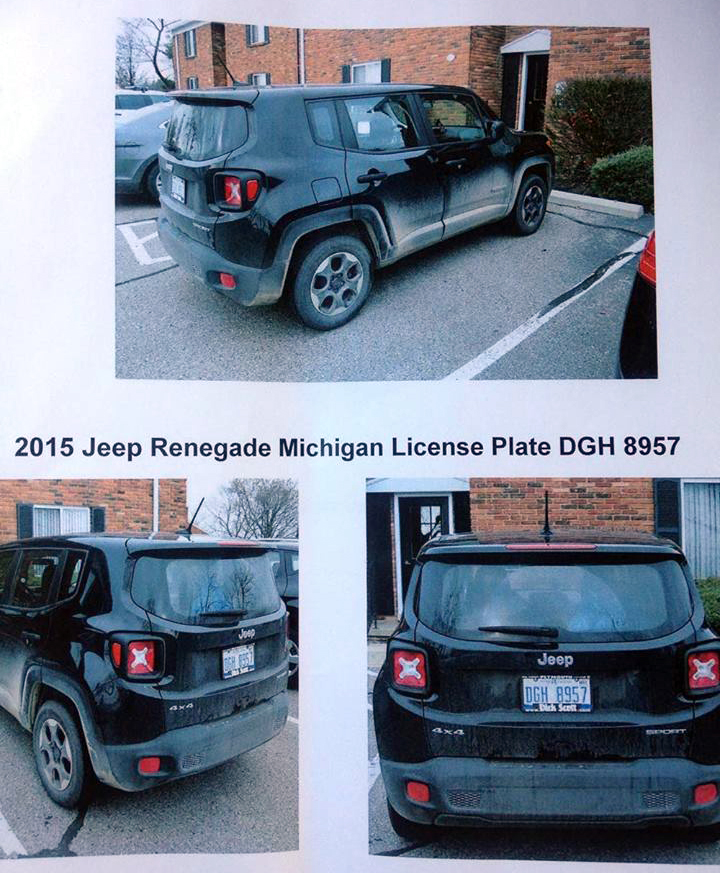 Anyone who may have been in the area of Stislicki's workplace or her apartment early Friday evening is asked to try to recall if they spotted Stislicki's vehicle — a dark gray Jeep Renegade, mud-covered on the bottom half — on the road, where, and at what time. Also, was she alone in the vehicle? And in what state did she appear?

Investigators want to speak to:

Police are also looking for Stislicki's keys, with a distinctive key charm: a smiling yellow figure with a green body and yellow legs; as well as her cell phone: a Samsung  Galaxy Core Prime phone in a rose-colored case.

Stislicki is described as 5 feet, 5 inches, about 123 pounds, with brown wavy medium-length hair. She was wearing jeans, a black zip-up shirt, a sky blue Eddie Bauer 3-in-1 jacket and burgundy boots. She has no known mental health issues.

A cash reward raised via GoFundMe for information leading to Stislicki's whereabouts is up to over $16,000. In addition, a $50,000 reward is being offered by Independence Green Apartments upon the safe return of Danielle and an arrest and conviction if illegal activity was involved.

About a  dozen law enforcement agencies, including the FBI and Secret Service, are now involved in the investigation.

Anyone who may have seen this missing woman with information should call Farmington Hills Police Command Desk anytime at 248-871-2610. Tipsters may remain anonymous.