Augusta National first postponed the Masters. Now the home of the Masters is closing its club.
Golf Digest obtained a letter from Chairman Fred Ridley to Augusta National members that says the club will close by the end of the week because of increasing concerns over the new coronavirus and how it might affect the staff. 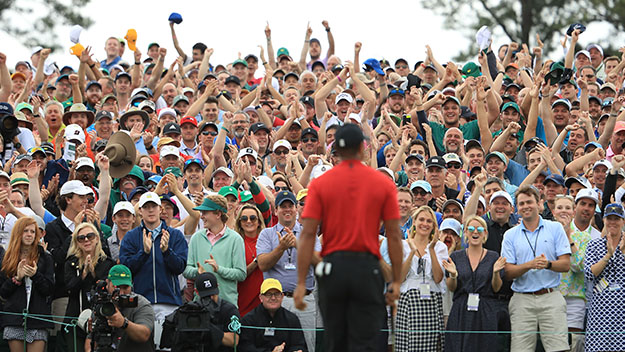 The club would confirm only that a memo had been sent.
"Beginning today, we are taking the necessary steps to curtail our operations so, by the end of this week, the Club will be closed until further notice," Ridley said in the memo obtained by Golf Digest.
Ridley said the grounds would be maintained with limited personnel and said other duties would be handled remotely. He said he would review the situation and send timely updates, and he thanked the members for "patience and trust as we plan for the realities of this pandemic."
The Masters was scheduled for April 9-12. This will be the first time since 1946 — when the Masters resumed after World War II — that golf's most viewed tournament is not the first full week in April. Augusta National closes about a month after the Masters for the summer and reopens in October.
Still to be determined is when it could be rescheduled, which is the club's plan. Ridley's letter comes one day after the Centers for Disease Control and Prevention recommended that events of 50 or more people be shut down for eight weeks. That would last until the second full week in May.
Still up in the air is the second major of the year, the PGA Championship, scheduled for May 14-17 in San Francisco.
The PGA of America on Monday postponed its annual championship for club professionals that determines which 20 play in the PGA Championship — but that's assuming the major is held.
The PGA Professional Championship was scheduled for April 26-29 in Austin, Texas. If the PGA Championship is held, the leading 20 club pros from its player-of-the-year points standings in 2019 would be selected.
The PGA of America says it is staying in touch with officials from San Francisco and state leaders in California, evaluating plans and keeping health the highest priority. San Francisco was among six Bay Area counties that were issued an order Monday for residents to stay inside and to venture outside only for necessities for the next three weeks.
The PGA Tour already has canceled three events leading to the Masters. The tour has not said what it would do in response to the eight-week recommendation from the CDC. After the Masters, the next four PGA Tour events are in Hilton Head Island, South Carolina; New Orleans; Charlotte, North Carolina; and Dallas.
The CDC said events of any size should be held if they can adhere to guidelines for protecting vulnerable populations, hand hygiene and social distancing.
The PGA Tour originally contemplated finishing The Players Championship last week and playing its next three events with no fans, limiting the presence on the course to three players and three caddies on each hole, along with a walking score and minimal marshals.
Meanwhile, the PGA Tour Champions said it was canceling the MasterCard Japan Championship in Chiba on June 12-14.
"The potential logistical issues associated with players and staff traveling to and from Japan limit our ability to successful stage the 2020 event," said Miller Brady, president of the 50-and-older circuit.

© 2020 Associated Press. All Rights Reserved. This material may not be published, broadcast, rewritten, or redistributed.