DENVER (CBS4)- It's back by popular demand-- Wicked is showing at the Buell Theatre through July 5, in its fifth return to Denver.

While the story of the misunderstood green girl from Oz stays the same, the show brings a brand new cast to the stage. Alyssa Fox and Carrie St. Louis preform ad the title characters.

"This cast that we have is phenomenal right now," said performer Ashley Parker Angel.

"It's big shoes to fill when you come into wicked as an actor," said Angel.

Taking the audience to Oz is no easy task with thousands of dollars in production equipment and dozens of crew members working together. Their duties include controlling the infamous wizard to changing the elaborate sets in just minutes.

Music is a big part of the excitement surrounding the show but the costumes and set design rank right up there. The costume budget is $2 million.

The cast of Wicked has 16 actors often playing multiple roles, at one point they only have 90 seconds to change costumes. 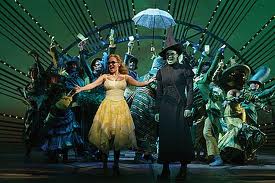 Whether fans come for the music, the magic or the nostalgia of Oz, Angel said at the end of the tale, they stay for the story.

Wicked is playing at the Buell Theatre through July 5.