DENVER (CBS4) - Thunderstorms can happen at any place on Earth if the right conditions are present. They are most common in the tropics and sub-tropics which are located between 0 and 30° latitude in each hemisphere. We call this part of our world the lower latitudes.

Colorado lies just to the north of this region in the middle latitudes, between 30 and 60° in the Northern Hemisphere. And despite living outside of where the "prime" conditions exist for thunderstorms we experience a large number of them each year. In fact Colorado records more days with thunderstorms on average than Nebraska and Kansas. 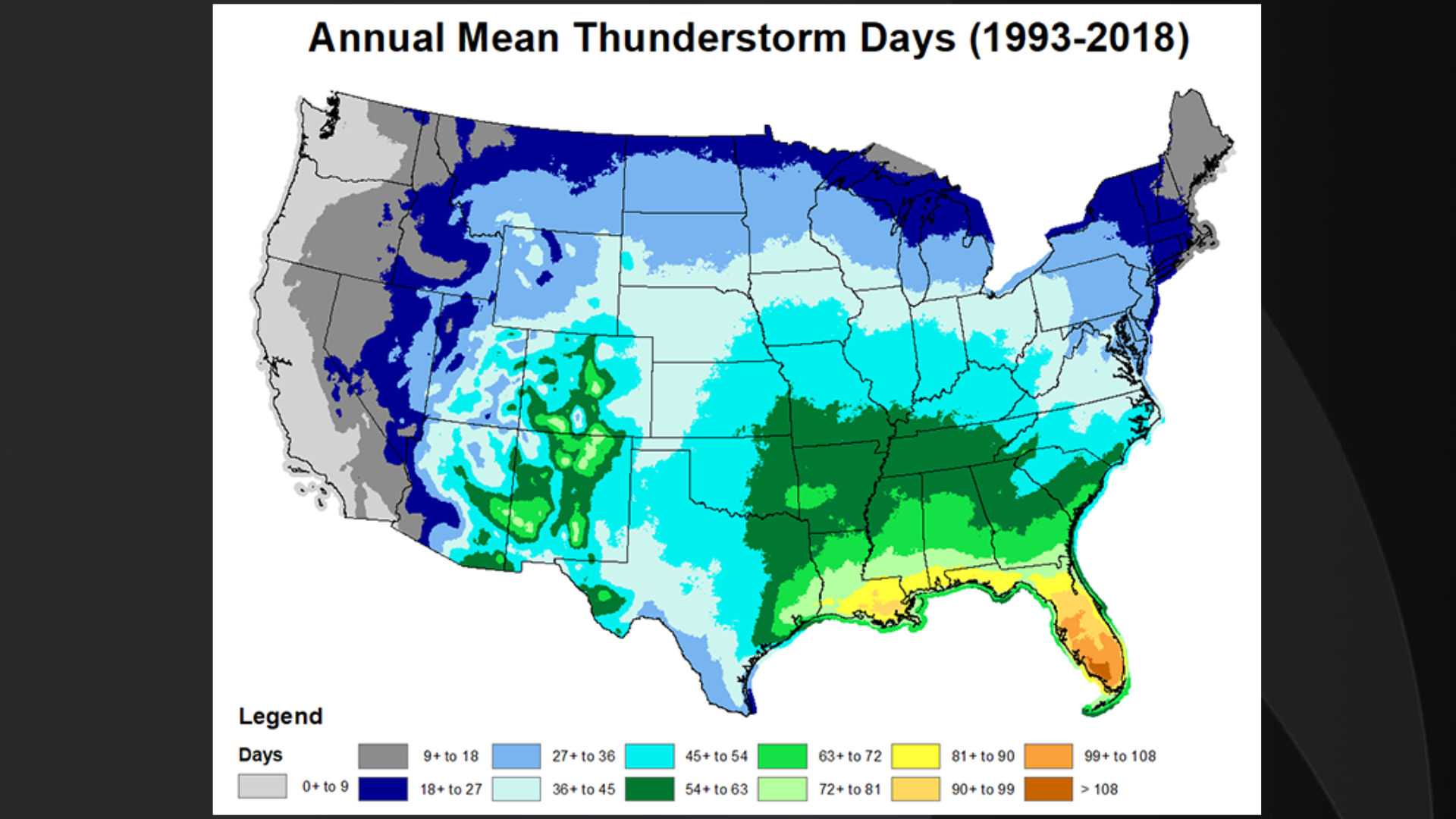 In the United States thunderstorms are most common along the Gulf Coast, and that makes sense, given the consistent warm air and the ample source of moisture from the Gulf of Mexico. But Colorado and the Four Corners region, a part of the country known to be dry, actually rivals southern states like Arkansas, Tennessee, and most of Mississippi, Alabama and Georgia, for the number of days each year with thunderstorms. So what is happening?

To understand this let's start with the basic ingredients needed to form a thunderstorm. First we need warm surface air temperatures that are at least in the 60s but hopefully in the 70s or higher. The warm air will help provide instability in the atmosphere, allowing clouds to grow big and tall. That is a pretty easy box to check in Colorado. Daily temperatures in excess of 60 degrees occur on most days between late April and the middle of October. 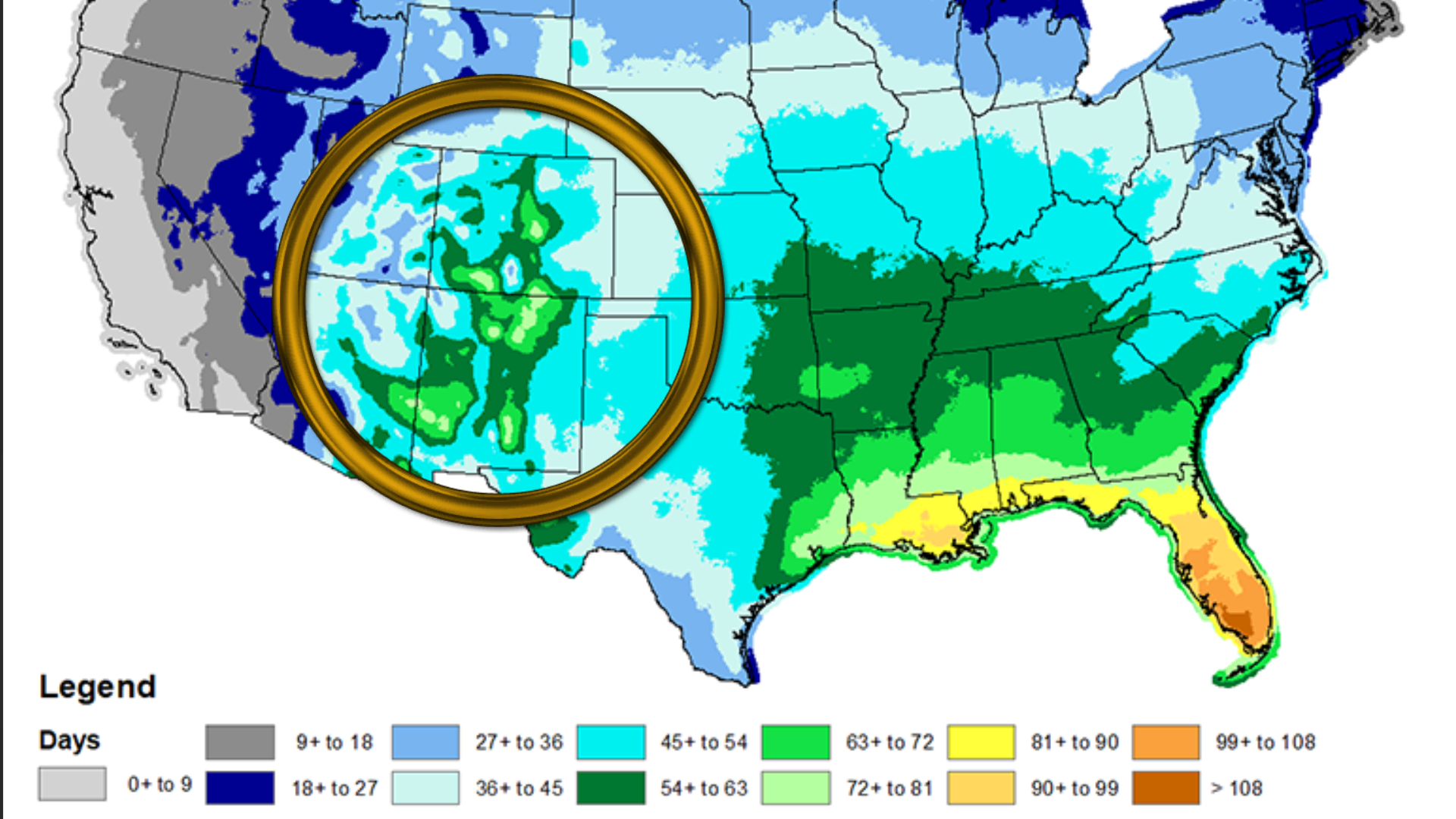 Second we need a good supply of water vapor in the air. Many will call this humidity or moisture. Water vapor is transported to Colorado by surface winds out of the south or southeast. During the summer monsoon the direction can be from the west or southwest depending on the upper-level steering pattern.

Water vapor is a very important part of the puzzle because it contains a hidden energy called latent heat. This energy will help fuel a storm as it gets released into the atmosphere during the process of condensation, or the formation of a cloud. 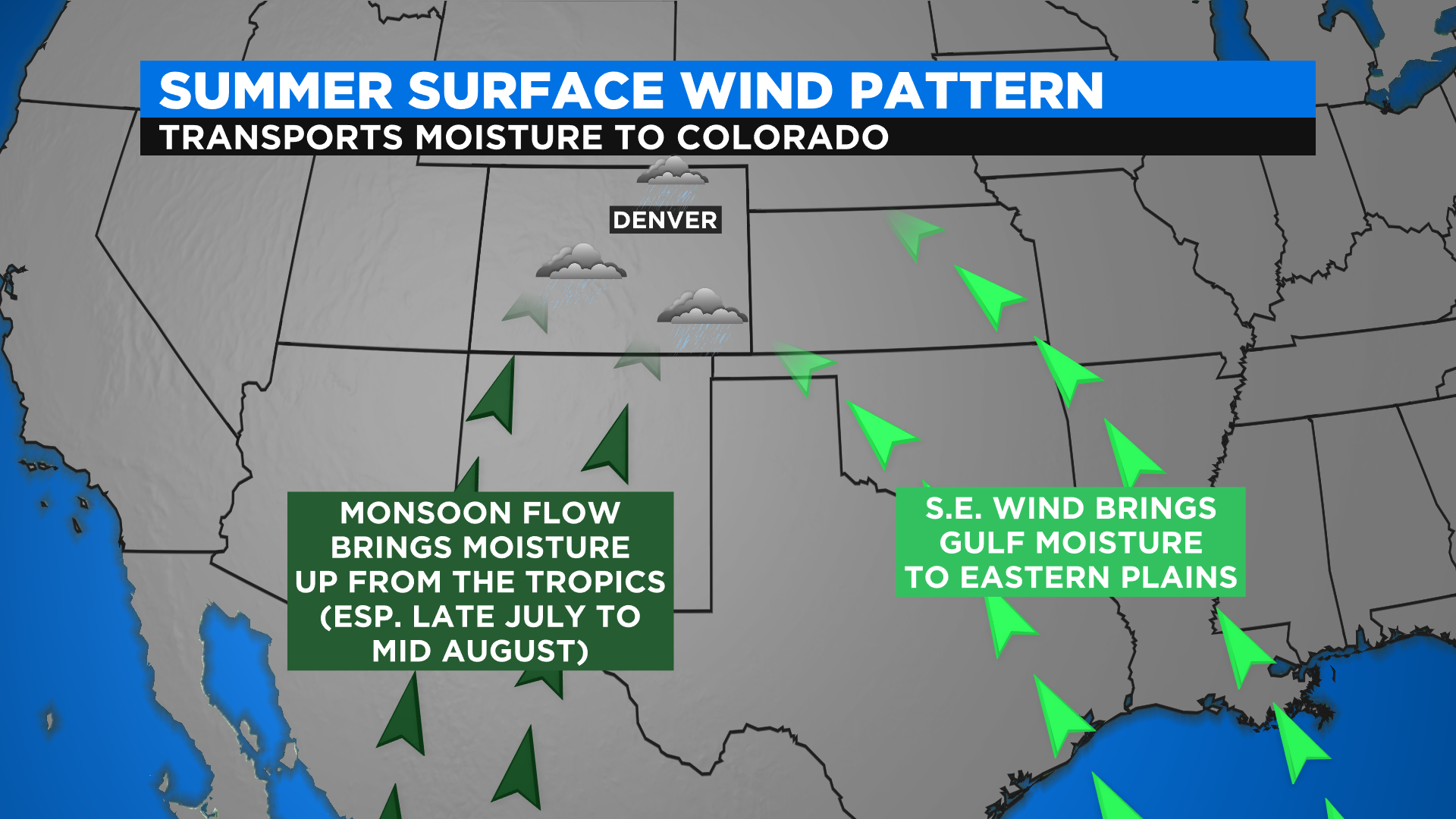 When it comes to the daily forecast for thunderstorms water vapor is often the wild card in the forecast. Most days feature perfect temperatures to build thunderstorms big and tall, but we are often lacking the right amount of moisture.

We like to see dew point temperatures around 45°F or higher. The more moisture in the air the better chance for a storm to produce rain and hail. If the dew point is under 45°F you can still get a thunderstorm with rain or hail but it will probably have more lightning and wind than anything else. We call these "high-based" or "dry thunderstorms" because the base of the clouds are so high off the ground that very little precipitation makes it down to the surface.

Have you ever heard of the term virga? It is rain falling from a cloud that is evaporating before it reaches the ground. Because we have so much dry air near the surface in Colorado we see a lot of high-based thunderstorms. (now you know why virga is so common)

The third part of the thunderstorm ingredients list is rising air. In meteorology we teach about four ways to make the air rise. Two involve large scale motion such as convergence at a low pressure and lift along a weather front.

The other two, convection and topography, involve small scale or more localized motion and they help explain why we have so many microclimates in Colorado. Let's talk about convection in more detail. 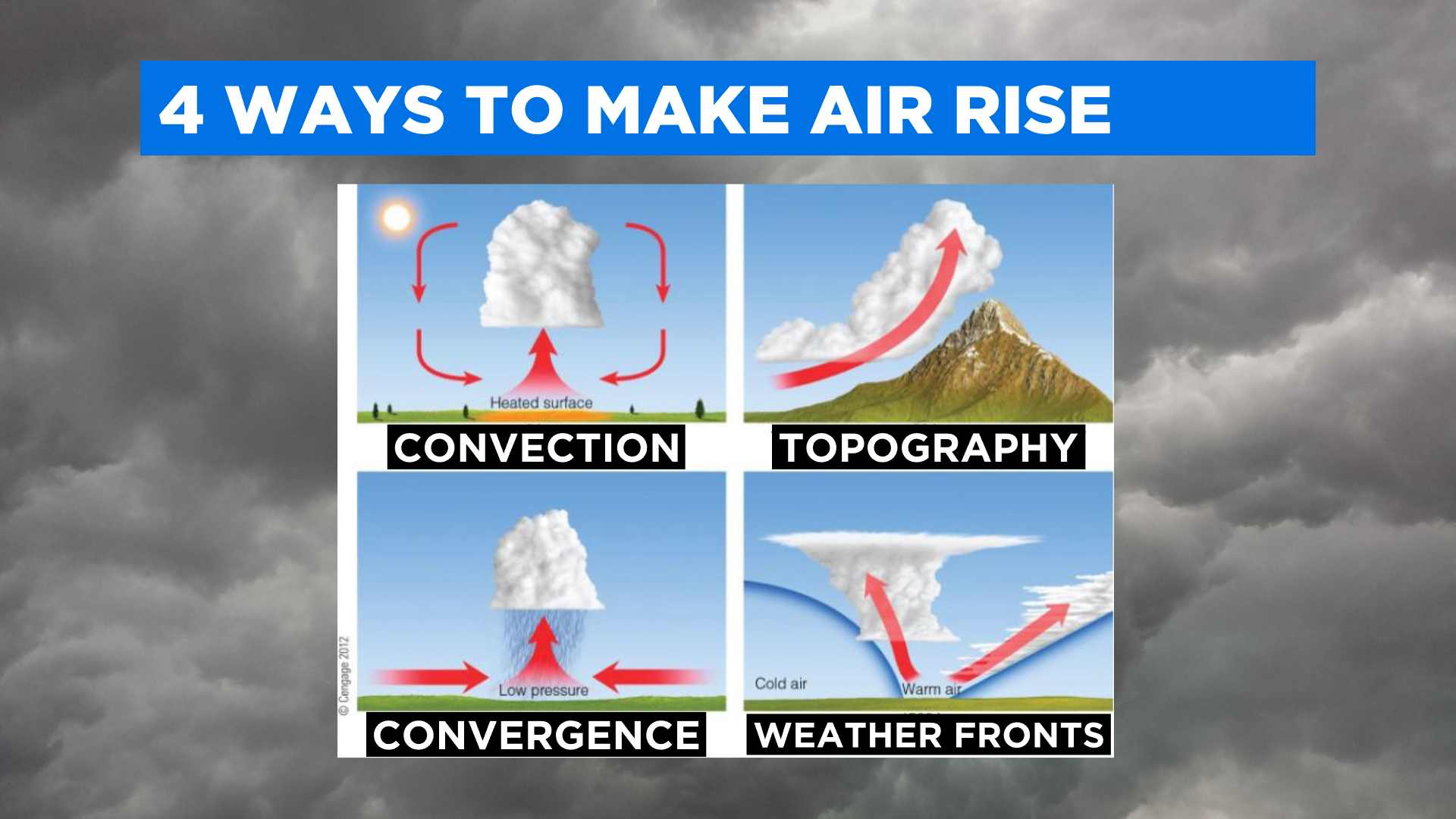 When the sun comes up each day it starts to heat the ground. The ground immediately begins to transfer that energy to the air touching it. As the air touching the ground heats up it will begin to rise. These processes working together create a churning motion in the lower part of the atmosphere that we call convection.

With each passing hour the churning motion will get larger and larger until we reach peak heating in the mid to late part of the afternoon. As the sun lowers on the horizon and eventually sets it stops heating the ground and the churning motion will gradually wind down. The air will be the calmest right around sunrise the next day. The concept of convection is why we love to sit outside and have coffee in the morning.

Mornings are calm and still on most days because the atmosphere has settled down and there is no convection. It's pleasant and relaxing. But by late in the day when the air is really churned up we experience gusty and erratic winds while sitting outside. It's not so pleasant.

The concept of convection is why thunderstorms are most common during the hot part of the day. By the mid to late afternoon when the air is the most churned up and rising really high into the sky, thunderstorms can grow big and tall. 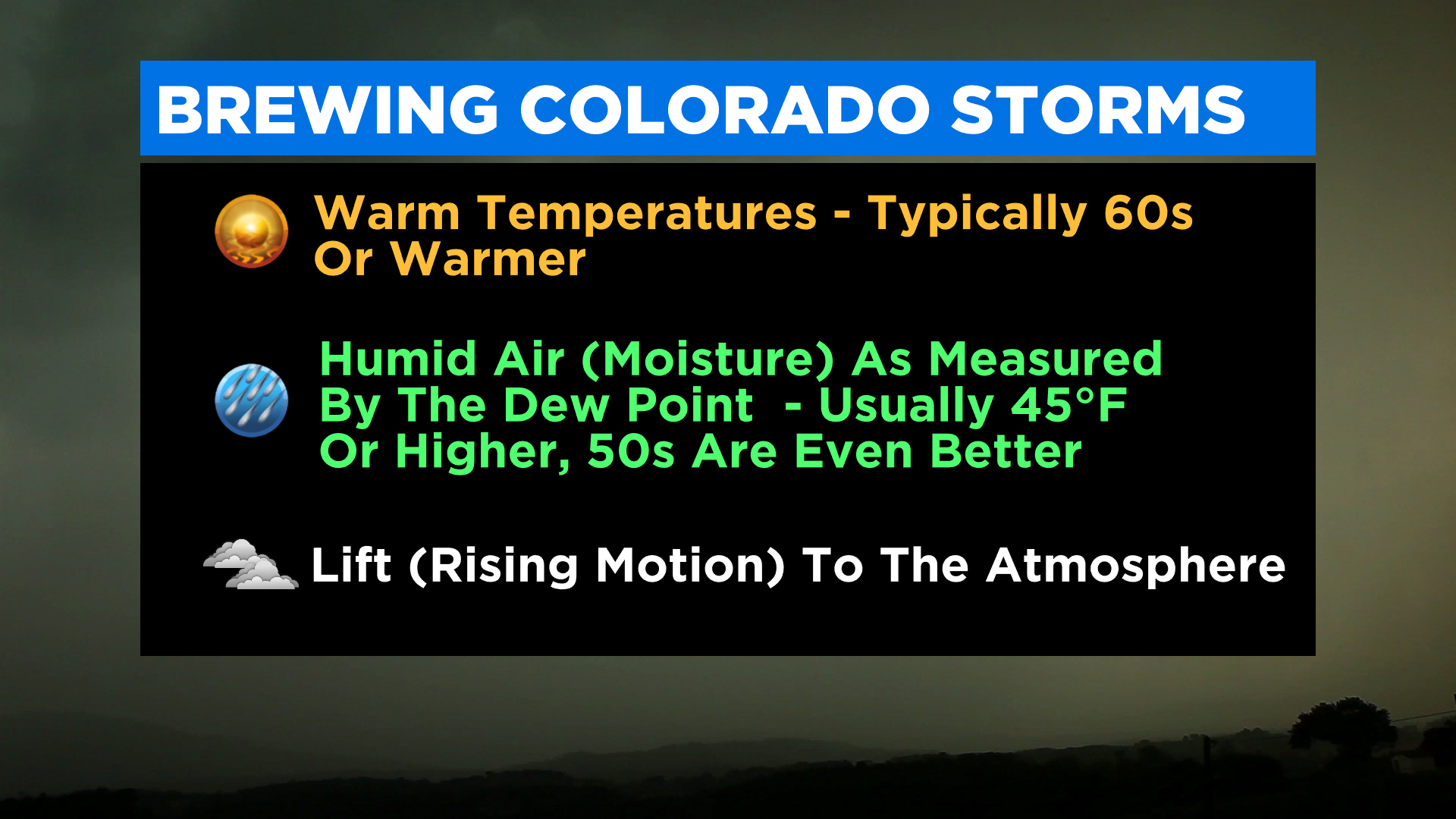 Now that we are churning, let's add in our topography, which aids in forcing the churned air to rise even higher. These two features working together are a daily thunderstorm generator for Colorado. We don't really need a large scale weather feature like a low pressure system or a cold front to help fire up thunderstorms in Colorado. As long as there is enough moisture in the air at the surface we can fire up at least a few thunderstorms each day simply due to convection and our terrain.

Have you ever noticed that most days during the summer feature a 10 or 20 percent chance of storms in the forecast? Hopefully now you will see why. We meteorologists know that most days will produce at least a few storms somewhere.