BROOMFIELD, Colo. (CBS4)- A rattlesnake bit a man along a popular trail in one Broomfield neighborhood and now people who live in the area are being urged to be aware of their surroundings and the possible threat of snakes.

Todd Wessels recently was released from the hospital, after the snake bit him near the intersection of Lilac Street and Lilac Court along the Broomfield Trail.

Wessels' dog had escaped from his home moments earlier and was the first one to spot the snake.

"She was just standing there barking like crazy," Wessels said.

Wessels said the snake bit him as he attempted to pull his dog away from the reptile.

"Everybody was freaked out," said Peggy Morton, Wessels' wife.

Morton was nearby and arrived on scene as first responders rushed to help her husband.

Paramedics with North Metro Fire Rescue called Good Samaritan Hospital in advance to make sure they had anti-venom to treat him.

Morton said the medics considered airlifting Wessels to another facility if the nearest hospital did not have the anti-venom available.

"He could just feel [the pain] all the way up to his stomach. It was like somebody just filled him full with gasoline, and lit it on fire," Morton said.

Wessels said he was thrilled to see how quickly paramedics responded and got him Good Samaritan for treatment.

"They had to check it every half hour, just to see the growth [of the wound]," Morton said.

Photos show how quickly the venom spread, covering most of Wessels' leg within hours.

Wessels said the pain of the anti-venom treatment may have been more significant than that of the bite.

"Your whole body actually starts to burn inside," Wessels said.

Several residents said the trail is very popular among residents and nearby business workers. The trail connects parks, businesses and homes.

Morton said children are often nearby playing while their family members walk their dogs.

Wessels said, in hindsight, he may have been in the right place at the right time. He said two young children were walking home from the park moments after he was bitten.

"Better me, than them, honestly," Wessels said.

Now, the family is encouraging neighbors to remain vigilant.

"Where there is one [rattlesnake], I'm sure there are plenty more," Morton said.

Colorado Parks and Wildlife sent CBS4 a document which details how to remain safe among rattlesnake season. 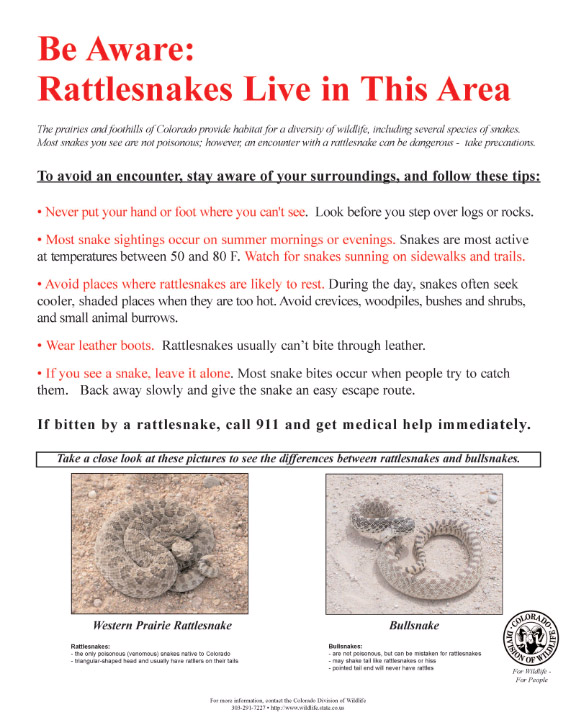