DENVER (CBS4)- Protesters disrupted business at the Wells Fargo bank in downtown Denver on Friday. They're upset that work has resumed on the Dakota Access Pipeline.

Several hundred demonstrators gathered at the state Capitol to protest the pipeline.

Their goal is divestment, their strategy to go after companies involved in financing the construction.

The protest leader, Glenn Morris told those gathered, "There are financiers of this pipeline and we have addresses and names and some are in our community."

Construction has been approved to resume for the Dakota Access Pipeline near the Standing Rock tribal reservation. The demonstrators left the state Capitol steps and marched through downtown Denver.

One protestor told CBS4's Rick Sallinger, "Our treaties our rights have been trampled on, they made these treaties."

Their destination, the Wells Fargo bank location at 17th and Broadway. Wells Fargo has been involved in the financial aspects of the pipeline. 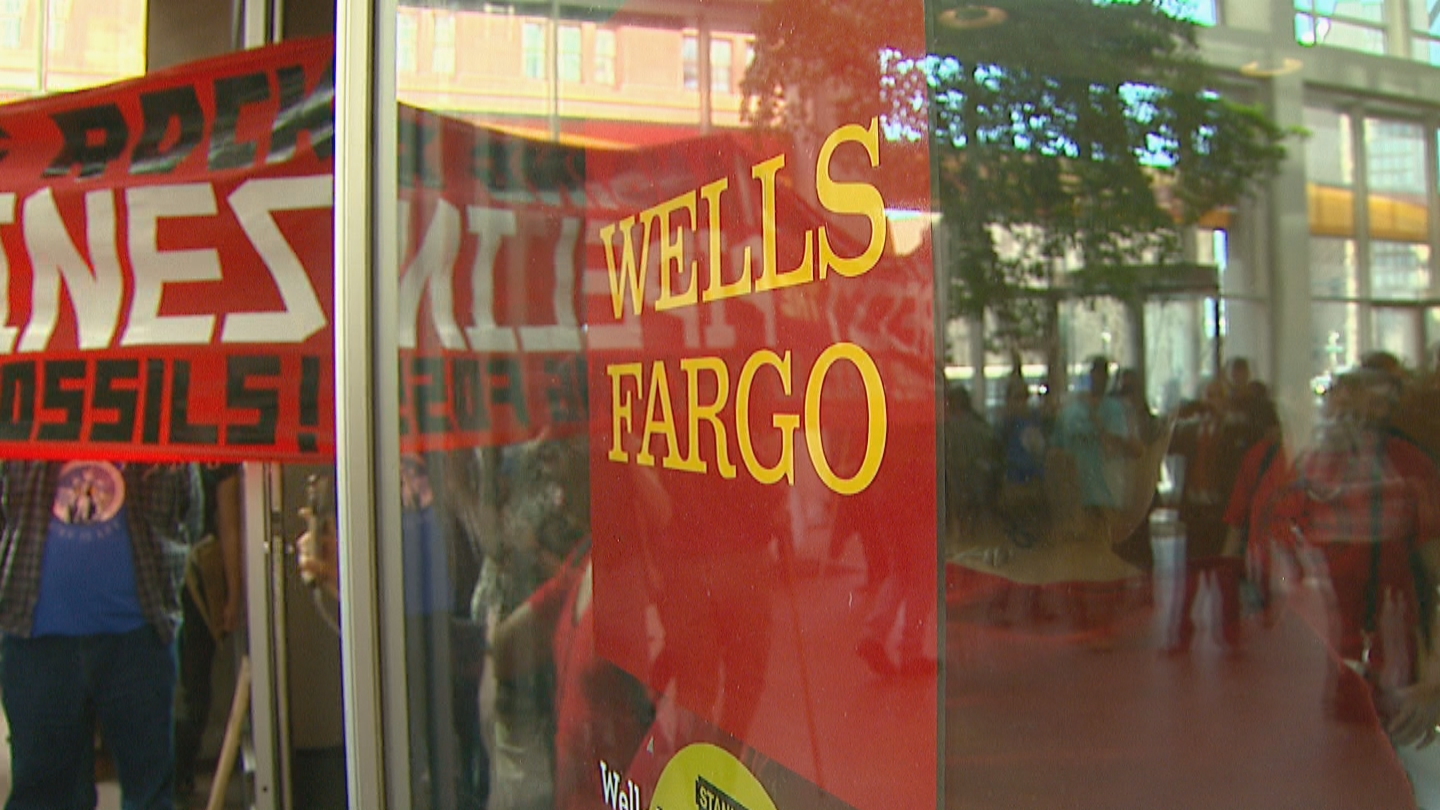 The doors to the lobby were locked when protesters arrived. The protestors then moved into the atrium of the office building.

Finally, a door to the bank lobby opened slightly and protestors pushed their way in.

Business was brought to a halt inside the lobby. The demonstrators were turned down in their request to meet with Wells Fargo officials. The bank has defended its role in the pipeline saying it is one of many banks provide a credit facility to the contractor.

Using a megaphone, a Denver police officer told the demonstrators inside, "You are on private property. You have three minutes to get out or be arrested."

With the clock running the group headed for the door.

Glenn Morris then told CBS4, "They didn't do business here today every employee had to stop and think what they are doing as a corporation."

They left promising to return if their demands are not met.

"As a company committed to environmental sustainability and human rights, we respect all the differing opinions being expressed in this dispute. We are closely following the developments in this situation and are hopeful that all parties involved will work together for a peaceful and positive outcome.

"The DAPL project was evaluated by an independent engineer to be compliant with the Equator Principles, a framework adopted by Wells Fargo in 2005 that is designed to determine, assess, and manage social and environmental risks and impacts of projects. As a result of issues that have arisen in this case, we have enhanced our due diligence in sectors subject to our Environmental and Social Risk Management policy to include more focused research into whether or not indigenous communities are impacted and/or have been properly consulted.

"Wells Fargo is one of 17 financial institutions involved in financing the Dakota Access Pipeline. The loans we have provided represent less than 5 percent of the total. Our role is strictly limited to providing credit under the credit facility itself. We are contractually obligated to fulfil our legal obligations under the credit agreement so long as our customer continues to meet all of its terms and conditions."