"So yeah, we believe it's a problem and we're working on it but it's nothing to alarm people and make them believe they live in an unsafe city," said Denver Police spokesperson Lt. Matt Murray.

The statistics cover crimes from January through the end of August and show a citywide rise in crimes against persons of 4.3 percent compared to the same period in 2010.

Murray and other police officials argue that their own statistics are skewed because 2010 was a comparatively low crime year with an abnormally low number of homicides. He said Denver crime stats viewed over a longer period of time would not be so alarming. But he acknowledges the year to year numbers are eye-catching.

"There's 105 more serious assaults -- that's a problem," said Murray. "When we see an 8 to 9 percent spike, that's something we are looking at."

The number of armed assaults has risen to 133, since Murray was interviewed.

Police are acutely aware that some of the most dramatic rises in crimes against persons are in the Central Business District -- downtown Denver.

While there were 22 simple assaults last year in the Central Business District, so far this year, there have been 54, a 145.5 percent increase.

"We're aware of it, we're addressing it and we shift resources to impact it," said Murray. "But there's a point where there's only so much you can do."

Dan Lickteig, who has managed a Sunglass Hut store on Denver's 16th street mall for five years, said he has noticed the changes.

"Yes, I have noticed an increase but do I feel more at risk? No, just more aware. I'm noticing more crime in general," said Lickteig.

He noted the 16th Street Mall feels, "A little bit edgier than three years ago."

Lt. Murray said there is no simple answer. Instead he said there are a variety of factors like a struggling economy. He said the police department looks at other issues like recreation center hours being cut back, grant money slashed and a police department with fewer resources to address crime.

CBS4 has also learned the police department is looking at the conduct of its own officers, and how that is impacting crime patterns. Information released to CBS4 by DPD shows that after certain high profile police discipline cases, proactive police work dropped off citywide.

When a videotape was released in April showing two officers tussling with citizens, the two officers were fired for lying about what happened. The next month, May, police activity charts show a distinct drop off in proactive police work.

"We are aware of that," said Murray, "and commanders are aware of that and they are addressing it in their own respective manners. It's clear to us that events and morale of the officers impacts the way they perform. We know crime is impacted by proactive efforts of police. Proactive police work does impact crime." 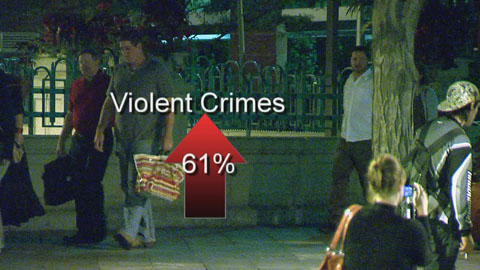 DPD says to lessen the chances of being a victim of violent crime downtown, leave the area before midnight.

Be observant and pay attention to who is around you. Travel in pairs or groups and call a cab if you have been drinking.

Murray says over indulgence in alcohol has been a major factor in who is targeted. The majority of victims were intoxicated according to Murray and in some cases, "They don't have a clue who assaulted them."