WESTMINSTER, Colo. (CBS4) - Police arrested a man in Westminster that they suspect is the shooter who killed three people inside a Walmart in Thornton on Wednesday.

CBS4 video captured just before 8 a.m. shows Scott Ostrem being handcuffed on the street and put in a police car near 72nd Avenue and Federal Boulevard.

Ostrem, 47, of Denver, was identified Thursday morning as the suspect in Wednesday's shooting.

Ostrem's last known address was in the northern part of the Denver near the intersection of 72nd and Pecos Street. That's close to where he was arrested.

Police say the suspect walked into the Walmart at Grant Street and 98th Avenue just after 6 p.m. and began randomly firing a handgun. Two men were shot and died and a woman who was also shot was taken to the hospital and died soon afterwards.

After the shooting, witnesses say the suspect quickly ran out of the building.

Witnesses who were inside the store at the time of the shooting said they heard shots being fired, but they thought the sounds were possibly balloons popping inside the store. It wasn't until they saw people running, some getting down on the floor to hide and some people crying that they realized there was something seriously wrong. 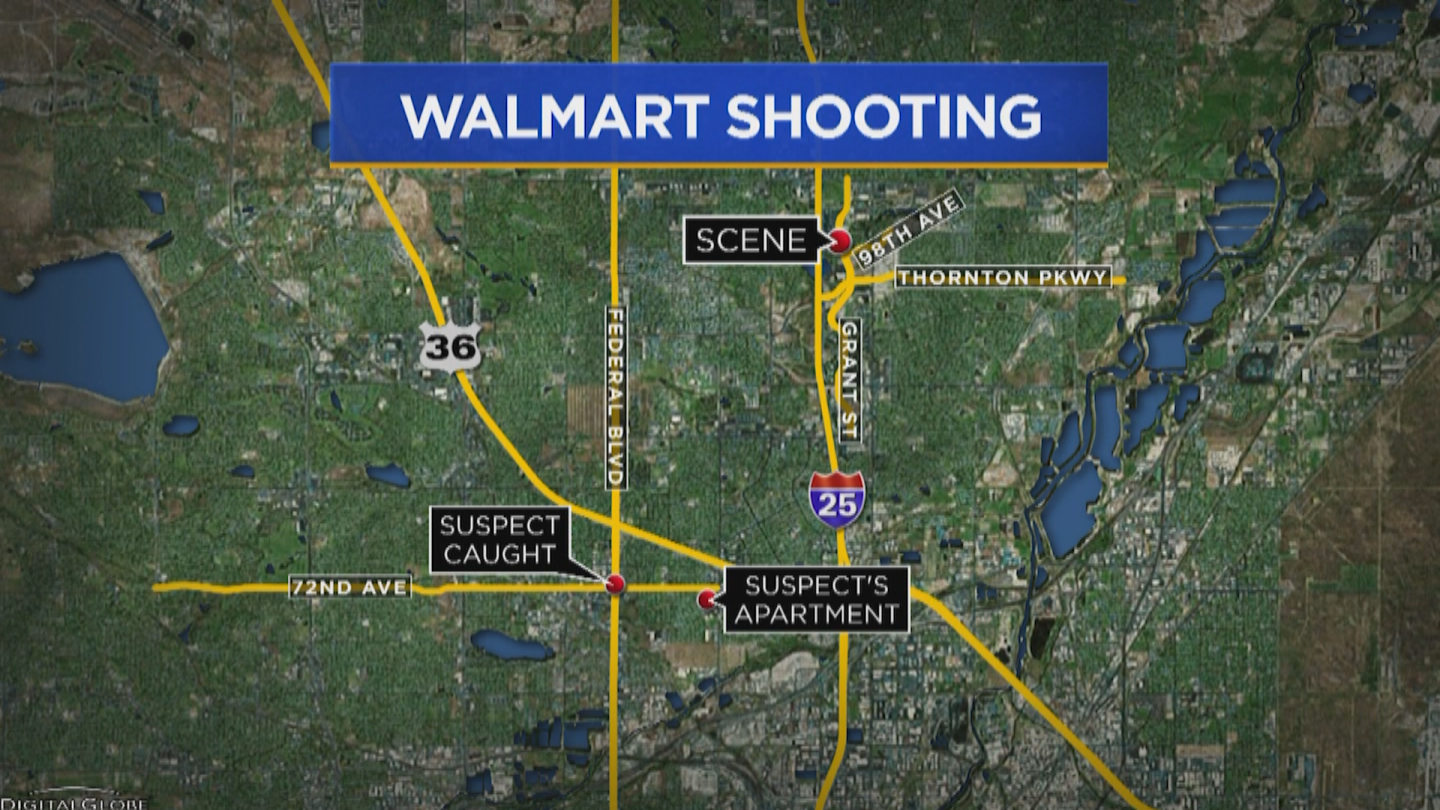 "I immediately froze because I didn't know what to think or what was going on. And then I heard two more shots and I hit the ground," said witness Aaron Stephens. "I was thinking 'Omigod, it's Las Vegas happening in Walmart in Thornton. And I freaked.'"

The FBI and the ATF are assisting Thornton police with their investigation. When asked if this was a terror attack, police responded in the following way:

"As of right now we can't rule anything out, however we don't have any indication right now of anyone claiming to have taken responsibility for anything, as of right now," Avila said late Wednesday night.

The Walmart was closed after the crime and the parking lot was off limits until Wednesday morning, when shoppers were allowed to return to get their vehicles.

The three victims of the shooting have not been identified.

"On behalf of the city I just want to extend my deepest sympathies and condolences to the victims' families and their loved ones. Obviously this is a huge tragedy for them, for the witnesses, for the employees at Walmart," said Thornton Mayor Heidi Williams.

According to CBS4 investigator Brian Maass, Ostrem filed for bankruptcy in 2015. He had 14 arrests in Colorado, most of which were minor. The last one was in 2013 for DWAI.

"Mr. Ostrem did not have an extensive criminal history," said Avila.

The Walmart remained closed on Thursday. It was unclear when the store will reopen.

Ostrem is scheduled to appear in Adams County court at 11 a.m. on Friday.