DENVER (CBS4)- A CBS4 Investigation has found some business class flights to Paris last month for Denver Mayor Michael Hancock, his appointees and Denver International Airport administrators cost between $7,000 to $9,000 with some roundtrip tickets running nearly $16,000.

"These flights are expensive, and we acknowledge that," said Stacey Stegman, a spokesperson for Denver International Airport.

CBS4 found two newer DIA employees on the trip, office manager Katie Halbert and DIA travel administrator Katie Houlmiere, flew to Paris on Lufthansa business class at a cost of $8,917.80 each. Their return flights on Lufthansa business class from Paris to Frankfurt to Denver cost $6,734. Meaning the two mid-level administrators round trip flights from Denver to Paris cost $15,651.80.

A ticket for DIA Deputy Director of Aviation Patrick Heck from Denver to Paris on United Airlines cost $8,858.90 one way, with his return flight costing $6,734.

"This is like a joke," said Susan Barnes-Gelt, a former Denver City Council representative and co-author of the City of Denver's ethics code for elected officials. She reviewed the plane tickets and invoices CBS4 obtained via a Colorado Open Records Act Request.

"I mean it's a joke. There's no serious answer because nobody does that. The message is, 'We don't care what you think,'" said Barnes-Gelt.

The April trip was ironically to partly celebrate the inaugural trip of low cost airline Norwegian Air, which began non-stop flights between Denver and Paris. Norwegian offers fares as low as $300 from Denver to Paris.

Part of the five-night trip was also devoted to economic development in France. About 15 Denver government officials and DIA administrators were on the trip, which cost about $13,000 per person for five nights. It now appears this high per person cost was partly driven by expensive business class fares for many of the city officials.

Those kinds of fares are allowed under a DIA policy which has been in effect since 2010. It allows DIA employees to upgrade to business class on flights out of the country that are longer than five hours in length. It applies to other city officials whose flights are being paid for by Denver International Airport.

"We want to give our employees time to rest on the plane so they can get there and be effective for work," said Stegman.

Asked why the policy also allows for business class travel on the way back to Denver, she responded, "A lot of times they're leaving fresh from a meeting and getting on a plane and coming back and there's no time to relax. We give them time on the plane to feel rested."

The trip was characterized as "Mayor Hancock to Lead Economic Development, Trade and Tourism Mission as part of Inaugural Non-Stop Flight from Denver to Paris," according to an April 6 news release from Hancock's office.

While in France, the delegation received economic briefings, met with French industry leaders, and then flew to Brest, Denver's Sister City in France. They then continued on to Normandy and visited Omaha Beach.

"The travel and accommodations for city officials will be paid by Denver International Airport, and in part through the General Fund," stated the news release. The DIA funds are derived from airport revenues like parking, concessions and the like.

CBS4 found that although the trip had been in the works for months, flights for DIA and city officials weren't booked until sometimes days or several weeks before departures, driving the costs up even more.

"You are absolutely correct," said Stegman, "We should be booking these flights further out . It's something we are working on and trying to get better at."

For the flight over, Hancock and his entourage flew Norwegian Air's premium class for about $1,300. On the return flight, Hancock and half a dozen city and DIA officials flew Lufthansa business class from Paris to Frankfurt and then back to Denver. Each of those tickets cost over $6,700. The total for those seven city travelers for that return flight was more than $47,000.

Stegman went on to say it is important for airport and city officials to fly business class and support airlines that offer non-stop long haul flights, "We try very hard to support our airlines with non- stop flights and part of that is flying in the front of the plane. "

After being confronted with what CBS4 had found, Hancock responded, "The costs associated with booking this trip were too high. Earlier booking and a return on the same airline would have been inconvenient but would have mitigated the costs of these flights. Although taxpayer dollars aren't used, the airport must demonstrate greater accountability to the public and, when feasible, book these trips with every effort toward limiting what they spend. Thus, we are making changes going forward to address these concerns." 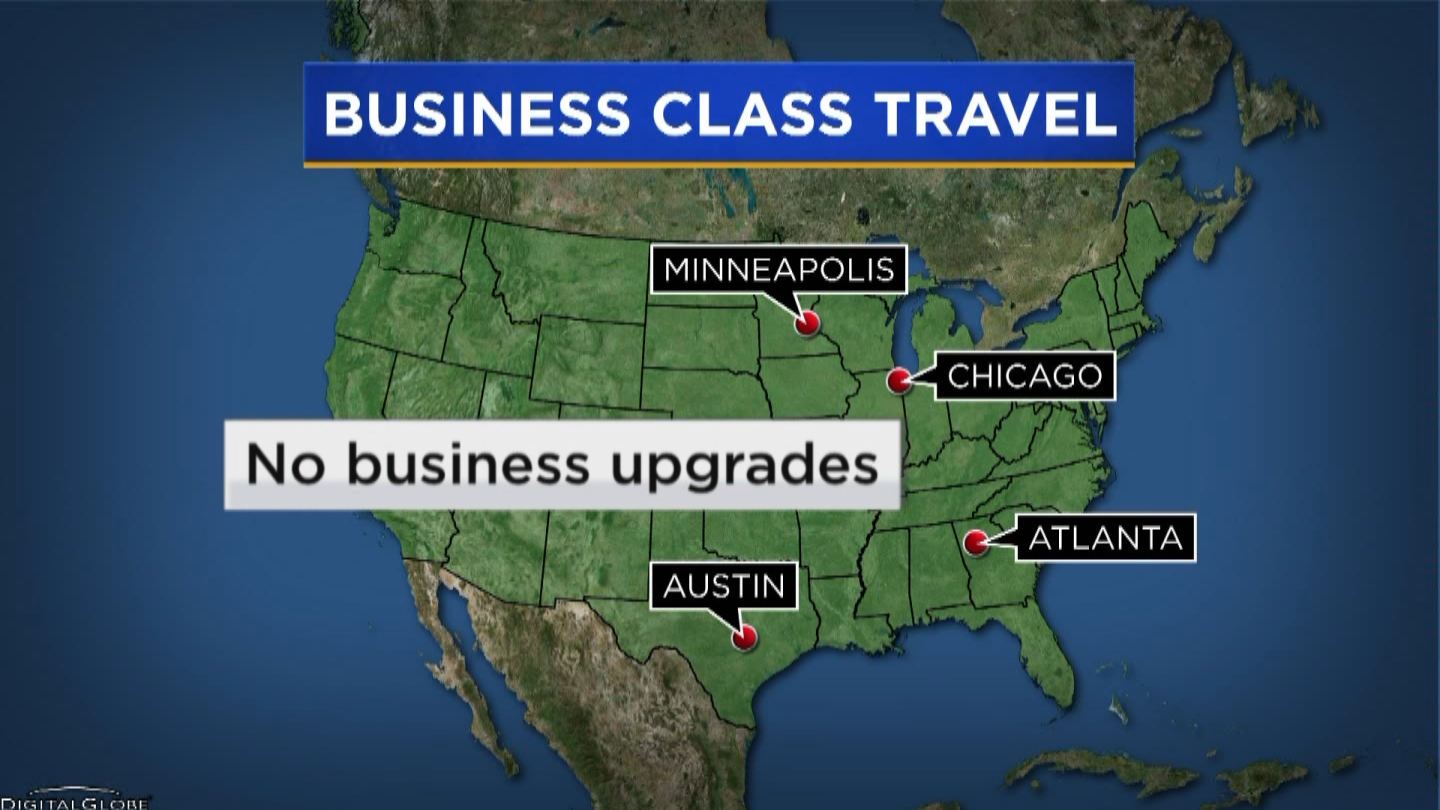 While some U.S. airports like San Francisco, Houston, Seattle and Orlando do allow their staff to upgrade to business class for longer flights, many do not.

Chicago, Atlanta, Minneapolis-St. Paul and Austin are among the airports that do not allow their staffs to upgrade to a higher class of service. Los Angeles International airport only allows staff upgrades on flights exceeding 14 hours. 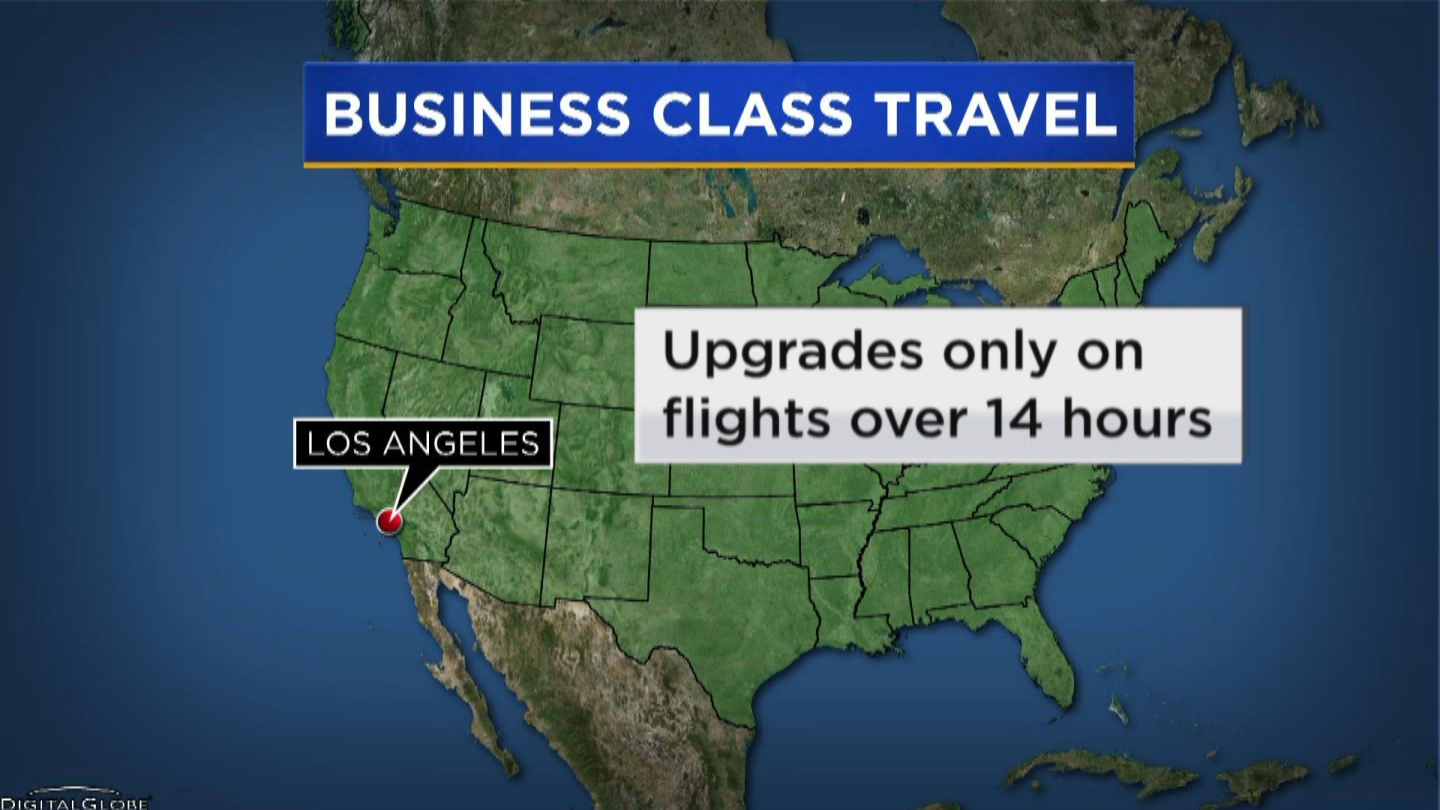 INTERACTIVE MAP: Click on the map below to see how upgrade policies compare at airports across the country

And while DIA allows its staff, per city policy, to keep all of their frequent flyer miles accrued on official city business, other airports like Chicago, Atlanta, Houston and Orlando do not allow frequent flier miles to accrue to individual travelers.

Stegman told CBS4 that DIA administrators are currently tweaking their travel policies but she said with respect to business class travel, that won't change.

Barnes-Gelt said what the airport is doing "looks terrible. The message is we don't care what you think. I mean it's just nonsense. Clearly they got their hands in the cookie jar."