"We have all been at his house while his wife was gone, sitting in his garage smoking dope," said William Hadley, a meth user and close associate of the former Sheriff. "I mean we've sat at Cheesman Park in his (Sullivan's) SUV and smoked the F--- out of a lot of dope."

His comments were videotaped by Jonathan Elinoff, a producer for radio talk show host Tom Martino. The tapes were obtained by CBS4 Nov. 23.

Authorities arrested the 68-year-old former sheriff Tuesday afternoon at an Aurora home after they say he attempted to trade methamphetamine for a sex act from a male acquaintance.

"Pat has bought dope for several people I do know," Hadley said, "to help get them in the mood."

Hadley acknowledged performing a sex act in front of Sullivan.

"I (masturbated) in front of him at his request," Hadley said.

Hadley said he met Sullivan through friends in 2006. The two became close, with Sullivan alternately helping Hadley and providing him and others with illegal drugs.

"He buys them drugs in order for them to take their clothes off. That's the power he has over them, their addiction," said a second man interviewed by Elinoff on videotape about Sullivan.

The 29-year-old man told Elinoff Sullivan met gay young men at Denver's Cheesman Park. He said he met Sullivan when he was a teenager.

"Did Sullivan ever try to take advantage of you?" the man is asked.

Sullivan has declined media requests for an interview.

Sullivan was the elected Arapahoe County Sheriff for 19 years. He retired in 2002 and went on to become director of safety and security for Cherry Creek Schools. He was a nationally-regarded law enforcement figure and in 2001 as the National Sheriff Association named Sullivan "Sheriff of the Year."

According to public records, in 2007 and 2008 Sullivan was an active participant in state and local methamphetamine task forces, helping craft a state plan to deal with the scourge of methamphetamine. 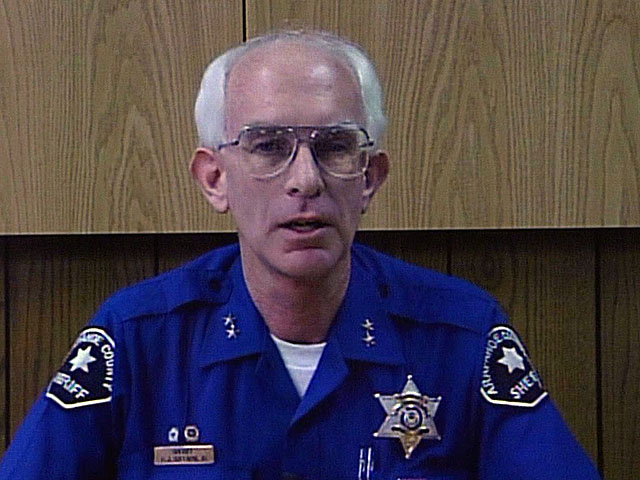 The National Association of School Resource Officers gave Sullivan a Lifetime Achievement Award in 2002. At the time the executive director of NASRO, Curtis Lavarello, said of Sullivan, "You are not only committed to the SRO concept, but have truly spent your entire career making every effort to keep children safe."

Sullivan served in law enforcement for 40 years, beginning in 1962 as a Littleton police officer and dispatcher. He joined the Arapahoe County Sheriff's Office in 1979 as a captain and patrol division commander. He was named undersheriff in 1983 and appointed to the top job 6 months later.

President Bill Clinton named Sullivan in 1995 to the National Commission on Crime Prevention and Control. According to a 1995 White House news release, Sullivan was a consultant to U.S. House Subcommittee on Crime and served on two advisory councils affiliated with the Department of Justice.