DENVER (CBS4) - Holiday travelers will have a tough time getting through the mountains of Colorado on Sunday as a new winter storm crosses the state. In addition to heavy snow this storm will bring a lot of wind. The combination of wind and snow may create white-out conditions at times, especially on higher and exposed mountain passes.

Snow Squall Warnings will be possible in the mountains, especially during the afternoon hours. A snow squall warning means there is an imminent threat to travel across the warned area. It's a similar concept to a Severe Thunderstorm Warning. 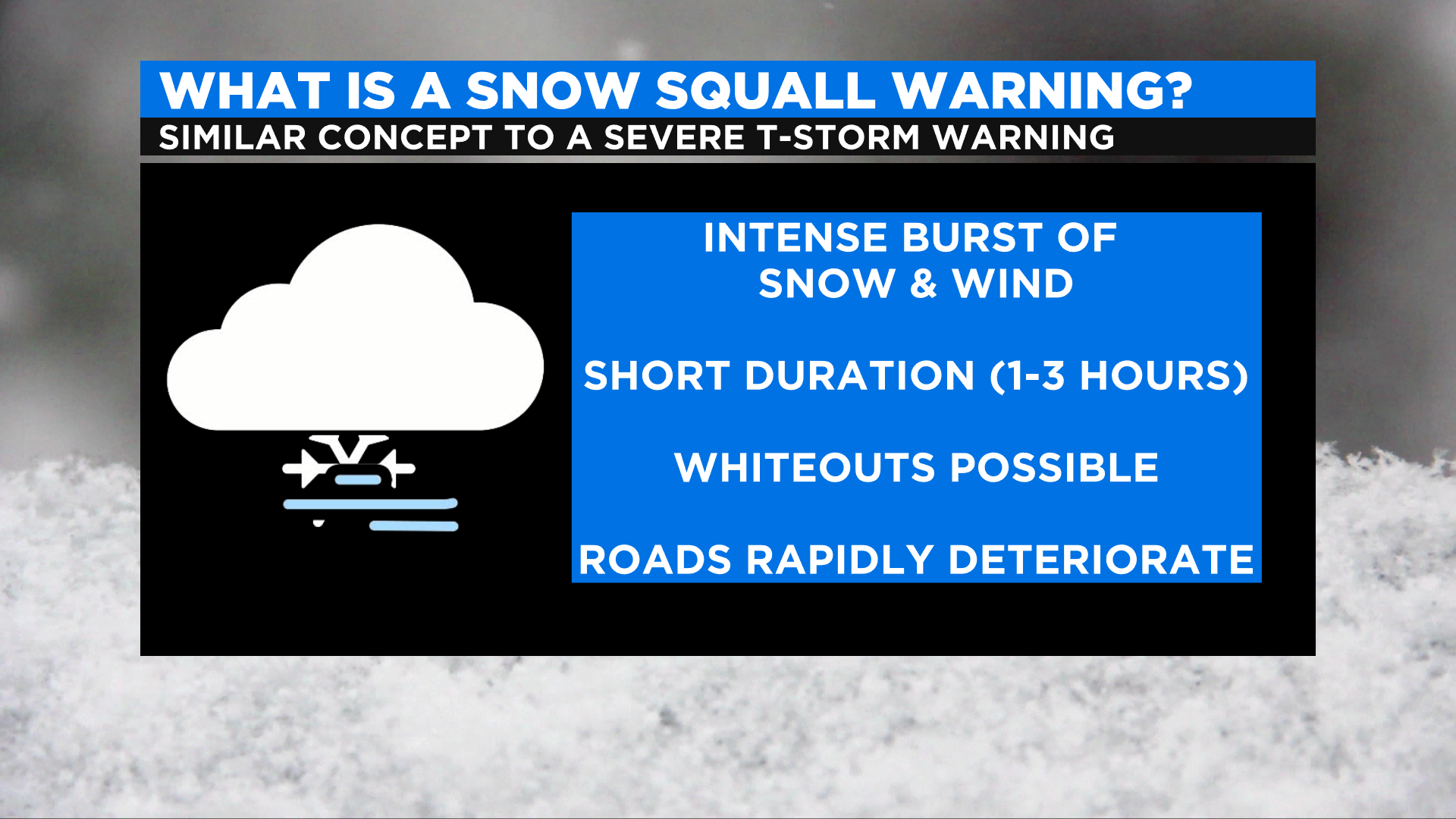 The timing for the most intense wind and snow will be during the afternoon and early evening hours on Sunday. While the intensity will let up overnight some places could still experience blowing and drifting snow into the early hours on Monday. After a brief break late Monday morning more snow will arrive by the evening and last into Tuesday. 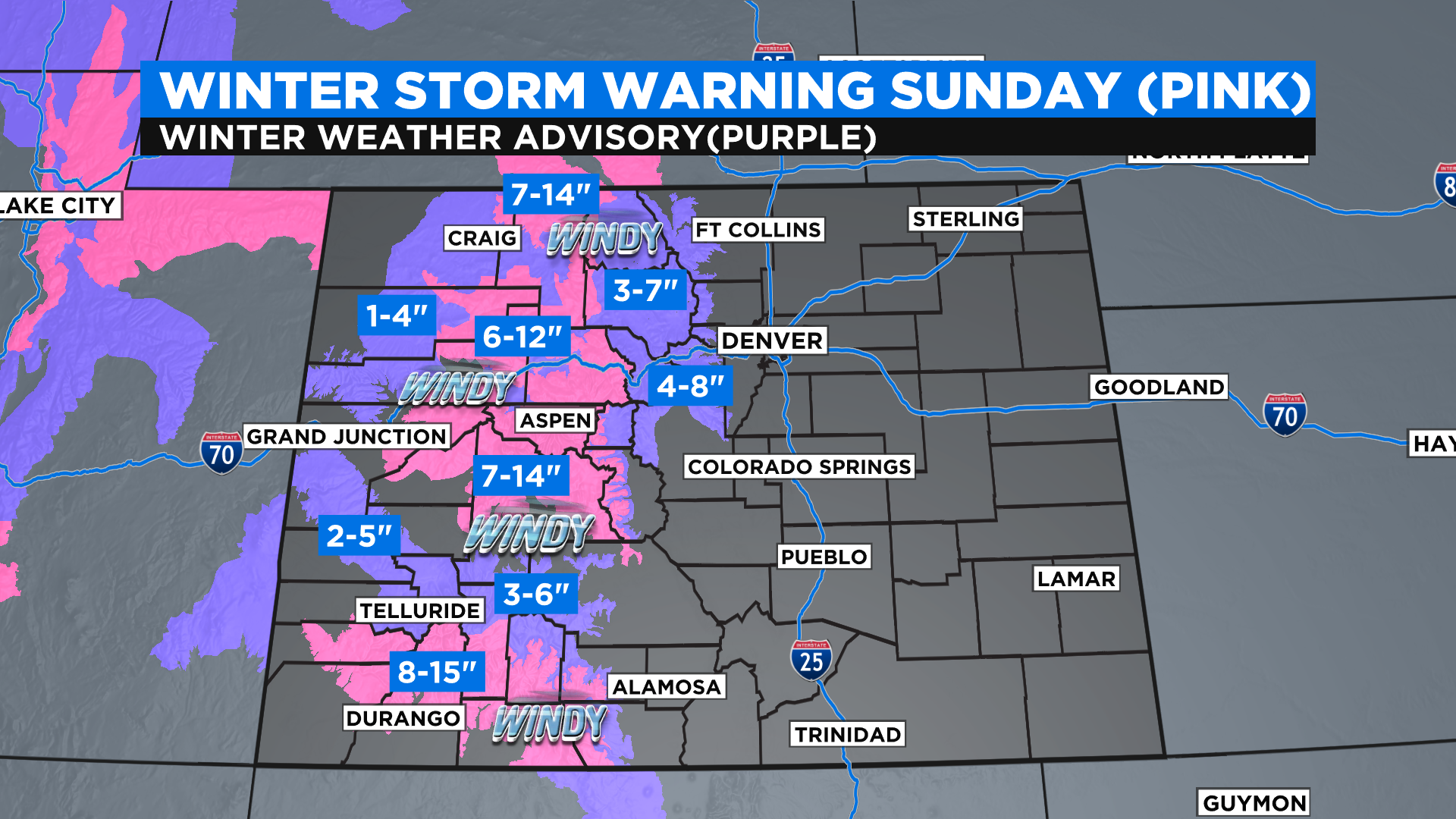 Most all of Colorado's mountains are under a Winter Storm Warning (pink) or a Winter Weather Advisory (purple). Many places will end up seeing anywhere between 6 and 14 inches of snow. Amounts will be lighter in valleys but travel could still be just as dangerous due to the wind.

The new snow will create additional concern for avalanches, especially in the backcountry. Most all mountain zones are under an Avalanche Warning through Monday morning. 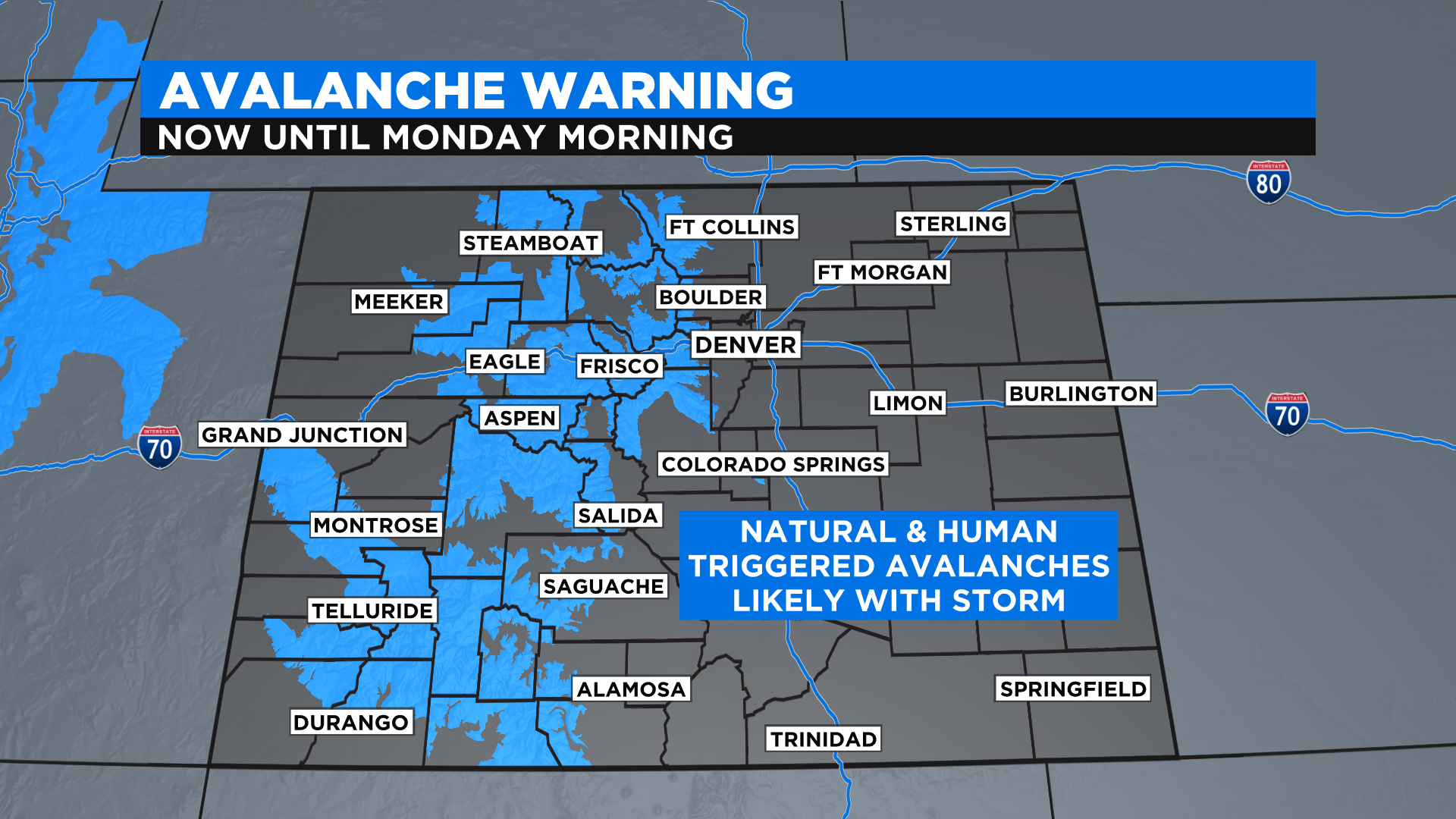 For Denver, the Front Range foothills and the eastern plains it will be dry on Sunday but very windy at times. In fact parts of central and eastern Colorado are under a High Wind Warning for the potential to see wind gusts between 60 and 80 mph.

While we don't have any precipitation in the forecast for Denver and the Front Range, sometimes in scenarios like what we have today, a few snow showers can push across the foothills and into the I-25 urban corridor. If that were to happen it would most likely be after 3 p.m. and before midnight.

Because it has been so dry and warm, the wind will cause the fire danger to be high for a large part of east-central and southeast Colorado. Those areas will be under a Red Flag Warning between 10 a.m. and 5 p.m. on Sunday. 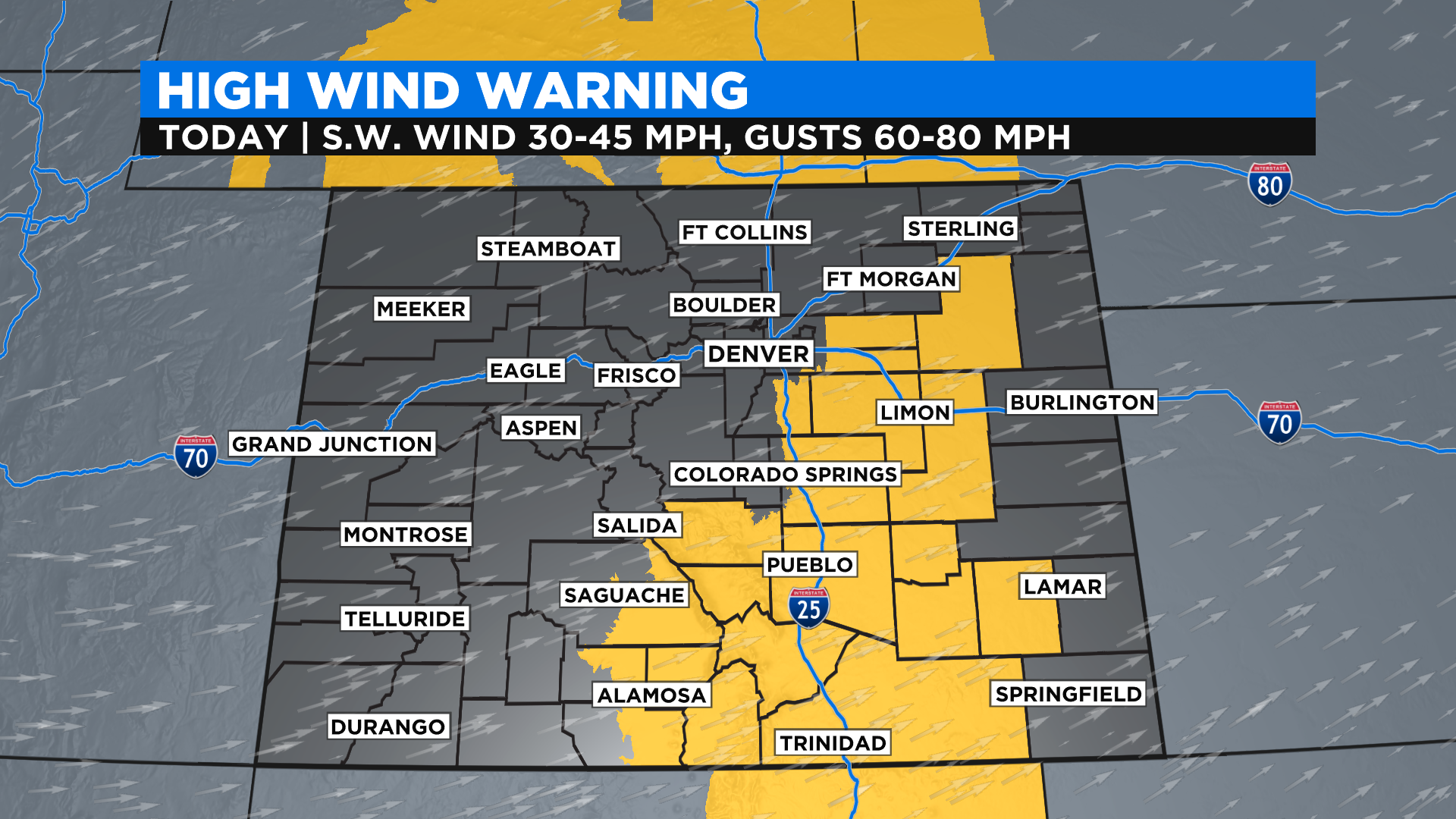 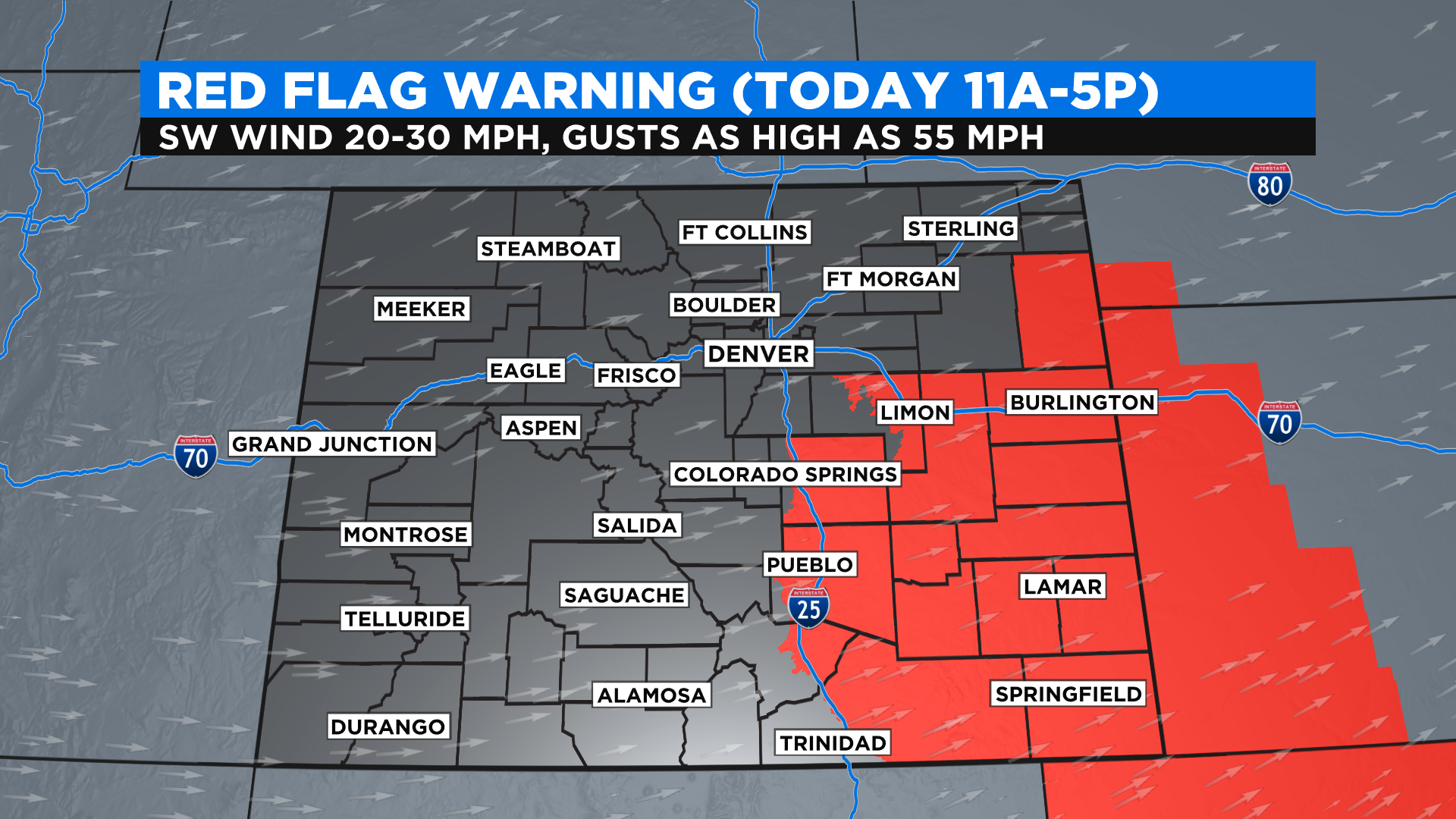