SILVERTHORNE, Colo. (CBS4)- Hundreds of residences in Silverthorne are under evacuation orders after a fire broke out on Buffalo Mountain Tuesday morning and sent up a huge plume of smoke.

The Buffalo Fire is burning southwest of downtown Silverthorne near the Wildernest and Mesa Cortina neighborhoods, and both areas are under evacuation orders. 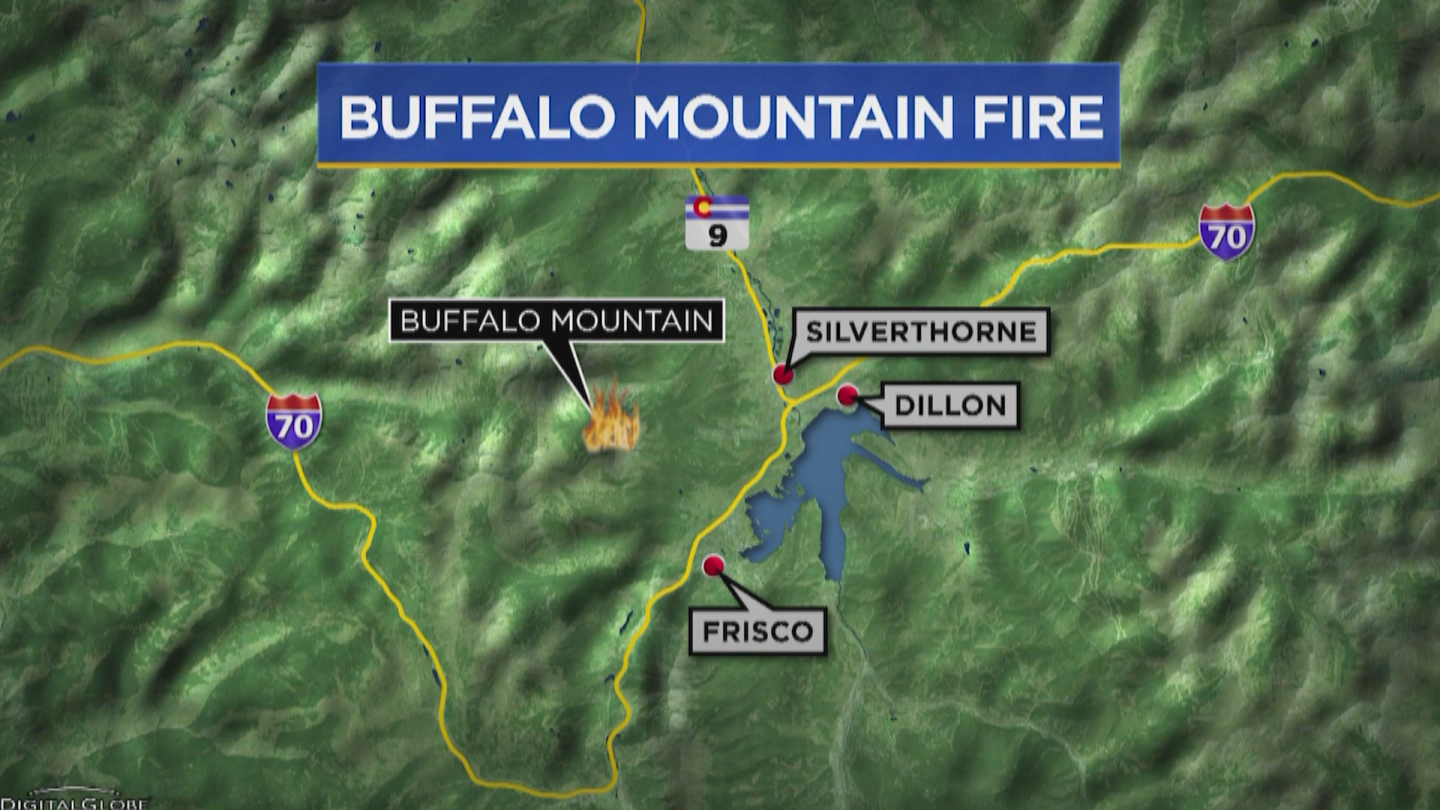 Fire officials say the fire appears to have started in U.S. Forest Service land between the Mesa Cortina and Buffalo Mountain trailheads.

No structures have been lost at this point, but the Copter4 crew that flew near the fire saw the flames burning very close to homes and fire retardant drops being made next to and on roofs in some places.

The following areas are under mandatory evacuation orders (1,384 residences total):

The following area is on pre-evacuation notice:

"Pack up and be ready to go now," Summit County officials tweeted to those under pre-evacuation orders. There is no time frame on when those evacuation orders will be lifted.

Overnight sheltering has been made available at Frisco Elementary School at 800 8th Avenue in Frisco.

The fire is at 91 acres and is still growing. Officials in Summit County said the fire was sending out embers which were spreading the fire. Fire officials asked Xcel Energy to shut off the power to the upper half of the Mesa Cortina and Wildernest subdivisions out of safety for the firefighters in the area.

Ground crews from approximately a dozen different fire agencies have responded to the fire. A total of 50 firefighters were working on the fire at 2 p.m. and 100 more were heading to the scene.

The attack on the fire from the air involves a heavy air tanker, a Type III helicopter and an air attack plane. Officials have also ordered several more firefighting aircraft.

Officials briefed media at a 4 p.m. news conference. They say the biggest reason why they've been able to keep the fire from moving into the subdivisions are "fuel breaks" that were put in place over the last several years.

Buffalo Fire evacuees are asked to go to the Silverthorne Recreation Center (430 Rainbow Drive) for shelter, and people with concerns about pets are asked to contact the Summit County Animal Shelter.

Charles Pitman was evacuated from his home in Silverthorne Friday morning.

"One of the things about Wildernest is there are a lot of people up there who work in the county. A lot of townhomes, a lot of condominiums. And so a lot of people are not at home," he said.

"We were home when it happened, but most people aren't and so there was a lot of traffic going up to the mountains back up to the top of Wildernest trying to get out."

Officials in Summit County announced the the following trails are all closed due to the fire:

On Tuesday afternoon, officials issued a smoke advisory due to the fire and said people should generally stay indoors if heavy smoke is present for health reasons. Stage 1 fire restrictions were also implemented hours after the fire ignited. Officials say the ban was planned ahead of the unforeseen fire.

Officials in Summit County also requested that no one use drones in the area. "This is a NO DRONE ZONE. Please keep all drones grounded as our emergency services respond!!" they tweeted.

Gov. John Hickenlooper issued a statement Tuesday about all of the wildfires happening in the state:

Colorado has allocated more resources for fire fighting than any other state in the Rocky Mountain West. We have seven interagency heavy air tankers fighting the Colorado fires and, through experience, we have learned how to integrate our state resources with our federal, county and municipal resources. We recognize the conditions are dry and hot. Public health and safety are the top priorities in fighting any fire. If you are in the fire zones, please follow safety procedures and directives. Our state agencies are here to support you. As we have proved time and time again, Coloradans are resilient.