DENVER (AP) — Republican gubernatorial candidate Walker Stapleton warned Wednesday that Democrats want to impose job-killing restrictions on oil and gas development in Colorado, while Democrat Jared Polis said the state has to try to settle persistent conflicts between the industry and neighborhoods. 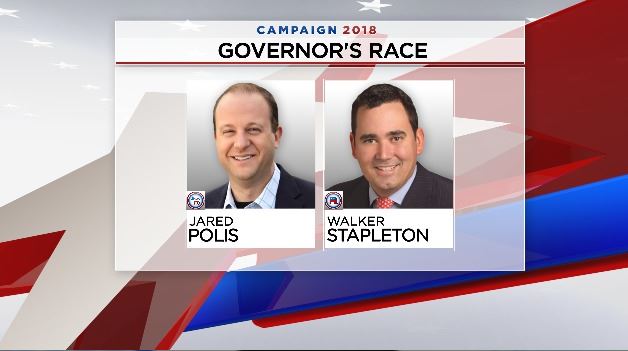 Polis was interrupted three times by protesters as he and Stapleton made separate pitches to the Colorado Oil and Gas Association's annual Energy Summit in Denver.

The protesters stood and asked Polis about fracking and climate change. The audience booed, and the protesters were escorted out.

Polis didn't address the protesters directly. But he drew laughs when he pointed out the third interruption came just as he was lamenting the strident tone of the debate over oil and gas in Colorado, where drilling rigs and storage tanks intermingle with schools, homes and hospitals.

That proximity fuels disputes over public health and safety.

Polis, a five-term congressman from Boulder, and Stapleton, in his second term as state treasurer, are campaigning to replace term-limited Democrat John Hickenlooper

Stapleton and Polis both said they oppose a ballot initiative that would increase the minimum distance between new wells and occupied buildings — called setbacks — to 2,500 feet (762 meters). The current minimum distance is 500 feet (150 meters).

Both said the measure would essentially ban new hydraulic fracturing or fracking wells in Colorado. Hydraulic fracturing uses a pressurized mix of water, chemicals and sand to loosen underground rock formations and release oil and gas.

Stapleton, who spoke first, said Polis once financed a similar measure that would have set a minimum distance of 2,000 feet (610 meters).

The measure Polis supported was withdrawn, said he said Wednesday he has never supported a fracking ban, "no matter how much Walker Stapleton may wish I had."

Stapleton said Colorado can have both a clean environment and a thriving fossil fuel industry.

"We can have it all, and anyone who says differently is presenting you with a false choice," he said.

Stapleton said the oil and gas industry is vital to the state's economy, and Colorado cannot quickly switch to renewable energy, which he said is more expensive and would saddle the poor with higher costs.

Polis offered more measured praise of the oil and gas industry, saying it creates jobs and tax revenues but also stirs conflicts and fears about health, safety and the environment.

He did not rule out increasing setbacks, although he referred to making them "stronger" rather than longer.

Polis also argued for giving local governments more of a voice in regulating the industry. The change could be as simple as letting towns enforce noise ordinances on drilling rig operations at night, he said.

Previous attempts by cities to regulate or ban drilling have been slapped down by the Colorado Supreme Court, which ruled that only the state can regulate the industry.

Local governments try imposing fracking bans because existing laws don't give them "a meaningful seat at the table," Polis said.