JEFFERSON COUNTY, Colo. (CBS4) - A 38-year-old cold case in Jefferson County has been solved using genetic genealogy. Investigators say they've identified the killer of 18-year-old Jeannie Moore as Donald Perea, who was born in 1957 and died in 2012.

Moore disappeared on Aug. 25, 1981 while hitchhiking to work in Jefferson County.

Strangers having a picnic found her body in Genesee Park five days later. Investigators say she had been beaten and raped.

"Based on the statistics and the DNA, this is the guy," investigator Mitch Morrissey said. Morrissey is the former District Attorney of Colorado's Second Judicial District in Denver.

Investigator say genealogy DNA and reverse paternity testing led them to Perea. They used programs called GEDmatch, an open-source website, and Family Tree DNA to find people who shared common DNA to the suspect. GEDmatch was used by law enforcement to identify a suspect in the Golden State Killer case in California.

"Anybody that has their ancestry results or their 23 and Me results that want to help law enforcement solve cases, go to GEDmatch, upload your data and say 'Yes' to the question 'Do you want law enforcement to have your data?'" Morrissey urged.

"It was Family Tree DNA that gave us the most significant lead in this case. For a few hundred dollars, law enforcement can upload their sample into Family Tree... and then you search for people with common DNA to the DNA that you're looking for."

"Then there's a whole system where genealogist can look at it and say 'OK, based on how much you share, this is likely a first cousin,' or 'This is likely an uncle' or 'This is likely, you know, some other relative.'" Morrissey explained. "What this allows you to do is go out to about fourth cousins. On average, a person has about 850 cousins out there in the world."

Morrissey said they used DNA from Perea's biological daughter to match him to samples taken from the crime scene. 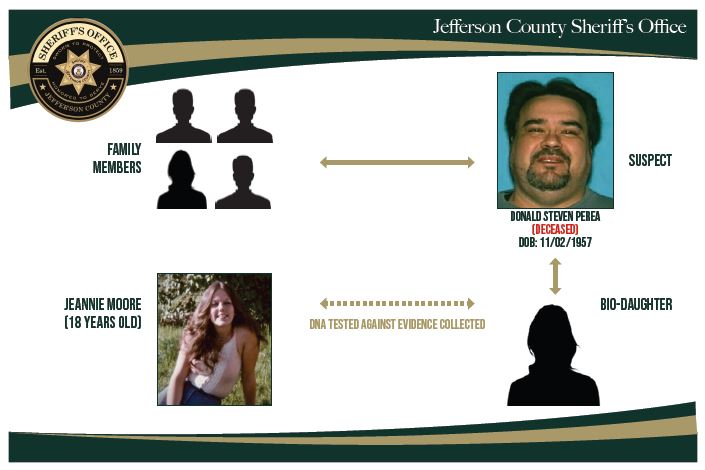 "There's nobody else out there in the world that would have a statistic like we have in this case," Morrissey said.

"The only thing that is not a good thing about today is that we can't hold this individual accountable because God took him before we got the chance," he said.

Morrissey said Perea was accused of a kidnapping and rape in Wesminster and was out on bond when he raped and murdered Moore. He was 23 at the time.

"He had been arrested for sexual assault where he had a weapon and he had been charged but he had posted bond and was out when he picked up this victim and did what he did to her."

Perea was eventually convicted for the rape and was in prison from 1982 to 1985. Investigators say he died from health problems in 2012.

Investigators thanked Perea's family for cooperating and helping them solve the case.

CBS4 sat down with Moore's family Tuesday who said they received the news only five days ago.

Moore was one of eight siblings. Kelly says the family lost their father early in life and his sister was like a second mother.

Moore would have been 55 on Tuesday. Kelly and her sister Mickie are in their early 50s. They say that while they still fight like siblings on occasion, Moore would've been happy to see that they are still together.

The sisters say it's too soon to call the news of the DNA results closure.

"At least he's gone. I'm sorry. I hate to say that about another human being but ... I think he's a monster," said Mickie Moore.

The Moore family says their lives were derailed in 1981 and the last 38 years have been spent wondering and pointing fingers at all the wrong people, including a family member.

"It's drug up a lot of memories and a lot of guilt on my part," said Kelly.

Kelly was just 16, and recalls being crabby with Jeannie. Jeannie was running late and left in a huff. Her family shared a car and Jeannie decided to hitchhike to work. Pera picked her up shortly afterwards and Jeannie was never seen again.

"He took away an angel."

The family has connected with Pera's family and says they hold no grudges.

The sisters say they will continue to keep her memory alive on a daily basis and hope by sharing her story, it will remind others to be vigilant.

"She was 18 and tough as nails but still, it doesn't matter," said Mickey.