Officials have ordered mandatory evacuations for:

Some of the areas were previously under voluntary evacuation orders but those have been upgraded to mandatory.

Members of the Colorado National Guard were directing evacuees on Monday afternoon.

A Colorado National Guardsman advised a motorist at Rist Canyon, "Don't be alarmed this evacuation is mandatory if something happens we will probably come and grab you."

Candace Andrasik grabbed what she could. She's had practice. Her home burned down during the 2012 High Park Fire near here.

"To go through this again is traumatizing emotionally," she told CBS4's Rick Sallinger.

Sallinger met her at an evacuation center. The Red Cross is assisting people with support however they need it at this critical moment.

Warren Parks and Amy Adams also evacuated their home in Buckhorn Canyon after the fire's rapid growth overnight. On Monday they stopped by the evacuation center at Cache La Poudre Elementary School to get help from the Red Cross.

When asked if incoming snow gave them hope for their home, Parks said it was likely "too little too late."

"It's bittersweet knowing it'll come too late," said Parks. "Probably everything we own is burned and now it'll be covered in snow."

The fire exploded in size over the weekend - a reported 96,452 acres as of Monday night. It is now the seventh largest fire in Colorado history. It is just 4% contained. It is burning 25 miles east of Walden and 15 miles southwest of Red Feather Lakes. 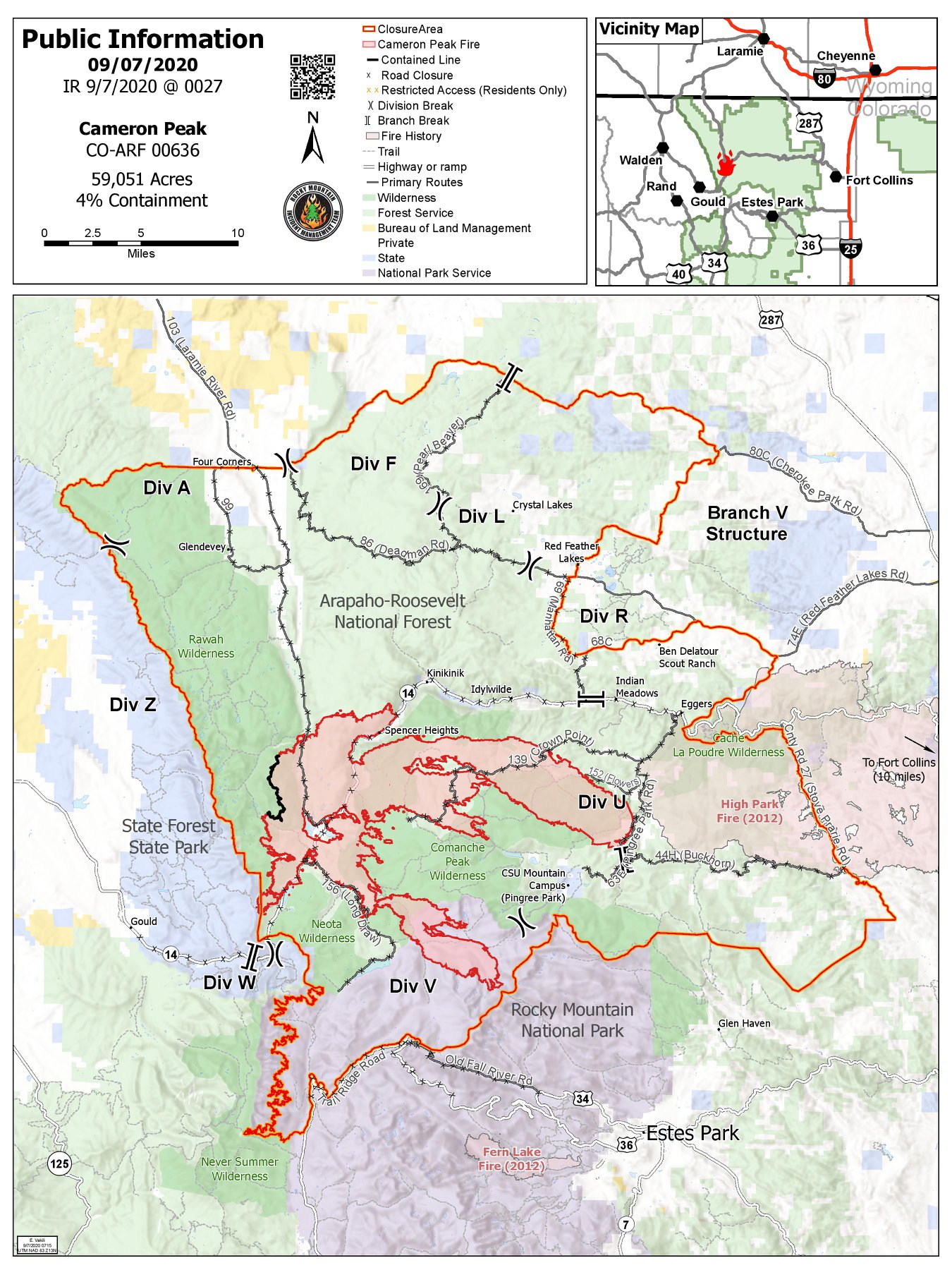 "We've seen tremendous growth," said Larimer County Sheriff Justin Smith on Monday afternoon. "It's getting into areas with structures. And we've had to pull the pin on evacuations at a level that we'd never expected."

On Sunday, people living on Buckhorn Road, from Pennock Pass to County Road 27, were ordered to evacuate.

On Saturday, mandatory evacuations were ordered for people living on Pingree Park Road, Highway 14 from the Fish Hatchery east to Kelly Flats.

Cache La Poudre Middle School on County Road 54G in Laporte will serve as a shelter. Small animals can be taken to the Larimer County Humane Society. Those with large animals are asked to contact Troy Badberg at 970-443-3231.

Lilly Ellis was with friends at the evacuation center. She, too, had lost a home in a previous wildfire.

"We're kind of scared because our house burned down in the High Park Fire," she said.

Andrasik doesn't want to lose her home again, "Oh my goodness gracious, we were out about three years living in a friend's home, thank goodness for Habitat for Humanity that helped us build a home."

The fire created a huge plume of smoke that was be blown through Fort Collins, down to the Denver metro area, and out east across the state. It caused hazy skies and created unhealthy air conditions.

Those who live in the evacuation areas were caught between the forces of nature, hoping and praying that a cold front with snow would arrive before the flames.