AURORA, Colo. (CBS4) -- Aurora police said demonstrators pushed down a fence, threw fireworks and other objects at officers, and broke windows and started a fire inside the courthouse Saturday night. The protests are part of an effort to seek justice for Elijah McClain, who died after an altercation with Aurora police nearly one year ago.

"This has been declared an unlawful protest," police tweeted.

"[Protesters] are now throwing objects, shining lasers, and shooting large fireworks at officers," police tweeted at 8:45 p.m. "Everyone needs to leave the area immediately. If you remain, you are subject to arrest."

Police said protesters tore down the wood covering windows and used the wood as "shields." They broke windows to get inside and started at least one fire.

"There has been a fire started inside of an office in the courthouse," police tweeted at 8:50 p.m. "Protestors need to leave the area immediately."

Just after 9 p.m., police announced the fire has been extinguished.

"It does not appear to have spread anywhere else inside of the building. Protestors needs (sic) to leave the area or are subject to arrest. You can safely exit the area to the south.

More than 20 windows at the courthouse were broken.

Police say most of the vandals who broke into the courthouse were wearing masks and one of the security cameras was covered with a plastic bag, making it difficult to identify the people involved.

Investigators want to talk to any witnesses to the vandalism and damage that happened on Saturday night.

Just before 10 p.m. protesters moved away from the Aurora Municipal Center and blocked Alameda Parkway. Police tweeted that drivers need to avoid the area.

Earlier in the evening, protesters marched on Interstate 225, and at least one person was shot as a vehicle drove through the crowd blocking the highway.

"While the protestors were walking on I-225, a vehicle decided to drive through the crowd. A protestor decided to fire off a weapon, striking at least 1 other protestor. They were transported to the hospital in stable condition," APD tweeted.

RELATED: Jeep Races Through Protesters On I-225 In Aurora, 2 Shot When Protester Fires Gun

"Someone else showed up to the hospital with a graze wound," APD tweeted. "The vehicle was towed and we are investigating that incident. Any witnesses to the shooting are urged to call @CrimeStoppersCO." 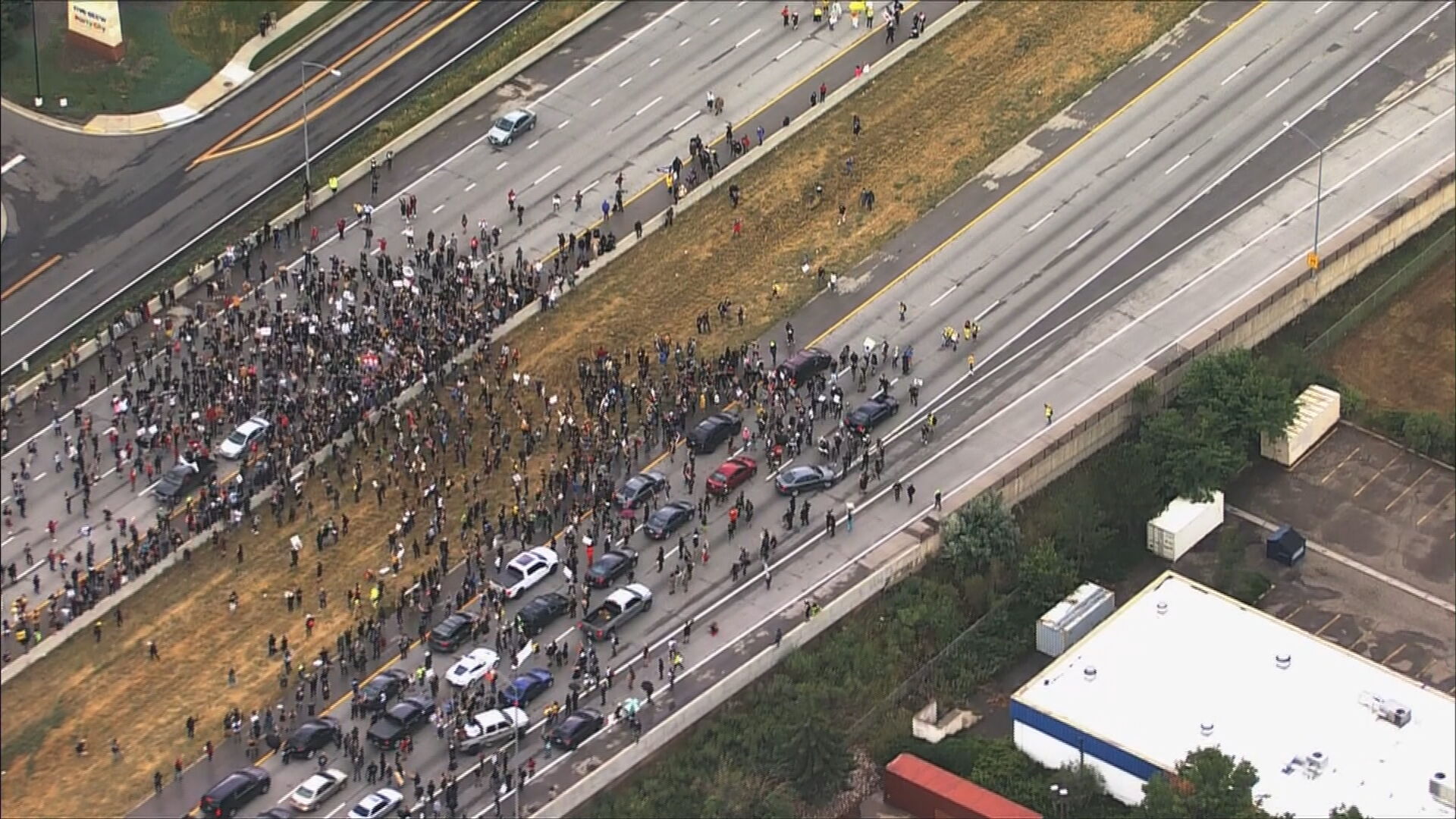 The suspect vehicle is described as a blue Jeep. Copter4 captured the video of the Jeep speeding through the protest as people scattered and tried to get out of the way.

A short time later, Copter4 flew over as police had pulled over what seems to be a vehicle matching the same one that sped through the protest on I-225.

Police contacted the driver of the Jeep shortly after the incident on I-225. The Jeep was impounded but the driver has not been arrested.

Investigators are still looking for the person who fired shots, hitting two protesters. They are asking for the public's help to identify the gunman.

Both of the injured protesters remained in the hospital on Sunday morning, in stable condition, with non-life threatening injuries.