CHICAGO (CBS) -- Just when it seemed like spring was finally here to stay, Old Man Winter plans to rear his ugly head this weekend, with several inches of snow possible in Chicago on Saturday.

The National Weather Service on Friday afternoon issued a Winter Storm Watch for Saturday. Friday evening that watch was upgraded to a warning for Lake and McHenry counties.

Friday was gorgeous, with sunny skies and a high around 65, but this weekend will be dreary, including 5 to 8 inches of snow along the Wisconsin border. 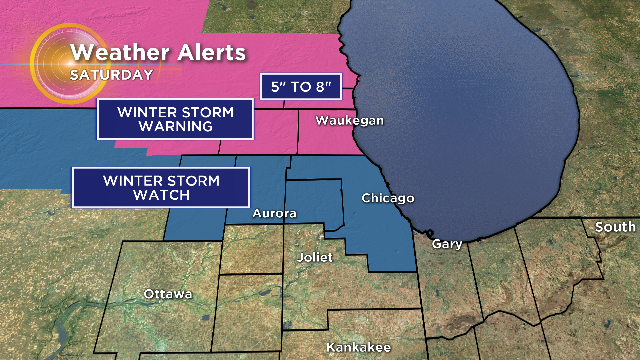 Areas south of that, including Cook County could see up to four inches of snow.

Locations south of Interstate 80 may not see much snow at all.

Rain will start to move in late Saturday morning or early Saturday afternoon, with snow mixing in later in the day, with more consistent snowfall by Saturday night, mostly north of Will and Kendall counties. Snowfall rates could be as heavy as 1 to 2 inches per hour at times.

If the heavier snowfall models hold true, this weekend's storm could break a record for April. The heaviest snowfall in April was 5.4 inches, which has happened twice – on April 14, 1961, and two weeks ago, on Palm Sunday, April 14.

How much sticks is question, with temperatures hovering in the mid 30s, so the snowstorm could be very similar to the Palm Sunday snowstorm a couple weeks ago, when it snowed virtually all day, but not most of it melted, with some slushy accumulation.

Whatever does stick on Saturday should melt quickly, with temperatures rising back to about 50 on Sunday.

Next week will start with a chance of showers on Monday and Tuesday, with highs in the mid 50s, before a return to the upper 50s Wednesday and Thursday.