In Batman: Arkham Knight, you're a sad dad whose idea of bonding is busting the balls of your teen son to "toughen the kid up." Your spirit is that of a middle-aged man in cargo shorts and a windbreaker, a tennis coach the moms don't want to sleep with. You're present when you need to bail your attention-starved daughter out of jail, but have never hugged her once in your life.

For hardcore fans of the series, Batman: Arkham Knight delivers on nearly every front. For those of us capable of acknowledging its flaws, it's both innovative and frustratingly half-baked. It's difficult to know which qualities -- the good or the bad -- win out in the end.

Sad dad Batman's open world is beautiful. The visuals – assuming you're not on the PC – never fail to stun (I played the PS4 version). And gliding through the gigantic city never ceases to be a joy. At the beginning, a forced story point evacuates Gotham of everyone who isn't a criminal, which is a bummer, but you're happy to shrug that off for a chance to play on sad dad Batman's most gorgeous playground yet.

Gotham city is jaw dropping, but the wow factor quickly disappears when you find yourself forced to use the Batmobile in ways that seem antithetical to the nature of the game. For a game that's otherwise effortlessly fluid, it's depressing that the Batmobile often feels like s speedbump in the middle of the highway.

The biggest culprit? Tank battles. It is NOT fun to fight tanks in the Batmobile. And there are a lot of tanks! Sure, you've got the weaponry to do it, but I'm not playing a Batman game to repetitively kill tanks. The dodge-shoot nature of these tank battles feels far removed from the otherwise smooth fighting system.

There are also moments where you're forced to nimbly navigate the Batmobile across a city-turned-obstacle-course, which feels annoyingly forced. In fact, most missions that utilize the Batmobile reek of desperation. It's as if Rocksteady Studios were suddenly struck with the fear that they weren't using the Batmobile enough halfway through production of Arkham Knight, and assuaged their fears by awkwardly sticking the Batmobile in multiple main-story missions at random.

Whenever I realized I needed to use the Batmobile to finish a mission, I'd let out an exasperated sigh, feeling as if I were 15 again and my mom was telling me to take out the trash...

... BUT I don't WANT to take out the trash, Mom! I WANT to play DREAMCAST.

When it comes to the characters, there's a lot Arkham Knight nails. The Riddler is a joy to listen to, his narcissism creating more than a few laughs. Also, the Joker, represented in hallucinations throughout the game, is at his absolute best in Arkham Knight. It's too bad the overall plot wasn't as creative as these portrayals.

The most obvious piece of the plot to pick apart is the fact that every character close to Batman gets kidnapped. I'm not exaggerating when I say every character. Every other plot point is literally the kidnapping of one of sad dad Batman's sidekicks, buddies or favorite coffee shop baristas.

Also, terrible things never stop happening in the game. I'm assuming this was an attempt to keep "raising the stakes" – to make the odds against Batman seem insurmountable – but it just created a boring pacing for sad dad Batman's story. Tragedy quickly became the baseline for Gotham, making every tragic twist and turn seem mundane.

The combat system in the Batman: Arkham games is truly perfected in Arkham Knight. The enjoyment that comes from figuring out the best method to take out a group of enemies, and then to execute it with a perfect series of combos, is immense.

I'm not alone when I say this is not my Batman. Fanboys of the Arkham games will label me a subjective hater and a bad writer for saying this, but I could really care less. For some, Arkham Knight's overt, unrestrained violence seems opposite of the control Batman's supposed to possess. For others, a Batman game should be more substantial narratively, doing a better job of illuminating Batman's relationship to his partners, Gotham's villains and the city itself. 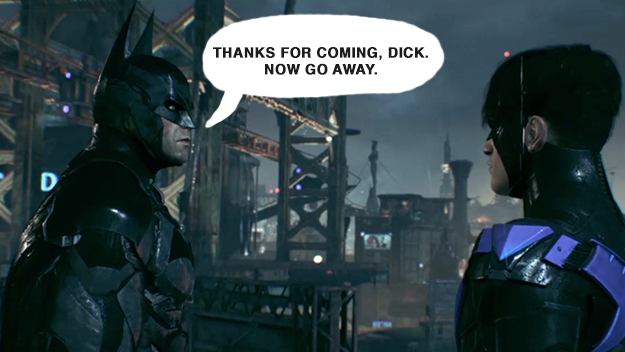 For me, it comes to the one question most Batman writers have attempted to tackle: Which is the mask, Batman or Bruce Wayne? In Arkham Knight, this question doesn't exist. Sad dad Batman is sad dad Batman, end of story. Hope you like breaking the bones of criminals!

Whose fault is this? Is it our fault for taking perverse joy in Batman's ability to wreak havoc? Is it Rocksteady's fault for interpreting that joy to mean they need to design a bigger sad dad Batman with bigger explosions? This may be the Batman gamers deserve, but maybe that means we're the fans Batman doesn't deserve. Maybe Batman deserves better.

Amidst the backdrop of a beautiful city and highly inventive scenes where Batman abstractly conquers his fears, there isn't a whole lot of literal growth in this, the last chapter of sad dad Batman. You never see him literally come to terms with his role, or more importantly, become a better friend and father. If you judge a character by what he learns on his journey, by the questions he would answer differently at the beginning and end of that journey, then you have little to judge sad dad Batman by. I'm not convinced sad dad Batman, were he to find himself in the same situations again, would do anything differently.

So play Batman: Arkham Knight! Marvel at every aspect it perfected and take joy in Batman's ability to expertly thwart groups of thugs. But when you find yourself frustrated at shoddy game mechanics with the Batmobile, predictable or thoughtless plot points and a lack of character development, don't feel guilty as you put the controller down and go play something else.